Some research material used for this op-ed.

Excellent IFC report on private sector job creation. I have blogged earlier about India's jobs crisis. The IFC report confirms that micro-enterprises form an overwhelmingly large share of job employment in both manufacturing and services sector in India. However, in developed countries, larger firms contribute the major share of employment. 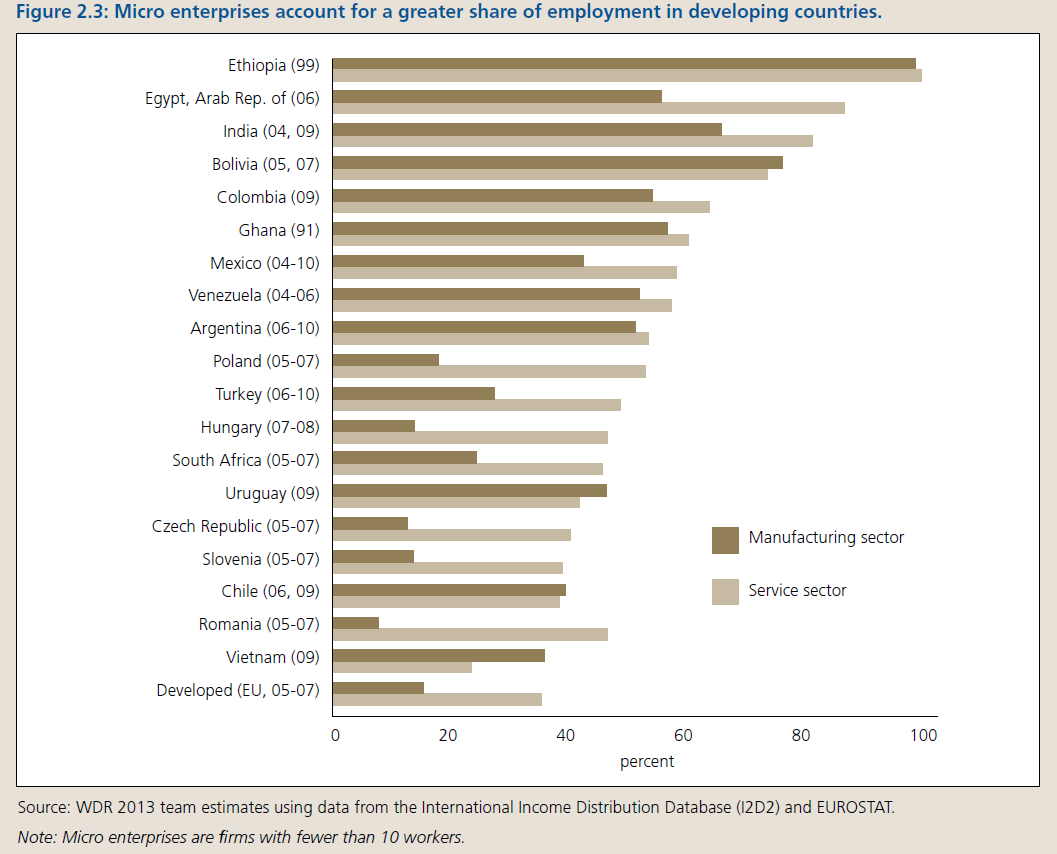 But the most disconcerting feature of these micro-enterprises is that they remain small and even decline with time. Further, their productivity remains stagnant over the life-cycle, in sharp contrast to that of firms from the US, whose productivity and job creation increases sharply.

This graphic highlights the difference in firm birth and growth dynamics between developing and developed countries. In developed countries, many surviving firms are born small and then grow into bigger firms. In developing countries this is frequently not the case: surviving firms are either born large and do not grow much, or surviving firms in fact decline in size. When the size of 35-year-old firms in India, Mexico, and United States is compared to their size at startup, in India the size declines by a fourth, in Mexico the size doubles, and in the United States it is 10 times larger. These patterns may reflect the fact that small and medium-size firms in low-income economies are faced with constraints 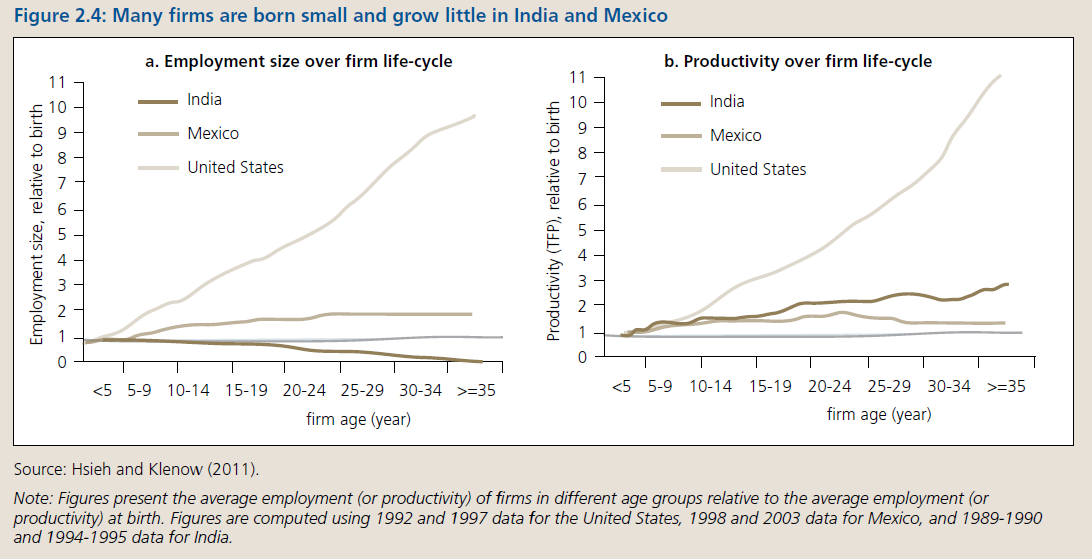 The World Bank Group’s Enterprise Surveys data, which analyzed responses of over 45,000 small and medium enterprises in 106 developing countries shows access to finance, electricity, and informality as the three biggest constraints facing firms. 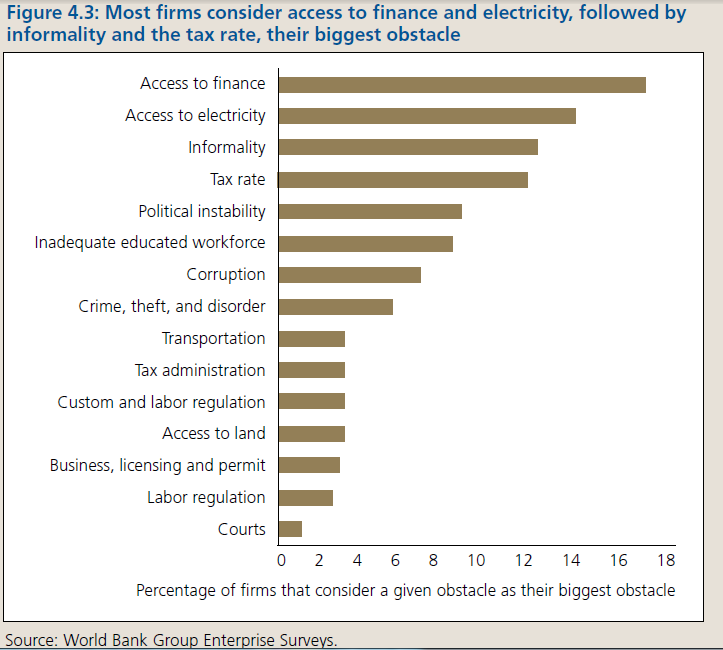 A categorization of these constraints reveals that investment climate - or the legal and regulatory framework and its implementation - is the largest group of constraints. They include informality, tax rates, customs and labor regulation, tax administration, business licensing and permit, courts, access to land, and corruption. 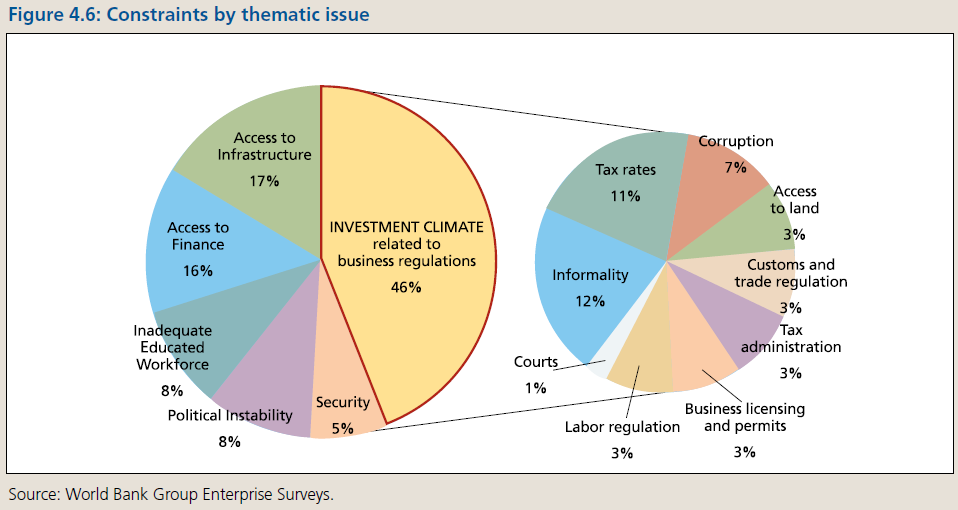 In the context of large numbers of informal firms, one of the biggest concerns for India is the "missing middle" or the disproportionately low number of intermediate sized firms. 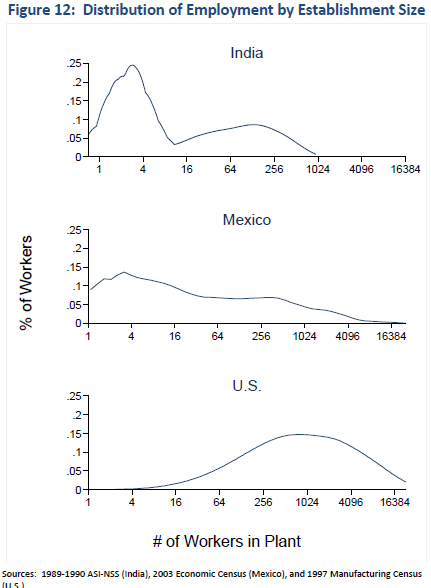 Clearly, unlike the US or even Mexico, there is a pronounced deficiency of intermediate sized firms in India. The most likely explanation is that the informal firms which dominate the sector, employ too few workers and very rarely grow out of their informality, while the formal firms are most likely to be large given the various labor market restrictions and credit and other constraints that would work against intermediate sized formal firms. In fact, as the graphic below shows, the number of workers employed by even formal firms remain stationary with time. 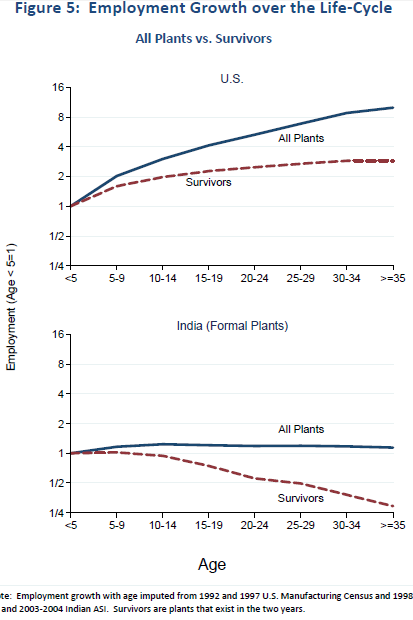 Interesting take on IFC report on private sector job creation. Thanks for bringing to our notice about these important points. Pretty informative!