Inequality has been widening across the world. A recent ADB report expressed concern at the rapid rise in inequality in emerging economies and warned that it puts at risk the spectacular recent economic progress of these economies. In this context, Paul Krugman points to an exploration by Lawrence Mishel of the various causes of this widening inequality.

He has two illuminating graphics that highlight the magnitude of its contribution. The first graphic illustrates the cumulative growth in productivity per hour worked of the total economy (inclusive of the private sector, government, and nonprofit sector) since 1948 and the cumulative growth in inflation-adjusted hourly compensation for private-sector production/nonsupervisory workers (a group comprising over 80 percent of payroll employment). Notice that after 1973, productivity grew strongly, especially after 1995, while the typical worker’s compensation was relatively stagnant. 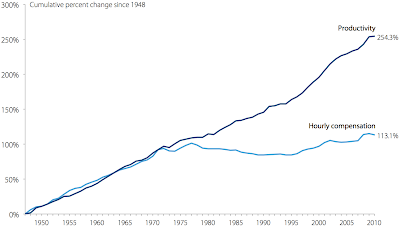 The next graphic disaggregates the productivity-pay disparity from 1973 to 2011 by charting the accumulated growth since 1973 in productivity; real average hourly compensation; and real median hourly compensation of all workers, and of men and of women. This figure clearly shows the divergence, especially since the early nineties between productivity and different categories of compensation. In simple terms, the share of income received as wages by workers is disproportionately small when compared to the share received by the owners of capital. 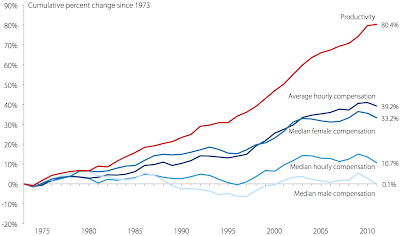 In addition, he also finds that workers suffered from adverse terms of trade. In other words, the prices of things they buy (i.e., consumer goods and services) have risen much faster than that of what they produce (consumer goods but also capital goods).

I will leave Mishel to conclude,


Productivity in the economy grew by 80.4 percent between 1973 and 2011 but the growth of real hourly compensation of the median worker grew by far less, just 10.7 percent, and nearly all of that growth occurred in a short window in the late 1990s. The pattern was very different from 1948 to 1973, when the hourly compensation of a typical worker grew in tandem with productivity. Reestablishing the link between productivity and pay of the typical worker is an essential component of any effort to provide shared prosperity and, in fact, may be necessary for obtaining robust growth without relying on asset bubbles and increased household debt.

Much the same forces are active across the world, including countries like India. The only difference is in its magnitude or severity.
Posted by Urbanomics at 7:41 AM