The graphic below which highlights the sources of public debt in Europe since 2007 for Germany, Italy, France, and the UK offers several insights. 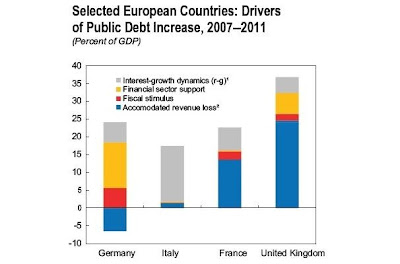 1. Stagnant or declining economy is understandably a large source of growth in the debt-to-GDP burden. As I have blogged earlier, this is true of America's current deficit. The graphic shows the same of France, and in particular UK. UK, which has had the largest austerity drive, has also had the largest increase in debt-to-GDP ratio. Conversely Germany's robust growth has kept its deficit from being higher than it would have been without.

2. As the debt burden crosses the unsustainable mark, two effects are likely to kick in. One, the absolute value of debt repayment increases. Two, the cost (interest rate) of debt service (rescheduling and raising new debt) rises and this feeds into the first. Italy, with its 120% of GDP debt stock and bond yields which touched 7%, is clearly the example of this.

3. As Matt Yglesias writes, the graphic also shows that Italy's major problem is a liquidity crisis which threatens to drive the country insolvent. It even has a primary surplus and its debt problems are a direct result of exploding debt service costs. The graphic also highlights how all the other standard factors driving up debt are absent. With the ECB refusing to act as a lender of last resort, Italy is facing a "national-level bank run"!

4. As Brad Plumer writes, Germany has had the largest fiscal stimulus and spend the most bailing out banks. The result has been financial stability and growth, though both are now threatened by a pan-European contagion from the PIIGS.
Posted by Urbanomics at 6:04 AM