1. Budget at a glance - how money comes and where it is spent? 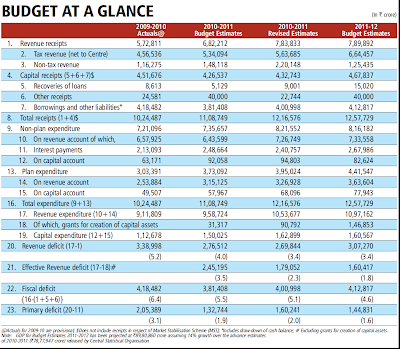 2. Expenditure control is one of the highlights of the budget, especially with decreases in all major subsidy categories. Further, the budgeted net borrowing of Rs3.4 trillion for this fiscal is Rs 40,000 crore less than market expectations. However, it remains to be seen whether the targets will be met. 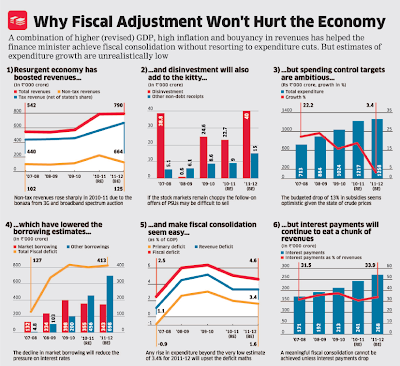 3. The landmark decision of the budget was arguably the one to replace fertiliser, fuel and LPG subsidies with direct cash transfers from March 2012. Interestingly, the size of the subsidy bill, including for food, for the year 2011-12 has been reduced by 12.5% from the current year’s revised estimates to Rs 1.4 lakh crore. 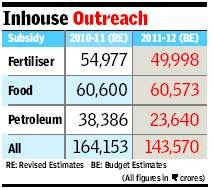 4. On infrastructure, the FII limit for investment in corporate bonds, with residual maturity of over five years issued by companies in the infrastructure sector, was increased four-fold from the current $5 bn to $25 bn, albeit with a minimum lock-in period of five years. This is not likely to have any immediate impact as only half-a-billion dollar out of the existing limit of $5 billion has so far been utilised. The allocation for infrastructure sector was increased by 23.2% to Rs 2,14,000 Cr, which is about 48.5% of the gross budgetary support to plan expenditure. To attract foreign funds for financing of infrastructure, special vehicles can henceforth be created in the form of infrastructure debt funds; interest payments on the borrowings of these funds will be taxed at 5% instead of the current 20%; and the income of the fund will be exempt from tax.

Since infrastructure companies are usually organized as SPVs, FIIs would also be permitted to invest in unlisted bonds with a minimum lock-in period of three years and will also be allowed to trade amongst themselves even during the lock-in period.

5. Overall social sector spending goes up 17%. Education and healthcare will get 24% and 20% more respectively. However, NREGA spending, a large part of whose allocation was unspent this fiscal, has remained same.

6. To address the critical issue of supply-side constraints in agriculture, there were a number of initiatives. The interest subvention subsidy on farm loans repaid on time was increased from 2% to 3%. The target for agriculture sector credit has been raised by Rs 1 lakh crore to Rs 4.75 lakh Cr. Further, allocation under the Rashtriya Krishi Vikas Yojana(RKVY), which incentivises states to invest in the farm sector, was raised to Rs 7,860 crore from Rs 6,755 crore in the current fiscal. Another Rs 2200 Cr was earmarked to improve productivity and boost production of vegetables, pulses, oilseeds, millet and fodder.

It was also decided to grant 'infrastructure sector' status to cold storage facilities and exempt cold chain equipment from excise duties. Further, capital investment in the creation of modern storage capacity would be eligible for a viability gap funding scheme from the Finance ministry.

It was also announced that 2 mt of storage capacity would be created in the coming fiscal under the Public Entrepreneurs Guarantee (PEG) Scheme. It is estimated that there is a shortage of agriculture storage capacity of 32 mt, which would require investments in excess of Rs 10000 Cr.

7. Tax to GDP ratios are rising again, though much remains to be done. 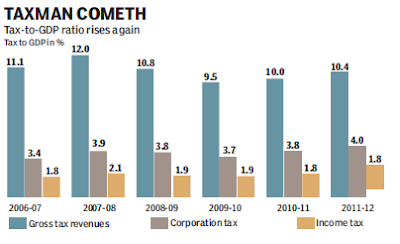 8. Corporate tax surcharge on domestic companies has been cut from 7.5% to 5%. The rate of Minimum Alternate Tax (MAT), levied on developers of Special Economic Zones as well as units operating in SEZs, has been raised from 18% of book profits to 18.5%. For the year 2011-12, dividends received by an Indian company from its foreign subsidiary will be taxed at a lower rate of 15%, to provide these funds an incentive to flow to India. 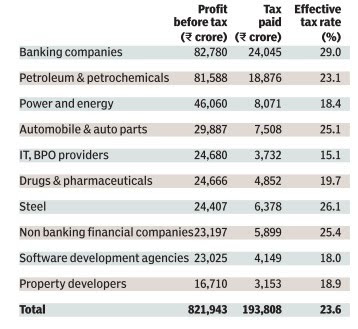 10. The aforementioned graphic highlights the critical role of exemptions or "subsidy to preferred tax payers". In 2010-11, the central government lost potential tax revenue worth a staggering Rs.5.7 lakh crore due to the various exemptions, concessions and rebates it gave. These concessions, which form about 80% of the total tax expected to be collected in the period, are given to corporate and personal income tax payers, and excise and customs duty payers. After deducting export credit related concessions, the revenue foregone amounts to Rs 5.1 lakh crore.

Excise and customs duty rebates form about 39% and 34% respectively of the total revenue foregone, while personal income tax formed just 10% and corporate tax 17%. However, such revenues foregone has been increasing over the years, more than doubling from about Rs 2.4 lakh crore in 2006-07 to the present Rs 5.6 lakh crore. with the proportion increasing from 50% to 80% of total tax collections. The effective tax rate on the 4.27 lakh corporate returns filed by end of December 2010 was 23.53% as against the statutory tax rate of 33.99%. 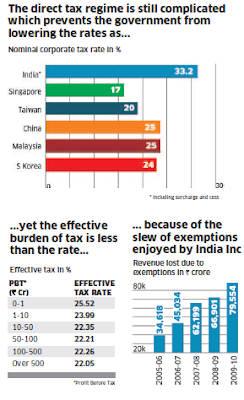 Posted by Urbanomics at 7:54 AM

Wondering if anybody knows how the 3G license fee collections of about Rs.1.2 lac crores is being spent by the government. Ideally the sum could be invested in building/subsidising telecom infrastructure and paying back the mobile end-user community. The sum is probably sufficient to expand broadband optical fiber network covering even the most remote parts of the country.

Naturally the GOI retains the right to decide on the deployment of resources. A strict compartmentalization might not be possible all the time.