The myth of Japan's "lost decade"?

Daniel Gros provides an interesting twist to the conventional wisdom that Japan suffered a "lost decade" in the first decade of the millennium, posting annualized real GDP growth of just 0.6% (to US's 1.7%) - demography!

He argues that instead of blindly comparing the overall GDP growth rates, a more meaningful standard for comparison will be the growth of income per head of the working-age population (WAP)(which represents an economy’s productive potential). And a comparison reveals,

"When one looks at GDP/WAP (defined as population aged 20-60), one gets a surprising result: Japan has actually done better than the US or most European countries over the last decade. The reason is simple: Japan’s overall growth rates have been quite low, but growth was achieved despite a rapidly shrinking working-age population.

The difference between Japan and the US is instructive here: in terms of overall GDP growth, it was about one percentage point, but larger in terms of the annual WAP growth rates – more than 1.5 percentage points, given that the US working-age population grew by 0.8%, whereas Japan’s has been shrinking at about the same rate.

Another indication that Japan has fully used its potential is that the unemployment rate has been constant over the last decade. By contrast, the US unemployment rate has almost doubled, now approaching 10%. One might thus conclude that the US should take Japan as an example not of stagnation, but of how to squeeze maximum growth from limited potential."

Assuming the working population as the measure of the country's productive capacity, it can be safely concluded that Japan has been successful in squeezing out the most from its shrinking working population. Since its working age population will continue to shrink by about 1% per year, Japan's continued relative decline is to be expected. Germany and Italy too are likely to follow in Japan's footsteps. Prof Gros attributes the current strength of the German economy partly due to the temporary demographic stabilization in the 2005-15 period. 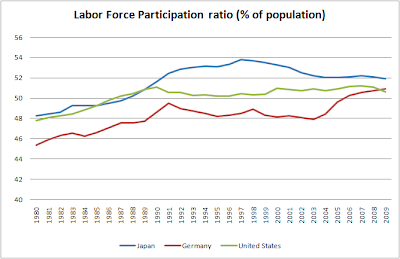 In many respects, Japan's current problems can be a reliable precursor for many of the other developed economies, including the US. The stand-out performance of the US economy over the past two decades, in comparison to the weakness in Japan and Europe, conceals the demographic advantage enjoyed by the US. In this context, Prof Gros raises concerns about the long-term growth prospects of developed economies, given their unfavorable demographic trends

"Slow growth in Japan over the last decade was due not to insufficiently aggressive macroeconomic policies, but to an unfavorable demographic trend. Second, a further slowdown in rich countries’ growth rates appears inevitable, given that even in the more dynamic countries the growth rates of the working-age population is declining. In the less dynamic ones, like Japan, Germany, and Italy, near-stagnation seems inevitable."

Posted by Urbanomics at 5:39 AM