Paul Krugman's column about the need for a strong fiscal authority that can make fiscal transfers to assist Euro members successfully confront macroeconomic challenges has raised an interesting debate about what constitutes an optimal currency area (OCA).

Greg Mankiw posted that an OCA required not just a strong fiscal authority, but also a different set of labor institutions, one that facilitates faster adjustment of wages. More specifically, he calls for labor mobility across borders and wage flexibility.

David Beckworth makes several highly relevant points and advocates that "members of a currency union should either share similar business cycles or have in place some combination of economic shock absorbers including flexible wages and prices, factor mobility, fiscal transfers, and diversified economies". In a reflection of EMU's problems, a common monetary policy for the entire currency union is fine so long as all members are at similar points business cycles, but would be destabilizing (either too stimulative or too tight) if members have dissimilar business cycles. In the later case, fiscal transfers are neccessary to mitigate the resultant macroeconomic problems. He represents the OCA area requirements in this simple graphic 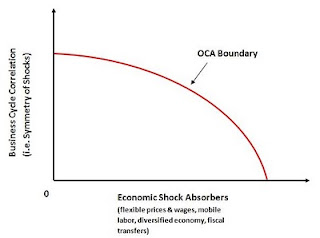 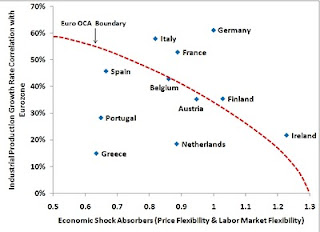 In other words, business cycles have differing impacts across the euro area, which lacks the necessary fiscal institutions to cushion the blow in places hit relatively hard. David Beckworth writes that Greece lies inside the OCA boundary, "there is not enough of either business cycle similarity or shock absorbers in Greece to justify the cost of its membership in the Eurozone". He also suggests that the US economy itself, with its North-South labor mobility restrictions till after the War, did not become acquire characteristics of an OCA until the 1930s.

Indeed, taking the example of Michigan and Texas, he even argues that all of the US is still not an OCA. He writes that it is facile to claim that both, with inadequate amount of economic shock absorbers, benefited from the same monetary policy,

"Given the vast differences between these two states in their business cycles, diversification of industry, union influence, and wage stickiness it easy to wonder whether these states should belong to the same currency union. Yes, they have access to fiscal transfers, labor mobility is great, culturally they are similar, and politically there is will for the dollar union. Still, given the disparate impact of US monetary policy on different regions of the country one does wonder whether all the United States is truly an OCA."

I find this arguement about Euroland not being an OCA and the consequent pointer towards an exit (by Greece) from Euro area a case of post-facto rationalization with a bit of circular logic. Instead of questioning the Euro Project itself on the grounds that Euroland does not have the pre-requisites of an OCA, opinion makers should be trying to suggest measures (like what David Beckworth suggests) that can make Euroland a successful OCA.

Whatever the end result of the ongoing crisis, I cannot but argue that the benefits of a single currency, by way of lowering of business transaction costs and tariff barriers, and the consequent increase in trade, are too large to be overlooked. If there was a failure, it was clearly that of the architect policy makers, who failed to understand the true implications of a monetary union and have in place institutional mechanisms that can address economic failures arising out of the political deficiencies of the European integration project. And as a silver lining, maybe the current crisis is a godsend for integrationists to push through some of the institutional reforms required to increase the political integration dimension to the EMU.

In fact, a logical extension of the arguement applied to Indian context, would lead to the conclusion that since at any time many Indian states would be out of sync with the national business cycle (which determines the monetary policy), India does not correspond to an OCA. For examples, the wide variations in unskilled labor wage rates between states like Kerala and Bihar or even Andhra Pradesh, and the considerable systemic and cultural restrictions against their free mobility, goes against the requirements of an OCA. Does that mean India is not ready to be an OCA and therefore states should have their own currencies? By the same yardstick, are there are any really optimal OCA's? I am inclined to the view that construction of an OCA is in large measure about effective fiscal federalism.

See also this analysis of the Euromess by Krugman, with the illustrative case of Spain, about the importance of fiscal and labor market integration before a currency union. Ryan Avent points to the fact that, unlike the American states, cultural differences may be a large enough deterrent from achieving the desired level of labor mobility among Euroland members. See Amol Agarwal's summary of the debate here.
Posted by Urbanomics at 6:05 AM