The Government of India is concerned with the increasing market share of Chinese equipment makers in the new Indian power projects. It may even be contemplating taking anti-dumping action or invoking safeguards clause of the WTO to restrict these imports which now form a quarter of the power equipment market, especially among the upcoming private projects. However, such concerns fuelled by national security fears and a threat to BHEL's market position in India, may be more a case of fighting shadows. 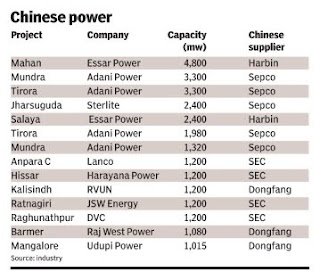 In the last couple of years, the Chinese state power equipment makers - Harbin, SEC, Dongfang, Sepco etc - have captured nearly a quarter of the market share, especially among the independent power producers (IPPs). Thanks to favorable Chinese government policies like standardization of equipment sizes and bulk procurements, these state owned firms have emerged as the largest and lowest cost manufacturers of BTG equipments required for thermal power generating plants across the world, ahead of even established global players like Alstom, Siemens, and Hitachi.

1. The Chinese equipments are good for Indian power generators and for consumers. They are 10-15% cheaper than equipments sourced from elsewhere, including BHEL, and have therefore lowered the cost of capacity addition from about Rs 4.5 Cr per MW to Rs 3.5 Cr. The generators would have to pass on the resultant benefits to the consumers by way of lower tariffs.

2. The concerns about BHEL may be a classic case of an incumbent wanting to protect its turf. As any one with knowledge of Indian power sector would acknowledge, the BHEL is struggling to meet its commitments on already available delivery schedules. Its order books are overflowing and in the absence of substantial capacity addition on making these equipments, its inability to meet its commitments would adversely affect the capacity addition program in Indian power sector. And the state owned utilities who have a larger exposure to BHEL will be the biggest sufferers. In the circumstances, the Chinese imports may actually end up expediting the capacity addition program.

3. The surge in Chinese imports provide an excellent opportunity for policy makers to promote an industrial policy that encourages these equipment suppliers to provide upfront commitment for progressive indigenisation of technology or a phased manufacturing programme (PMP). This would not only reduce costs even further, but also facilitate the development of a vibrant heavy and capital equipment industry in the country.

4. Finally, to the extent that the Chinese equipments are cheaper due to the numerous implicit subsidies (like cheaper capital, tax concessions etc), the imports are a form of Chinese subsidization of Indian power generation program! And we would be extremely foolish to reject this.

Instead of fighting shadows, we should be leveraging the buyer's power to fortify ourselves, something the Chinese have perfected in many industries, most notably the aircraft industry during their massive fleet expansion programs. This would require not only strategic use of industrial policy to encourage local manufacturing and technology transfer, but also addressing concerns about the post-delivery servicing and visa regulations for Chinese engineers working in the commissioning of these projects. We should also use the opportunity to get the Chinese to immediately resolve all lingering concerns about the suitability of Chinese equipments to the high-ash content Indian coal, besides sharing all required information about equipment standards and designs and permitting more intensive inspections of the manufacturing facilities by the Central Electricity Authority (CEA) as mandated by the Electricity Act 2003.

Further, taking a leaf out of China's own diplomatic handbook (in its dealings with the US), we could selectively use such leverage as part of our foreign policy to wring out concessions from the Chinese.

Update 1
An estimated 21,519 MW of generation capacity during the Eleventh Plan period is being implemented during using Chinese equipment while orders for another 14,000 MW have been placed for projects coming up in the Twelfth Plan (April 2012-March 2017).

Businessline reports that Chinese companies - Dongfang Electric Corporation, Shanghai Electric, Sichuan Machinery and Equipment and Shandong Electric Power Construction Corporation - have edged out state-owned Bharat Heavy Electricals Ltd (BHEL) as the top equipment suppliers to thermal power projects slated to come up in the next five years. According to the latest equipment ordering status for the 79,000 MW of fresh capacity slated to come up in the Twelfth Plan (2012-17), Chinese vendors have bagged contracts for supplying electro mechanical equipment adding up to 28,740 MW. This is against the 27,746 MW to come from BHEL during the five-year period. Of the Twelfth Plan orders booked by Chinese firms, 96% or 27,540 MW, are from private project developers.

For the Twelfth Plan, apart from BHEL, domestic manufacturers, including the L&T-Mitsubishi Heavy Electric combine, Bharat Forge-Alstom and Toshiba-JSW have cumulatively clocked orders worth 10,182 MW. Foreign suppliers other than the Chinese, including Korean firm Doosan and Russian firm Power Machines, have got orders for over 7,000 MW. However, central sector firms, led by NTPC Ltd and Neyveli Lignite Corporation, are yet to place a single order on Chinese equipment suppliers.

The Finance Ministry favours the imposition of 5 per cent basic Customs duty, 4 per cent additional import duty and 10 per cent countervailing duty (imposed in lieu of excise duty for domestic producer) making a total of 19 per cent on all power generation equipment for projects above 1,000 MW. Businessline reports that the Cabinet Committee on Economic Affairs (CCEA) is expected to take a call on the issue in the next 15 days.
Posted by Urbanomics at 7:04 AM

Rather nice place you've got here. Thanx for it. I like such topics and anything that is connected to them. BTW, why don't you change design :).