David Beckworth has two graphs that depicts the nominal spending changes in the US economy and among OECD economies for the half century since 1960, which are strikingly similar, especially in the great crash in nominal spending since the later half of 2008. 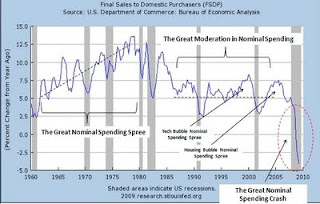 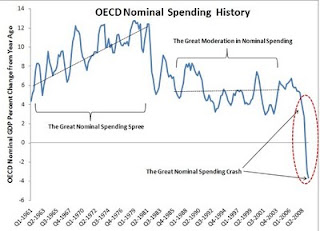 The immediate conclusion drawn from this is the apparent insufficiency of monetary expansion in recent times. Marginal Revolution feels that some inflation could give nominal spending a boost. Paul Krugman, though differs and uses the money supply-velocity equation (MV=PY) to argue that focussing on nominal spending when faced with a liquidity trap monetary policy has no traction. The equation itself tells us that "any changes in the money supply are offset one for one by changes in velocity". Further, in the real world, where Central Banks control only the monetary base (and not the money supply), money supply becomes constrained in any case when facing the liquidity trap.

See also Beckworth's response to Krugman here, where he argues that changing expectations of future inflation can make monetary policy effective and this in turn can be achieved with the Fed annoucing an explicit inflation target. Free Exchange's response is here.

The fundamental issue here is whether monetary policy will have any more steam in stimulating demand given the present circumstances. Supporters say that "if you put enough money in the hands of American consumers, then eventually they'll begin spending it" and there are many ways to do this. Opponents like Krugman say that, all this is fine under ordinary cirumstances, but when faced with the zero-bound liquidity trap, people will just save or pay-off debts and not spend the money put into their pockets. In any case, when economists and historians discuss the Great Recession in later years, this will surely be one of the most contentious issues of debate.
Posted by Urbanomics at 5:51 AM