Taylor Rule, formulated by Stanford economist John Taylor in 1993, stipulates how much the central bank should change the nominal interest rate (say, federal funds rate in US) in response to divergences of actual GDP (or employment level) from potential GDP and of actual inflation rates from a target inflation rates.

It provides a guide for Central Banks to "set short-term interest rates as economic conditions change to achieve both its short-run goal for stabilizing the economy and its long-run goal for inflation". It identifies three determining factors for the "real" short term interest rate
1. where actual inflation is relative to the targeted level that the Fed wishes to achieve
2. how far economic activity is above or below its "full employment" level
3. what the level of the short-term interest rate is that would be consistent with full employment (Taylor assumed this to be 2% for the US economy).

Part of the reason for Greenspan's apparent success, atleast till the sub-prime crisis blew the cover, with monetary policy was the close adherence to Taylor Rule.

Fed Governor Ben Bernanke has this to say, "when output is above its potential or inflation is above the target, the Taylor rule implies that the federal funds rate should be set above its average level, which (all else being equal) should slow the economy and bring output or inflation back toward the desired range."

More discussion on Taylor Rule is available here, here, here, and here. Econbrowser has a discussion on Prof Taylor's simple model to try to predict housing starts on the basis of past values of interest rates.

Paul Krugman points to a Goldman Sachs estimates of the potential output, whose comparison with the Taylor Rule, would appear to predict that the Fed would have to cut rates to minus 6% by 2010, a clear indicator of deflation and a liquidity trap. 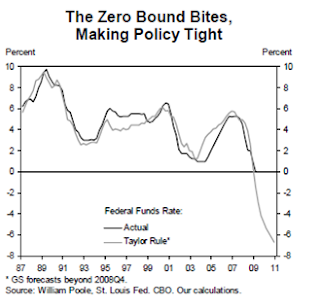 Dear Gulzar,
Can you please contact me on my email id, ajith.unni@yahoo.com? I need the data which you have used to compile the graph, primarily of historical inflation and calculated Taylor Rule. Or, just the Taylor rule values from Jan 1995. Much appreciated!