A case against lowering direct taxes in India

It has become some sort of a scared cow that any "successful" budget contain atleast a few proposals for cutting direct taxes. Newspapers and other opinion makers have distilled this wisdom deep into the minds of their audience. Tax cuts have therefore become the touchstone for populism and public acceptance of any budget! Are taxes so high and are we one of the highest tax paying nations? It is therefore instructive to go beyond the surface and examine this sacrosanct claim.

The tax revenues grew at 20.5% in 2007-08, and an average of 22% for the last five years or doubling every three years. This buoyancy has boosted the tax-GDP ratio to an all time high of 12.5. Contrast this with when economic liberalisation was initiated 16 years ago - the share of direct and indirect taxes in gross tax revenue were 22.5 per cent and 73 per cent respectively, to an almost even share today.

Well respected commentators and analysts indulge in sophistry and invoke this buoyancy to call for lowering the direct tax rates. They claim that the taxes have increased at a massive rate and it is therefore only appropriate that we pass on some concessions to the tax payers, or reward them for their taxes. A closer look at our tax figures and comparison with other countries, reveal an interesting story. Consider the following sets of statistics.

3. In the UK, a single filer with a taxable income exceeding £34,600 will pay 40% tax at the margin. In the US, the highest rate is 35%. In Australia, 30% kicks in very early, and the highest marginal rate is 45%. In contrast, India's marginal tax rate was only 30%. Even with the surcharge of 10%, plus an education cess of 3%, our marginal rates are lower than that of the aforementioned countries. And we were taught that developed countries have lower tax rates than developing ones!

5. The Finance Minister resisted vociferous calls for lowering corporate taxes, already one of the lowest in the world. Taking advantage of various exemptions and rebates, the corporate sector paid taxes at the rate of 20.60%, substantially lower than the statutory tax rate of 33.66%.

6. Interestingly, public sector companies paid taxes at the rate of about 23% while private sector paid at the rate of about 20%. These companies earned Rs 5,56,190 crore as profits before taxes, but declared taxable income of Rs 3,41,606 crore only, or only 60% of their profits, during the financial year 2006-07, thereby getting total tax concessions worth Rs 58,655 crore, an increase of 30% over the previous year.

7. IT companies and ITes and BPO firms pay some of the lowest tax rates anywhere in the world, at 6% and 7% respectively.

It is estimated that the government lost Rs 2,78,644 crore of potential revenue during 2007-08 on account of various exemptions, rebates and concessions provided to individual and corporate tax payers. To put this in perspective, we have these sets of figures
a) This is 3.26 times the capital expenditure of Rs 85,256 Cr of the Central Government.
b) This is 42% of the total Central Government expenditure of Rs 6,73,842 Cr in 2007-08.
c) The total GoI expenditures on education and health care were Rs 24,249 Cr and Rs 11,757 Cr respectively.

Such rebates are effective subsidies to specific categories of tax payers. This marks an increase of over 16% over similar revenues foregone in the previous financial year. The revenue foregone is about 48% of total tax collections. Including Rs 58,416 Cr worth export related subsidies and exemptions, the revenue foregone reached a whopping Rs 3,37,060 crore, or about 58% of actual tax collections. Further, exemptions to individual tax payers, like those provided under Section 80C, will result in tax concessions worth Rs 38107 Cr in 2007-08, an increase of over 30% over last year. But the cry for concessions continues.

All this raises important questions about our fiscal policies. Is our tax buoyancy due to the increased honesty of our tax payers, that we need to reward them? Is the tax collection volume high enough to justify easing off? Why and when do we change our tax rates? What is the objective of our tax policy? Is it that our policy goal is to ultimately do away with all direct taxes?

It has been clearly established that our tax volumes have surged in the main due to the robust near double digit economic growth experienced this decade, and also due to the more stricter enforcement of tax regulations. It was inevitable that given the massive tax evasion, as the economy progressed and we deployed more technology to regulate our tax system, the revenues increased.

Our investment needs are staggering, and the resources scarce. It has become a fashion to claim that the private sector and PPP can be a panacea for our infrastructure deficits. No country in history has developed its basic infrastructure through a private sector dominated strategy. Different countries have tried this strategy at various times in their development trajectories, but had been disappointed. We only need to look at our giant Northern neighbour to realize the importance of public investments.

We sorely lack basic civic infrastructure in both the rural and urban areas. Drinking water, sewerage and sanitation facilities, internal roads and drains, public transport, reliable electricity supply, quality health care and education logistics loom large on the deficit side of this balance sheet. No PPP or private sector can replace government investments in such sectors, even in our cities. There exists considerable potential for private investments in core infrastructure like power, telecommunications, highway roads, ports, airports, etc. But here too Government will continue to be the overwhelmingly dominant investor, both in the less remunerative rural areas and in viability gap funding in other areas.

The Planning Commission has estimated that we need to invest $500 bn over the next five years in infrastructure alone. To put this in perspective, this is almost half our GDP. Our total tax collections in 2007-08 was only $145 bn, of which 60% went into transfers, interest payments etc, leaving the Government with only about $60-70 bn.

The Central Government spending in education, health care, rural development, and Agriculture, as projected in the 2008-09 budget were respectively a mere Rs 38703 Cr ($9 bn), Rs 17591 Cr ($4bn), and Rs 23831 Cr ($5.5 bn), Rs 9660 Cr ($2.4 bn). The entire allocation for the social sector was a mere Rs 95919 Cr ($44 bn) or 25% of the total budget outlay. Now, these are hardly the magintude of allocations that a country where 70-80% people depend on government for most basic services. It is clear from the meagre amounts we are able to allocate for critical social sector investments, that our tax collections continue to be too small to meet our massive demands.

All our major, capital intensive transport projects like highways, ports, airports etc benefit the rich and well-off more than the poor. The massive investments in urban and other civic infrastructure benefits the rich disproportionately more than the poor. In any case, it is well acknowledged that the poor gain access to many of these services very late, and often never.

On closer introspection, contrary to widely held perception that the rich people end up paying taxes for the welfare of the poor, it is the rich who actually benefit from the expenditures made out of their taxes. After all, who benefits from the massive investments being made in capital intensive sectors like express highways, ports, airports, telecommunications facilities, urban infrastructure, power etc. In contrast, the majority of the population residing in villages, have no or limited utility with all these magnificient wonders of modern India. Also, the rich and middle class are atleast equal beneficiaries of even many of the agriculture subsidies, as they help keep foodgrain prices low for its major consumers.

David Leonhardt writes that in all of 2009, tax exemptions, deductions, credits and other loopholes (collectively, tax expenditures) cost the federal government $1.05 trillion - the sum total of all personal income taxes paid was only $915 billion! 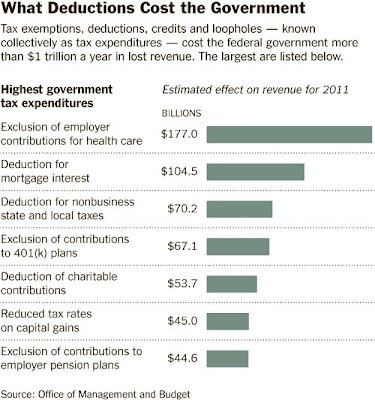 ''Now we have one of the highest IT floor rates, exceeding even the US, where people start paying taxes at a lower income level of $3400 (Rs 1.36 lakhs)''

Could you give me a reference for this figure? It seems too low to me.

b) The case for massive public investment is fine. But isn't the problem that the government delivery system has broken down? People have a problem paying taxes because they see little return on their investment. Look at NREGA--A 9 billion$ plan--who is it benefiting?

a) Times of India, the day-after budget edition.
b) your arguement/contention is cyclical. You agree that public investments are necessary and that government delivery systems have broken down. So isn't the need one of revitalizing (and there are numerous examples of such successful reforms) these delivery systems and identifying complementarities with private (PPP) and non-government sector for delivering these investments and services?

The debate should not be about whether to collect taxes or not, but to spend the collected taxes more efficiently.