At heart, this movement is a democratic revolt against expertise. Citizens in the west have surrendered a great deal of their decision-making power to experts — central bankers, writers of search-engine algorithms, epidemiologists. Mr Trump speaks for those who want this power back. He doubts the motives of experts. He even doubts they are experts in the first place. He thinks they’re operators, not serving the country so much as exploiting it.

Whatever happens going forward, it cannot be denied that Trump has decisively reshaped American politics. Populist anger is going to be a central force; the relations with China has been irretrievably changed; revival of American manufacturing has become a priority. It's hard to believe that these shifts could have happened in such decisive manner without Trump.

In stark contrast, when one thinks about President Obama, one takes away with the feeling that he just keep the show going for the elites.

2. This (HT: Ananth) is stunning. Two priceless graphics in Bloomberg indicating the top 100 each of employers and occupation categories which were the biggest donors to Biden and Trump.

Of the employers included in this analysis, those whose employees tilted the most to Trump were the New York Police Department and the U.S. Marines, with almost 70% of employees who made contributions to one of the two presidential campaigns favoring the incumbent. The employers with the greatest share of Biden donors were Facebook and the University of Washington, with over 97% of their donors giving to Biden... Trump generally fared better with manual laborers, with 84% of donors who reported being ranchers and 75% of construction workers giving to him. The vast majority of donors who work as college professors, deans or who were otherwise employed by colleges or universities gave to Biden.

The divide is cognitively striking. The knowledge-based companies and more educated occupational categories were overwhelmingly pro-Biden.

3. Another one in the long line of Japanese monetary policy experiments,

Using the government’s relief program for small and midsize companies hit by the coronavirus pandemic, banks have extended the equivalent of more than $250 billion in loans in less than six months, according to the Small and Medium Enterprise Agency... Relative to the size of its economy, Japan’s program is bigger than the main U.S. pandemic-aid program for small business, the Paycheck Protection Program, which delivered more than five million loans totaling $525 billion. And Japan is still pumping out the money. The PPP ended in August.

4. Talking of US Paycheck Protection Program(PPP), WSJ reports of massive fraud with the program,

Evidence is growing that many others took advantage of the program’s open-door design. Banks and the government allowed companies to self-certify that they needed the funds, with little vetting. The Small Business Administration’s inspector general, an arm of the agency that administers the PPP, said last month there were “strong indicators of widespread potential abuse and fraud in the PPP.” The watchdog counted tens of thousands of companies that received PPP loans for which they appear to have been ineligible, such as corporations created after the pandemic began, businesses that exceeded workforce size limits (generally 500 employees or fewer) or those listed in a federal “Do Not Pay” database because they already owe money to taxpayers. Tens of thousands of organizations also appear to have received more money than they should have based on their headcounts and compensation rates, it said... One type of suspicious activity banks reported were multiple government payments from coronavirus-relief programs to a single account, suggesting potential abuse... Several hundred PPP-related investigations have been opened, involving nearly 500 suspects and hundreds of millions of dollars of loans, according to the Federal Bureau of Investigation.

5. The government of India is considering a policy on scrapping of vehicles after 15 years, which includes some public subsidy. Under the policy, the vehicles registration ceases after 15 years and there is a very steep fee for re-registration. I have no informed views on this. But it does suggest a bit intuitively odd that the life of a vehicle is only 15 years.

What's the basis for the 15 year limit? Is the median shelf-life of a vehicle in the Indian context only 15 years? Is this yet another case of India adopting western aspirational standards for scrapping? If yes, does this not lead to net welfare and economic value destruction?

6. The first round of auctions to allocate coal blocks for commercial mining to private firms after the deregulation of the coal mining sector has been successfully completed. The auctions have generated competitive interest, with 19 mines and 42 bidders for 51 mt annually. The auctions were awarded on revenue share basis, with the bid amount to be counted as variable cost passed-through to consumers. 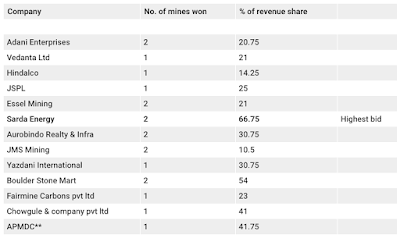 The good news is about the competitive nature of the auctions, also indicated by the fact that Adanis have won just 2 out of the 19 blocks. Just four of the twenty appear excessive. This can be termed as a good example of learning from previous experience (of the 2015 washout auctions) and conducting realistic auctions. The Ghost of Vinod Rai appears finally exorcised from Coal Ministry.

7. Economists tend to discount the equilibrium impact of disruptive technologies arguing that it creates a new category of jobs to employ those displaced. A new study on the impact of automation of telephone switching in the US from the 1920s finds,

Telephone operation, one of the most common jobs for young American women in the early 1900s, provided hundreds of thousands of female workers a pathway into the labor force. Between 1920 and 1940, AT&T adopted mechanical switching technology in more than half of the U.S. telephone network, replacing manual operation. We show that although automation eliminated most of these jobs, it did not affect future cohorts' overall employment: the decline in demand for operators was counteracted by growth in both middle-skill jobs like secretarial work and lower-skill service jobs, which absorbed future generations. Using a new genealogy-based census linking method, we show that incumbent telephone operators were most impacted by automation, and a decade later were more likely to be in lower-paying occupations or have left the labor force entirely.

The last part is important. The losers of any such disruption are real and attending to them should be an important policy consideration.

8. The government of India's active promotion of UPI and RuPay cards (coupled with other things like the 30% limit of digital transactions for any one provider) through the NPCI are good examples of public policy to break up entrenched competition and create a more sustainable market.

10. Krishna Kant in Business Standard analyses that listed PSUs have paid out Rs 2.75 trillion in revenues in the last five years, despite falling profitability.

In the past five years, the 55 listed PSUs cumulatively paid equity dividend worth Rs 2.75 trillion, against their cumulative net profit of Rs 3.85 trillion, which translates to a record pay-out of 71.5 per cent. This was more than twice the pay-out ratio of Nifty50 firms, which was 32 per cent. The amount the PSUs paid was separate from the sums they paid the government for share buy-backs. Between FY17 and FY20, PSUs cumulatively spent around Rs 41,000 crore on share buy-backs. This takes the total dividend pay-out ratio to around 82 per cent on average in the past five years. The bulk of the dividend was paid-out by commodity producers and industrial companies such as ONGC, Coal India, NTPC, Power Grid, Bharat Heavy Electrical, Indian Oil and Bharat Petroleum Corporation (BPCL) among others. These non-financial PSUs paid nearly Rs 42,000 crore combined as equity dividend accounting for 89 per cent of dividend pay-out by all listed government-owned companies.

11. Business Standard reports of a proposal by central government to designate manufacturing hubs and allow private operators to supply electricity to industrial consumers. Difficult to understand what's new here nor how this can help.

If one thinks through even the first round of end-to-end effects, one will realise that there are no technical or top-down fix to this disentangling this knot. The wires will be owned by discoms, the distribution will be managed by the discom, and the regulation will be by the state government, and so on. There is only so much that can be forced down. That, perhaps, may be the saving grace!

12. Pratik Datta has a very good article on the issue of judicial action on RBI decisions. He invokes the work of Lon Luvois Fuller to argue in favour of a polycentricity test to determine judicial intervention,

Fuller’s central thesis was that adversarial adjudication is not suitable for resolving “polycentric” problems. He compared polycentricity with a spider’s web — a pull on one strand distributes the tension throughout the web in a complicated pattern. Applied to adjudication, polycentric problems normally involve many affected parties and a somewhat fluid state of affairs. The range of those affected by the dispute cannot easily be foreseen and their participation in the decision-making process by reasoned arguments and proofs cannot possibly be organised. As a result, the adjudicator is inadequately informed and cannot determine the complex repercussions of a proposed solution. Fuller argued that attempts to resolve polycentric problems through adjudication would lead to inferior outcomes. Either the solution would fail, or the adjudicator would be forced to ignore judicial proprieties to try out various solutions. Worse, the adjudicator may reformulate the problem itself to make it amenable to adjudicative disposition... Fuller did, however, recognise that all disputes submitted to adjudication have some elements of polycentricity... He, therefore, concluded that ultimately it is a question of knowing when the polycentric elements have become so significant and predominant that the proper limits of adjudication have been reached.
Disputes involving certain central bank functions are highly polycentric and are unsuitable for resolution through judicial review. For example, consider monetary policy function. This involves varying short-term interest rate to control supply and demand of money in the economy, which, in turn, influences economic activity and inflation. If judicial review supplants the central bank’s decision on this rate with the decision of the adjudicator, the repercussions would affect every single borrower and saver. Yet, the adjudicator can neither offer a meaningful hearing to all those affected parties, nor can he effectively process all the necessary information to determine an optimal solution. Evidently, disputes about monetary policy rate are highly polycentric and are better resolved outside the court... judicial review could be effectively used to resolve bipolar disputes involving the central bank if they exhibit low polycentricity... Overall, the polycentricity test offers a conceptual framework for determining if a commercial dispute brought before the court involves a question of public policy that should ideally be kept beyond the remit of substantive judicial review. Adopting this test within constitutional jurisprudence would help sustain the legitimacy of judicial review while retaining the accountability of technocratic institutions such as the central bank.

13. The Government of India appears to have seized on production-linked incentives (PLIs) as a magic-pill to overcome antecedent problems and attract investment and manufacturing to India. Mobile phones happened. Does not at all mean that anything close to similar impact with other sectors using PLIs is assured.

Posted by Urbanomics at 6:16 AM