1. WSJ has an article which questions the widespread belief that failures help make a better entrepreneur.

2. An RCT evaluation shows that microfinance can indeed help certain types of entrepreneurs,

In Hyderabad, India, we find that “gung ho entrepreneurs” (GEs), households who were already running a business before microfinance entered, show persistent benefits that increase over time. Six years later, the treated GEs own businesses that have 35% more assets and generate double the revenues as those in control neighborhoods. We find almost no effects on non-GE households... These results show that heterogeneity in entrepreneurial ability is important and persistent. For talented but low-wealth entrepreneurs, short-term access to credit can indeed facilitate escape from a poverty trap...

Essentially all of the benefits of credit access accrue by increasing entrepreneurship on the intensive margin: for those individuals with an existing business before the entry of microfinance (who we call gung-ho entrepreneurs or GEs), we find economically meaningful, positive effects on household businesses and consumption. Within this group, the bulk of effects come from households who escape from the fixed-cost-driven poverty trap and move into a more productive technology (with the remainder coming from already-productive businesses scaling up to exploit constant returns). The rest of the sample–those who start new businesses, or who never start a business at all–exhibit essentially zero impact of credit access. Notably, for this group the effect is a fairly precise zero throughout the distribution: while these reluctant entrepreneurs and consumption borrowers do not experience benefits from microcredit access, neither do they appear to experience harm.

The paper has several important academic insights. The big policy insight (one which the authors do not draw) is the reinforcement of the fact that SMEs in general are credit constrained, and, importantly, of them certain types of enterprises could benefit from even micro-finance. So add in the management practice support and with small amounts of credit, there can be out-sized productivity effects. The problem is how to identify them?

3. The lemon effect in used car markets can be very significant. Sample this from a Danish study,

We estimate the model using data on car ownership in Denmark, linked to register data. The lemons penalty is estimated to be 18% of the price in the first year of ownership, declining with the length of ownership. It leads to large reductions in the turnover of cars and in the probability of downgrading at job loss.

4. The work of folks at the BIS have demonstrated how globalisation has contributed to lowering and reducing domestic policy control over inflation dynamics. Kristin Forbes adds a nuance to that argument,

CPI inflation has become more synchronized around the world since the 2008 crisis, but core and wage inflation have become less synchronized. Global factors (including commodity prices, world slack, exchange rates, and global value chains) are significant drivers of CPI inflation in a cross-section of countries, and their role has increased over the last decade, particularly the role of non-fuel commodity prices. These global factors, however, do less to improve our understanding of core and wage inflation. Key results are robust to using a less-structured trend-cycle decomposition instead of a Phillips curve framework, with the set of global variables more important for understanding the cyclical component of inflation over the last decade, but not the underlying slow-moving inflation trend. Domestic slack still plays a role for all the inflation measures, although globalization has caused some “flattening” of this relationship, especially for CPI inflation. Although CPI inflation is increasingly “determined abroad”, core and wage inflation is still largely a domestic process.

5. The biggest obstacle to the emergence of Euro as a competitor to dollar,

A new study by economists Ethan Ilzetzki, Carmen Reinhart and Kenneth Rogoff... argue that “a central reason is the scarcity of high-quality marketable euro-denominated assets, and the general lack of liquidity compared to dollar debt markets”. Because of credit downgrades in the previous crisis and a still-fragmented private securities market, the euro has too few of the reliable assets that global investors use as reserves: typically ultra-safe triple A-rated bonds issued by creditworthy governments or companies.

The European Central Bank agrees, according to Benoît Cœuré, a member of its executive board. “In our analysis, [the most important move] would be a deepening of European capital markets and the introduction of a safe asset. That would be a game-changer.” In fact, no currency has ever gained predominance without liquid markets in a benchmark asset, says Mr Eichengreen. “If [Europe] succeeds in significantly enhancing the international role of the euro without that step, it would be a first.” The lack of safe euro-denominated assets was aggravated by the 2010-12 eurozone sovereign debt crisis, when investors feared the single currency might fall apart. “It’s a perfectly fine idea to promote the euro in international markets,” says Gita Gopinath, IMF chief economist. “But the necessary condition for that is to improve the euro area architecture to strengthen resilience — centralised fiscal capacity, capital markets union, banking union.” 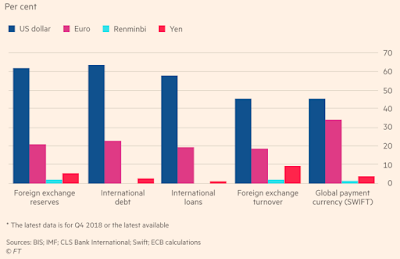 6. Jonathan Ford in FT has a nice article on how accounting practices can cover up for corporate failings, this time in the case of Thomas Cook - the art of paying out massive dividends through accounting tricks despite the company not having the wherewithal to pay out even a cent.

7. Fascinating article about the use of back-channel diplomacy by American Presidents.

8. As the latest PISA results indicate, student learning outcomes is a problem in the US too.

Here is a good primer about fiscal multipliers from the IMF.
Posted by Urbanomics at 7:27 AM