The China Effect - Steel market fact of the day

No industry reflects China's impact on the global economy than steel. The graphic below is constructed from this Peterson Institute report. 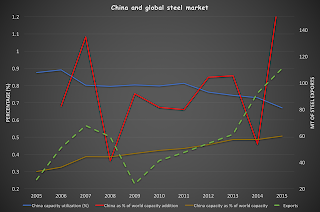 Since 2011, faced with a weakening economy, the Chinese capacity utilisation has been declining steadily. This has also coincided with a steady, and now ever steepening, increase in steel exports from the country. Interestingly, the major share of these exports have been going to the ASEAN economies, Africa, and Middle East, whereas the share going to US, Europe, Japan, and South Korea has been declining.

This is yet more evidence, a constant theme in this blog, that the brunt of damage from China's export machine is increasingly being faced by emerging economies. On the one hand, their domestic markets are easy target for aggressive Chinese exporters since these countries are unlikely to effectively litigate against China's unfair trade practices at the WTO. On the other hand, the traders from these countries struggle to compete with the heavily subsidised Chinese competitors.
Posted by Urbanomics at 3:12 AM