The widening inequality, especially driven by the out-sized compensation in the financial sector and the rising pile of corporate profits, and reflected in the stagnant median labor incomes, must count as the arguably the most disturbing social and political theme of our times.

Now Larry Summers has argued that monopoly profits, extracted by the growing concentration of market power across sectors among the top firms, is responsible for the increasing returns to capital despite the persistently low real interest rates. Profits, free-cash flows, and returns on capital are at historic highs among US corporates. 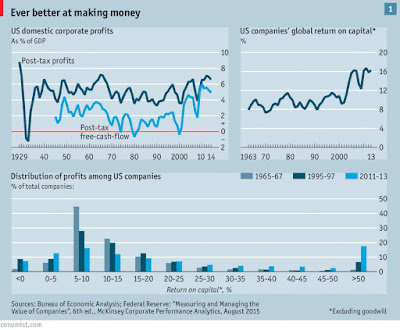 A spate of mergers and aggressive cost-cutting have boosted profitability from both supply and production sides. The persistence of high profitability and the likelihood of the same firms being the beneficiaries over time points to prohibitive entry barriers. Pointing to high levels of entry barriers, the Kauffman index of startup activity is at its lowest since the 1970s.

The Economist examined US firms in 893 industries, grouped into broad sectors, and found that two-thirds of them became more concentrated between 1997 and 2012 and the weighted average share of the top four firms in each sector rose from 26% to 32%. 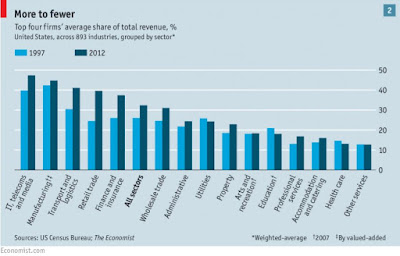 The concentration is especially pronounced in sectors like Finance, Retail, and Wholesale. 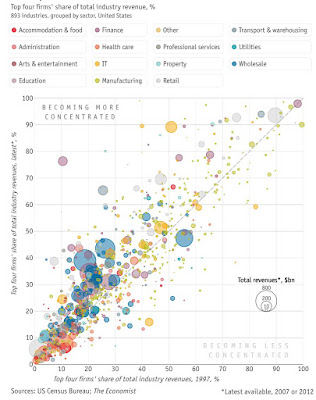 In this context, MR points to the findings of a recent study by Grullon, Larkin, and Michaelly which finds an alarming decline in publicly traded US firms and attendant concentration of economic activity,

There has been a systematic decline in the number of publicly-traded firms over the last two decades. Half of the U.S. industries lost over 50% of their publicly traded peers [from 6,797 in 1997 to 3,485 in 2013, AT].... This decline has been so dramatic, that the number of firms these days is lower than it has been in the early 1970s, when the real gross domestic product in the U.S. was one third of what it is today. This phenomenon has been a general pattern that has affected over 90% of U.S. industries... The decline has increased industry concentration, as the void left by public firms has not been filled by an increase in the number of private businesses or by greater presence of foreign firms. Firms in industries with the largest decline in the number of firms have generated higher profit margins and abnormal stock returns, and enjoyed better investment opportunities through M&A deals. Overall, our findings suggest that the nature of US product markets has undergone a structural shift that has potentially weakened competition.

This US CEA study finds a significant increase in the concentration of economic activity in many industries recent decades, a reflected in record levels of mergers and acquisitions. It also finds declining new firm entry and returns that are greatly in excess of historical standards. The share of US workers requiring some form of State occupational licensing grew five-fold over the last half of the 20th century to about a quarter of all US workers in 2008.

Nowhere is the concentration more pronounced than in the financial sector. Noted investor, Henry Kaufman, has cautioned that such concentration undermines the operation of market forces,

The number of FDIC-insured institutions fell from more than 15,000 in 1990 to a mere 6,300 today, and the ten largest U.S. financial institutions currently control some 80 percent of all financial assets... financial concentration increases the spreads for securities, drives up financing costs, increases price volatility, reduces traditional sources of liquidity, and requires greater government supervision of credit markets... Debt has been shifting tectonically as well... U.S. government debt... now equals – GDP; in 2000 it was only half of GDP. In the 1990s, corporate equity increased $131 billion while debt soared an astonishing $1.8 trillion. And the quality of corporate debt has been deteriorating... In the mid-1980s, the number of non-financial corporations rated AAA was 61; today it is 4.

The returns on capital invested, excluding goodwill, among the American publicly traded non-financial companies have become increasingly concentrated in a small segment at the 90th percentile and above, whose returns are more than five times those of the median. 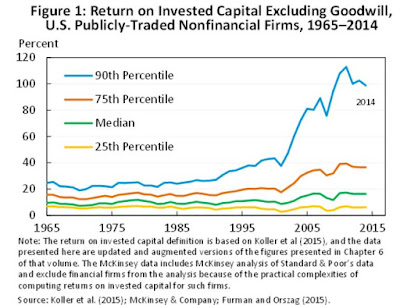 Another recent paper by Ryan Decker et al points to declining entrepreneurship, job creation and destruction, and economic dynamism in the US. It finds increased reallocation of jobs towards the more productive and more profitable sectors, which invariably require ever declining shares of workers. This has to be taken with evidence of declining workers internal mobility across occupational categories. 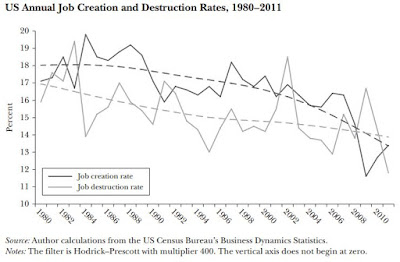 The opinion is divided on what are the factors driving these secular structural trends. But these trends assume significance for even developing countries which are already buffeted by adverse headwinds of premature de-industrialization and stagnation in global trade. If declining business dynamism (entry and exit), lower entrepreneurship, increased industry concentration, internal workers mobility are driven by factors that are more secular, independent of nature of economies, then they may prove insurmountable barriers to economic growth in these economies.
Posted by Urbanomics at 6:30 AM