Another teachable moment in currency management

After spending $28 bn over two years propping up the tenge, late last week, Kazakhstan's central bank announced a regime shift from exchange rate targeting to inflation targeting. The decision, prompted by the Chinese and Russian devaluations and falling oil prices, resulted in a steep plunge in tenge's valuation by nearly a quarter in a single day.

As the graphic shows, even by Kazakhstan's usual standards, with bouts of sharp devaluations, this one has been exceptionally steep.

Especially when compared to its oil exporting peers. 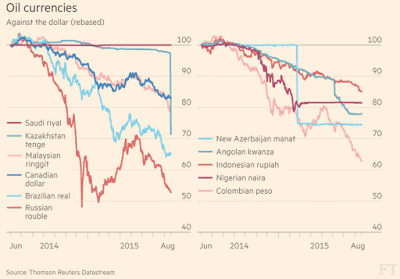 Oil dominates the country's export basket and contributes the lions share of the government's revenues, as seen from this 2013 export products graphic. 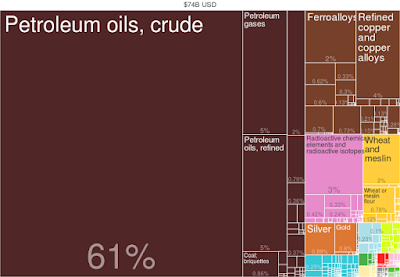 For such countries, a floating exchange rate regime can be a useful automatic stabilizer. As commodity price falls and current account balance weakens, a gradually depreciating currency would serve to both keep exports competitive and squeeze imports, thereby restoring the external balance. Similar forces work in the reverse with rising commodity price and appreciating currency so as to moderate capital inflows during the commodity upturns. Further, this dynamic would also serve to promote manufacturing diversification and mitigate the "resource curse" effect during good times, which is characterized by a hollowing out of the non-commodity tradeables sector, especially manufacturing. Most importantly, it would leave the country with the monetary policy autonomy to combat the headwinds arising from external shocks.

In this respect Kazakhstan is no different than many commodity exporting emerging market peers. In order to maximize revenues during good times, these countries play the foreign exchange markets to keep their currencies over-valued, thereby fueling asset price bubbles, only to be forced into depreciating sharply when the tide has turned and the central bank can no longer hold on. Such unpredictable reversals erode the country's macroeconomic policy credibility and markets punish it with violent swings. Inflation and economic stagnation, accompanied by banking crises, soon follow. Monetary policy discretion goes out of the window as the country is forced to hike rates to retain capital and rein in inflation. It is not devaluations per se that erode credibility and disrupts the markets, but sharp and unpredictable devaluations.

Nigeria, which has stubbornly kept its currency pegged to the US dollar, thereby suffering a steep drop in its oil revenues, looks most likely to soon burn out its reserves and be forced to let the over-valued naira depreciate steeply. 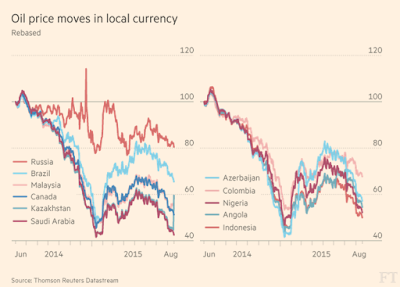 An example of such macroeconomic prudence, with the attendant credibility and stability that anchors inflation expectations and limits cross-capital flows volatility, which enables countries to weather the storm, is Colombia, another country dependent on oil exports. The FT writes,

Under successive presidents, Colombia put together a framework that aimed for structural fiscal balance, instituted inflation targeting and achieved relatively broad-based growth... Over the past year, the economy’s exposure to the oil price (more than 50 per cent of exports) has resulted in the Colombian peso being one of the weakest freely-traded currencies in the world, by falling 36 per cent over the past 12 months. Like most EM currencies, it received another kick downwards from China’s renminbi devaluation last week. The rapid depreciation alongside falls in dollar-denominated oil prices means that in recent months, Colombia’s oil revenues in domestic currency terms have fallen relatively little, even compared with other oil economies. Economists at Barclays calculate that oil priced in Colombian pesos fell just 1.3 per cent from early May to late July, compared with falls of 6.2 per cent in Russian rouble terms and 14.4 per cent if priced in Nigerian naira...

(unlike its peers) the Colombian central bank has left monetary policy on hold since last August. Colombian consumer price inflation has recently risen to 4.5 per cent, just above the central bank’s 2-4 per cent target band, but inflationary expectations have remained well anchored... the IMF forecast that the economy would expand 3.4 per cent this year, below last year’s 4.6 per cent but far better than the recessions forecast in Russia and Brazil, and that inflation would drop back below target.

Kazakhstan may well have now embraced an inflation-targeting regime. But on the issue of which monetary policy regime best suits such countries, Jeffrey Frankel has written here about the possible superiority of NGDP targeting. Writing in the aftermath of a shift in the nominal anchor from US Dollar to a basket of currencies in September 2013, Prof Frankel had cautioned against any adoption of inflation targeting,

An example illustrates the point.  If a truly serious CPI target had been in place five years ago at the time of the global financial crisis, then Kazakhstan would have faced a difficult and unnecessary dilemma when it was hit by adverse shocks in oil prices, the housing sector, and the banking system. The country would have had either to forego the necessary February 2009 depreciation of the tenge or else to violate strongly the CPI target as the devaluation pushed up import prices.  The former choice would have been dangerous for the economy, while the latter choice would have largely defeated the purpose of having announced IT in the first place (that purpose being long-term monetary credibility).

Instead, he suggested an NGDP targeting nominal anchor for monetary policy as the best automatic stabilizer for oil exporters like Kazakhstan,

Kazakhstan is vulnerable to a variety of possible shocks, such as a fall in the world oil price, which would be better accommodated by a more flexible exchange rate regime... An alternative anchor for monetary policy, in place of either the dollar exchange rate or any version of the CPI, is nominal GDP... the innovation would in fact be better suited to middle-income commodity-exporting countries like Kazakhstan. The reason is that supply shocks and trade shocks are much larger in such countries. In the event of a fall in dollar oil prices, neither an exchange rate target nor a CPI target would let the tenge depreciate. An exchange rate target would not allow the depreciation by definition, while a CPI target would work against it because of the implications for import prices. In both cases sticking with the announced regime in the aftermath of an adverse trade shock would likely yield an excessively tight monetary policy. A nominal GDP target would allow accommodation of the adverse terms of trade shock: it would call for a monetary policy loose enough to depreciate the tenge against the dollar.

Posted by Urbanomics at 5:00 AM

I don't know but am getting increasingly averse to all these ideas related to business of targeting. First it was exchange rate, then inflation and now NGDP. Worst is, none of these variables can really be targeted. The broad macro numbers keep surprising you given the several factors.

I mean we always thought it was so easy for central banks to create inflation but seeing the western world and Japan struggle to create inflation, one can be really weary of such techno management. I thought missing inflation targets on the higher side was the real problem. Could never imagine that missing the lower bank for so many months could be a challenge as well. The central banks have eased so much without bothering inflation much but has created so many other issues in the process.

I keep wondering why we do not look at an alternative of allowing banking/financial markets to work independently of a central bank?

All these problems of macro management emerge as we believe in powers of some agency which knows it all and can manage all these financial markets around us. It is as Hayek said just pretence of knowledge.

With all this digitization of currency and so on, I guess we should also argue for a free banking system. This does not imply deregulation per se. We can still have a central bank but it just works like a regulator. Just like SEBI does. But no central bank really interferes in macro affairs and let things be.

What do you think?