Turkey has been one of the most impressive economic growth stories outside India and China over the last decade. But, like all others, it too could not avoid the contagion effects of the Great Recession, suffering a sharp economic contraction in 2009. However, it recovered spectacularly in the aftermath of the Great Recession, growing at 9.2% and 8.5% in 2010 and 2011 respectively. The flip side of this impressive growth has been a build-up of dangerous signals elsewhere in the economy. As The Economist warned in mid-2011, signatures of overheating were evident everywhere in the Turkish economy.

As indicated in the IMF 2011 Consultation Paper, the external and internal balances have been casualties of the recovery. Its rapid growth concealed disturbing structural imbalances which had crept into the economy during the period of sustained growth. The rapid economic growth was built on the foundations of spurt in private investment, household consumption and imports. This graphic constructed from Eurostat indicates the surge in private investment and imports in the 2010-11 period. 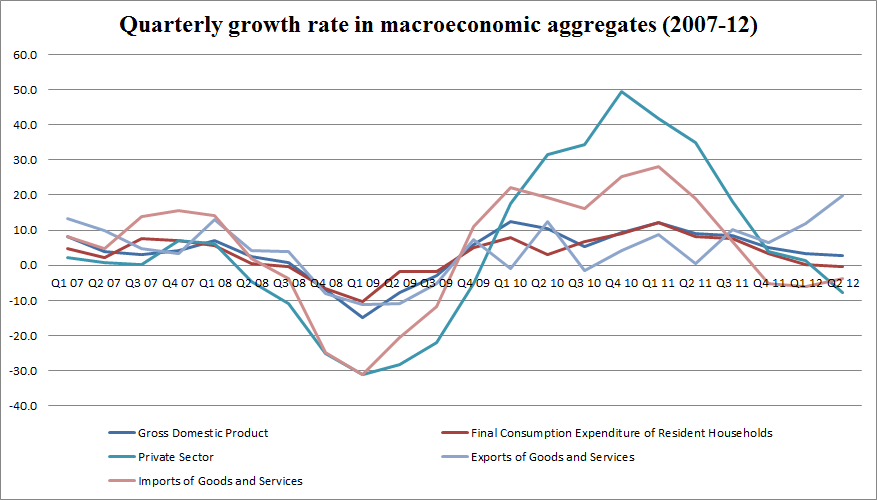 Capital inflows from the core economies of Europe increased, encouraged by the strong economic growth signals coming from the country. The IMF’s Consultation Paper writes,

Loans to the private sector grew by around 40 percent y-on-y during Q4 2010 to Q2 2011, to reach 48 percent of GDP. This reflected the historically-low interest rate environment and banks’ intense competition for market share. Lending was especially rapid to households (for general purpose and housing loans) and to small- and medium-sized firms due to strong demand and higher profit margins on these loans. With the increase in resident’s deposits - previously banks’ main funding source - falling far short of the increase in lending, banks’ average loan-to-deposit ratio jumped from 76 percent at end 2009 to near 95 percent in mid-2011. To expand loans, during the first nine months of 2011, banks relied on financing sourced from abroad to the same extent as residents’ deposit growth.

As credit growth boomed, inflationary pressures became unhinged. Unemployment rate declined and the labor market tightened. Wages have risen sharply over the past three years. The rise in wages has also adversely affected the country’s external economic competitiveness. This has adversely affected exports, as reflected in the slowdown in exports, despite increased economic activity. 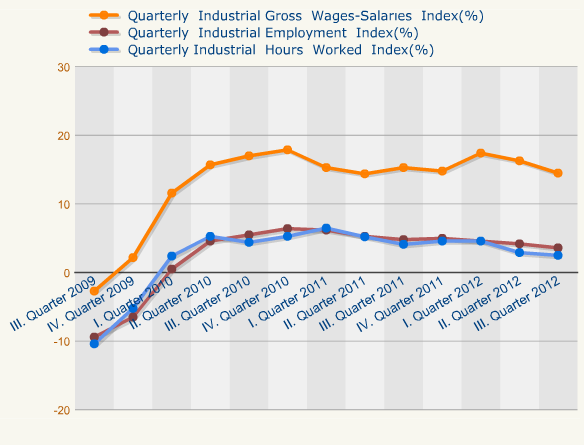 The central bank’s pro-cyclical policies too may have contributed to the inflationary pressures getting unhinged. Once Turkey opened its dialogue with European Union for membership in early 2005, investors formed expectations of its eventual entry into the Union and the implicit European guarantees that come with membership. Turkish government bond yields fell and capital inflows surged. The Turkish central bank has amplified this trend by embracing an extended period of monetary accommodation, and has kept its repo rates at record low rates.

This trend is similar to that with the case of the peripheral European economies in mid-nineties after the decision to join thesingle currency was announced. As happened there, capital inflows into the Turkish economy, to finance consumption and investment has surged. The rising wages and resultant decline in Turkish external competitiveness has the trademark signature of what happened to the peripheral European economies like Greece and Portugal.

In many respects, Turkey’s macroeconomic situation is typical of developing countries which experience such positive shocks. Access to cheap capital often tends to increase credit growth, boost consumption, raise imports, and spur investment activity. All these make the non-tradeable sector more attractive, raising investment and supply. This often comes at the expense of the tradeable sector. As the economic growth exceeds its potential output, inflationary pressures get unleashed.

In the Salter Swan model of macroeconomic balance, the Turkish economy stands at the point indicated by B. In the aftermath of the 2008-09 crisis, the economy recovered smartly on the back of a mixture of public spending, public consumption, and private investment. External capital inflows contributed significantly to this financing this trade. However, all of these policies and resultant effects pushed the economy from A to B, causing both external and internal imbalances. The internal imbalance is reflected in the overheating economy. The external imbalance is manifested in the rising and unsustainable current account deficit. 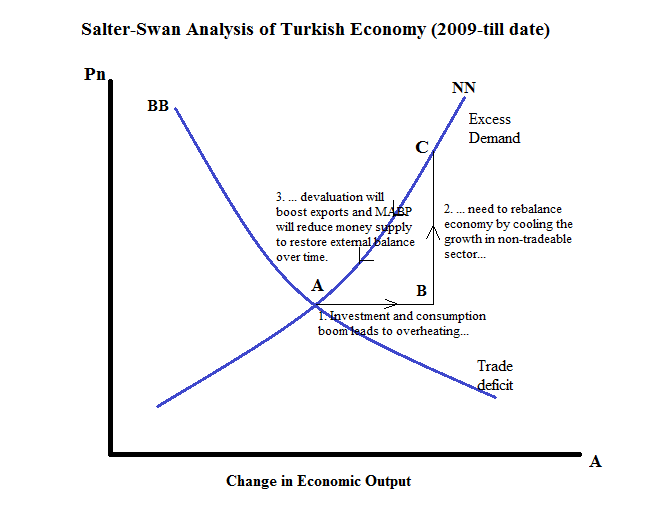 In order to re-balance its economy, Turkey needs to immediately address its twin imbalances. As the Salter-Swan model indicates, the economy needs to get back to A. This has to be achieved by re-balancing the internal sector, by cooling down economic growth and rectifying the resource mis-allocation away from the non-tradeable sector. This can be done by the central bank reversing its accommodatory policies and raising interest rates. This will slow down credit growth and thereby lower consumption and investment.

More fundamentally, the increasing prices for the non-tradeables (as reflected in the inflationary pressures) will dampen demand and contribute towards shifting economic activity away from non-tradeables. The higher Pn, ratio of price of non-tradeable and tradeable goods, will boost export activity. The economy will move up in the Salter-Swan model from B to C. If the central bank allows the Turkish lira to depreciate further, it will contribute towards raising Turkey’s external competitiveness.

The devaluation will help restore the economy’s external balance, over time, through three effects. First, the higher exchange rate will increase the competitiveness of Turkish exports and boost it. Second, the real balance sheet effect will contribute towards reducing imports. Third, in the absence of exchange rate stabilization policies and sterilization, the monetary approach to balance of payments effect tells us that the economy will re-balance by lowering the money supply. The LM curve in the IS-LM model will be pushed back to its long-run equilibrium. This corresponds to the movement from C to A in the Salter –Swan model.

It is imperative that Turkey address its internal and external imbalance problems at the earliest, failing which there could be the possibility of it slipping down the same path as Greece.
Posted by Urbanomics at 2:11 AM

Email ThisBlogThis!Share to TwitterShare to FacebookShare to Pinterest
Labels: Europe