Eurozone - fiscal irresponsibility was not the problem

The Eurozone crisis is far from a simple story of fiscally irresponsible governments running up huge debts that they are now struggling to repay.

As the graphic below shows, public debt as a percentage of GDP has remained remarkably stable for most countries since the mid-nineties. In fact, it even declined for countries like Italy, Spain, and Ireland - all currently accused of being among those most fiscally irresponsible. Even Greece did not suffer anything like the spectacular explosion in public debt that has currently become conventional wsidom. Now, once the crisis exploded and economies tanked, the sovereign debt ratios have risen steeply and have become dangerously high for many of them. 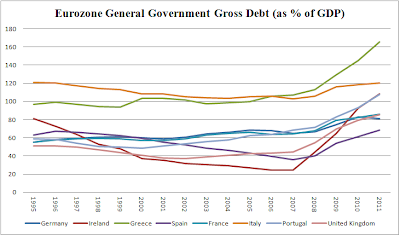 In fact, apart from Ireland, none of these economies accumulated debt much higher than the prevailing average debt levels for developed economies. 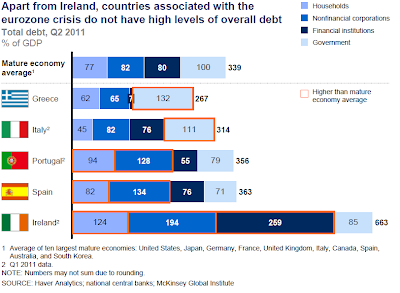 Even government expenditure as a percentage of GDP has remained more or less stable. The graphic below does not have the signatures of the classic fiscal irresponsibility induced financial crisis and economic recession. It exploded in Ireland. But in Greece, Spain, and UK, while it did increase, but not at a rate that merited a financial crisis and recession of this magnitude.

So are households responsible? While household consumption did rise in Ireland and Greece, it was remarkably stable elsewhere. These are not the usual indicators of a crisis of this magnitude. 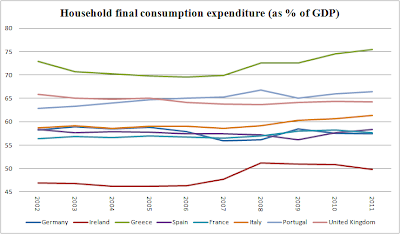 Clearly closer scrutiny is required. More than government and household balance sheets, those of non-financial corporations and financial institutions in the peripheral economies today look unsustainable. 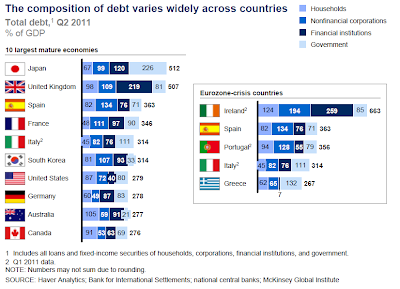 The massive inflow of cheap capital in the aftermath of the currency union led to unsustainable resource misallocation and bubbles. Construction activity and real estate markets in many countries boomed. Ireland, Iceland, and Spain, were the three worst affected by this misallocation problem. In fact in Spain, financial institutions have accumulated 323 billion euros ($418 billion) in real estate assets, of which 175 billion euros was labeled “problematic” by the Bank of Spain last year. Notice that construction activity declined throughout this period in Germany.

Corporates across manyof these peripheral economies binged on these inflows. As the graphic below shows, corporate borrowings boomed, especially in countries like Spain. Again Germany stands out in its restraint. As the Times recently wrote, the Spanish debt crisis is built on corporate borrowing, and its nonfinancial private sector debt at 134% of GDP is higher than any major economy in the world with the exception of Ireland. 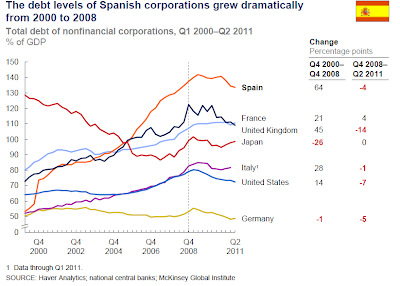 There are two immediate crises that need to be addressed. The most important is the banking crisis, which directly impinges on institutions in the center and the periphery. The core economy banks remain heavily heavily exposed to the peripheral economy banks. As the saying goes, it becomes your problem if someone has borrowed a million dollars as against a few hundred dollars. If recent events are any indication, Spain looks set to go down the Ireland route and nationalize its banking system so as to avert a full-fledged banking crisis.

A series of reform measures have been announced by Spain, where three-fifths of Spanish banks’ €310bn property lending exposure is “problematic”. Increased provisioning for bad loans, including the possibility of a "bad bank" (like was done in Ireland in 2009) to house these "problematic" loans, so as to restore market confidence and ease the credit markets, are among the reforms. Then there are the larger Eurozone reforms required - ECB to become a lender of last resort, the creation of a European Deposit Insurance and Resolution Fund. One immediate policy change could be to permit the euro zone’s new bailout fund, the European Financial Stability Facility, to lend directly to struggling banks rather than solely to national governments.

Then there is the challenge to prop up economic activity. The private sector is hobbled with the double whammy of badly bruised balance sheets and badly frozen credit markets. Households too are in no position to step in with the big-bang required to boost aggregate demand. In the circumstances, there is no alternative to some form of government spending and significant external support. In a recent FT op-ed Nouriel Roubini suggested "monetary easing by the ECB, a weaker euro, fiscal stimulus in the core, less front-loaded austerity in the periphery, more international firewalls and debt mutualisation".

But unfortunately, austerity remains the preferred medicine. A starving man is now being deprived off his only remaining source of food. And all this, even at the cost of pushing him to death, is to drive home the message of prudence and eliminate any moral hazard of him becoming lazier still.
Posted by Urbanomics at 6:16 AM

This article presents a more thoughtful and in-depth view than much of what I've been reading about the Eurozone crisis to date. Thank you.