1. Putting to rest the debates and concerns about economic growth in an open and liberalized economy, economic growth was faster in the 2000s than the 1990s in most states. Rajasthan, West Bengal, and Himachal Pradesh were the only laggards. The growth rates in many of other states more than doubled in the 2000s. 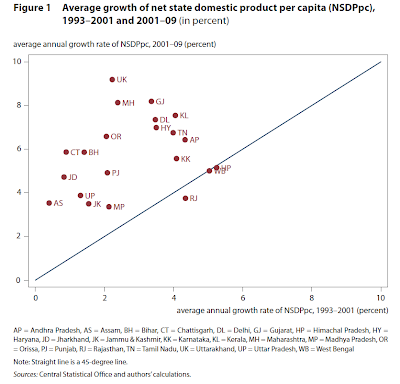 Conversely, this also meant that these state economies were more exposed to the global economic factors. Therefore when the world economic slowdown struck, the faster growing and more globalized states were more adversely affected.

2. One of the common features of economic growth is that as economies liberalize and growth picks up, a trend towards covergence takes hold. The poorer states, by virtue of growing faster than the richer states, start catching up with the latter’s level of income. This convergence is also critical towards promoting a consensus on liberalization and reforms and also sustaining the high growth rates.

Unfortunately, a regression of the average annual growth rates across all states and initial percapita income of 2001 reveals little convergence. In fact, it shows that richer states on average grew faster so that the inequality across states is actually increasing. This relationship holds for different time periods and different state sample sizes. It should sound a note of caution for policy makers that the robust growth in the traditional laggard states in the last decade is not enough to promote the much-needed convergence. 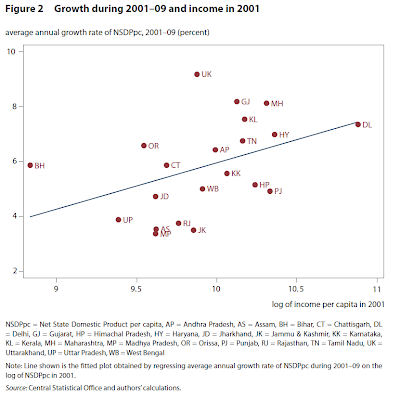 3. The biggest concern is the possibility that one of India's greatest strength, its young workforce (demographic dividend), could also turn out to be its biggest problem. In the last decade of 20th century, this beneficial impact of this favorable demographics was favorable in the economic growth trends as seen from the graphic below. 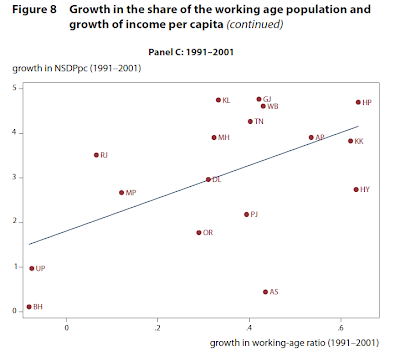 However, the picture appears to have reversed in the first decade of the new millennium. Economic growth has been found inversely correlated with the working age population growth rates among the various Indian states. 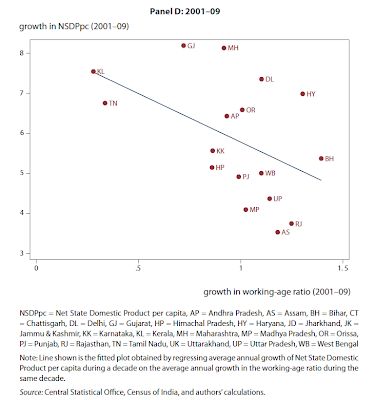 The biggest concern states in this regard are Rajasthan, Bihar, UP, Assam, and Madhya Pradesh where the demographic dividend is in serious danger of turning sour. In many respects, this reversal of trend over the last decade is one of the biggest challenges facing India. Unfortunately, the policy paralysis of recent years means that it is in serious danger of being overlooked.
Posted by Urbanomics at 6:15 AM