It should not come as a surprise to anyone that student learning levels in our schools are abysmal. Numerous reports, most notably the annual ASER reports, have confirmed that our schools system is in a serious state of disrepair.

But two studies, highlighted in Mint over the past one week, point to a malaise that is much deeper, universal, and shocking in its magnitude. Our school education system is a national crisis, one that most seriously threatens our future economic growth prospects. The human resource plumbing of our economy needs immediate fixing.

First, the Quality Education Study (QES) 2011 conducted by Wipro and Educational Initiatives in some of the "best" private schools in five metropolitan cities show that learning levels of their students are way behind global averages. It finds that the outcomes are depressing even in issues like civic responsibility, sensitivity towards differently able, and acceptance of diversity. Anurag Behar's conclusion is striking,

Actual learning levels of students in our best schools are below global averages. Our students did well in areas that required memorization and procedural skills, but are way behind when it came to understanding, conceptual clarity, thinking and application...

India’s school education is in bad shape, not just the government- and low-fee private schools, but even the 'best schools' that are the exemplars for all other schools to emulate... These schools, where the students come primarily from upper middle-class homes, reflect significant gender and community bias and low social sensitivity.

The second study, PISA 2009+, evaluated 15-year-olds’ skills in overall reading, mathematical and scientific literacy on a comparative basis across 10 countries. Himachal Pradesh and Tamil Nadu, which are thought to be the best performing school systems in India, were part of the survey. Both came at the bottom, on par with Kyrgyzstan in all the three parameters. 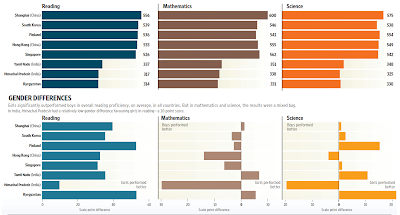 Comparing with the full PISA 2009 study of 74 nations, Tamil Nadu ranked 72 and Himachal Pradesh 73, just ahead of Kyrgyzstan in mathematics and overall reading skills. Shanghai in China topped the PISA rankings in all three categories. Its findings brought out in Mint are shocking,

"In Tamil Nadu, only 17% of students were estimated to possess proficiency in reading that is at or above the baseline needed to be effective and productive in life. In Himachal Pradesh, this level is 11%. This compares to 81% of students performing at or above the baseline level in reading in the OECD countries, on an average... In other words, only a little over one in six students in Tamil Nadu and nearly one in 10 students in Himachal Pradesh are performing at the OECD average...

Only 12% of students in Himachal Pradesh and 15% in Tamil Nadu were proficient in mathematics against an OECD average of 75%; when it came to scientific literacy among students of class X, the proficiency level in Tamil Nadu was 16% and in Himachal, 11%, as against an OECD average proficiency of 82%. In Malaysia, 56% of students were proficient in reading and 41% in mathematics. Similarly, in the United Arab Emirates, the mathematics proficiency levels was estimated at 49% and for reading, 60%. Like India, both countries participated for the first time."

The key to improving learning levels in our schools is to improve the quality of classroom transaction. This demands replacing rote learning with instilling conceptual understanding in students. Teacher initiative and headmaster leadership are critical to achieving this transformation. However, the difficulty lies in achieving this transformation on the humunguous scale that India requires.

The real challenge is to do this in an environment where the odds are heavily stacked against such quality improvements - demotivated and disinterested teachers, headmasters without any initiative, students from adverse socio-economic backgrounds, deficient infrastructure, an eco-system which favors rote learning, and so on. Putting learning levels at the center of the agenda would be a good place to start the process of repairing our school education system.
Posted by Urbanomics at 5:58 AM

Email ThisBlogThis!Share to TwitterShare to FacebookShare to Pinterest
Labels: Education