Widening inequality is arguably one of the most important socio-economic challenges facing societies, rich and poor, across the world. Unfortunately, despite the steep widening of inequality in recent years, it has not generated the anticipated level of social outrage.

In a recent article in the NYT, Ian Ayres and Aaron Edlinn, had called for a Brandeis tax, as a tax directly on inequality. The Brandeis Ratio is the average income of the richest one percent of household to the average median household income. This ratio has risen alarmingly from 12.5 in 1980 to 36 by 2006. The Brandeis tax be an automatic extra tax on the income of the top 1 percent of earners — a tax that would limit the after-tax incomes of this club to 36 times the median household income. It would therefore be an inequality capping tax.

In a series of posts in Freakonomics, they take their argument one step ahead and advocate that the debate on income inequality be framed in terms of "medians". They write,

"Framing income inequality in terms of "medians" is also part of a larger goal of making the median household incomes more salient... Part of our goal is to change the way politicians speak about income equality. Framing the income of the wealthy in relation to the median income will help us all keep in mind the relative success of the middle class.

It might even be useful to describe other things in terms of medians. A new Cadillac Escalade will run you 1.4 medians. A year’s tuition at Yale Law School is about .88 medians. We might even restructure government salaries so that they automatically adjust with the median... To raise the prominence of the median measure, government could standardize a "mi" symbol."

Behavioural psychologists have long pointed to the power of framing in re-orienting the human mind. In the instant case, absolute income numbers are not very effective in signalling about the degree of inequality. However, when the same is framed in terms of "mi", the extent of inequality becomes cognitively striking.

Similar framing can be an effective strategy in the various conservation (water, electricity etc) and environmental awareness campaigns. Water closets could be rated based on the number of buckets of water used. Air conditioners can be rated by describing their energy consumption as a multiple of that of a fan. In all these cases, the message is framed in a language that is readily graspable and therefore cognitively salient.

In this context, economist Robert Frank has constructed a Toil Index to more evocatively highlight the middle-class squeeze. It represents the number of monthly hours of work required to rent a house in an area served by a school of average quality. And it has just shot up vertically since the last decade. 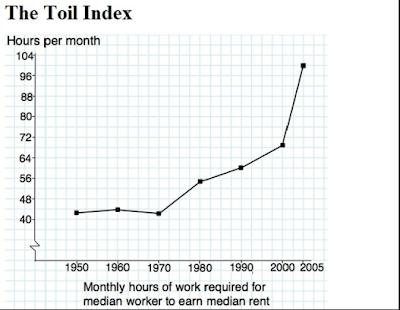 Posted by Urbanomics at 6:23 AM