Over the last few years, there have been a proliferation of field experiments across developing countries which have tried to examine the impact of pricing on the uptake of various health protecting products by poor people. What is the price (in terms of both incentivizing purchase and ensuring usage of the product) or subsidy that delivers the greatest bang for the buck?

The standard belief has been that people will not value products and services that are provided free. It is therefore most effective if these products and services are delivered at some small nominal cost, so as to foster a sense of ownership among the beneficiaries. People are more likely to use soap for cleaning their hands or chlorine for sanitizing drinking water or ITNs to keep-off mosquitos if these products are provided at nominal rates.

However, Randomized Control Trials (RCTs) in Kenya, Zambia and India have shown that uptake for products like insecticide treated bednets (ITNs), soaps, chlorine pellets, and de-worming tablets was highest when they were distributed free and uptake reduced exponentially when prices were raised even slightly. These findings are now being invoked to call for free distribution of health protecting, education improving and other welfare enhancing products and services to poor people across the world. 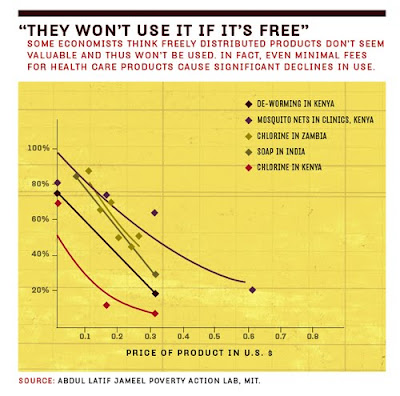 In fact, the RCT experiments have gone further and explored various other dimensions of usage. Pascaline Dupas and Jessica Cohen found several interesting results from their ITNs RCTs in Kenya - those who purchase ITNs are no more likely to be sick at the time of purchase (screening effect); those who are distributed free are no less likely to use it than those who paid (subsidized prices) and purchased nets (sunk-cost effect).

However, they found that subsidized positive prices dampens demand - ITNs uptake drops by sixty percentage points when its price increases from zero to $0.60 (or from 100% to 90% subsidy). Another study that provided un-subsidized ITNs with micro-consumer loans in India found that the uptake (usage the previous night) was just 16%, compared to 2% in control areas and 47% with free distribution.

There are several imponderables and mixed results that prevent drawing any generic inferences about pricing from these experiments. It is not possible to argue that free provision unambiguosly increases usage. Further, if a price is charged, it is even more difficult to arrive at a reasonably accurate price point where both purchases and usage is optimized for each product. Uncertainty on pricing can tip the scales either way. A few observations from these studies

1. It is premature to start generalizations from these results. I am inclined to believe that there may exist a trade-off between awareness and price that determines uptake of such products. Accordingly, the uptake is likely to be more even with positive subsidized prices if people are aware of its benefits (this does not equate to those who require such products more). Conversely, with lower awareness, free provision is likely to be more effective. It is however, difficult to draw a generic conclusion to this effect for all products and services.

3. The inferences from these studies are critically dependent on the contexts and varies across products. For example, while there is little evidence that those most in need of ITNs are more likely to buy and use it, the purchase (though not usage) of chlorine disinfectant liquid has been found dependent on need.

Another example of contradictory outcomes is with the provision of free school uniforms for children. Diana Hidalgo, Mercedes Onofa, and others found negative impact from a randomized experiment that provides free uniforms to primary school children in Ecuador. They found that "parents who pay for their children’s uniforms (the control group) feel more committed to the school than parents who got the uniforms for free (the treated) and therefore encourage their children to attend school". In contrast, a study in Kenya "found that providing a free school uniform increased attendance of young children by 6.4 percentage points".

4. In the final analysis, the purchase and use patterns of each of these products depend on a series of perceptions about its relative efficacy and utility for the consumer. In some cases, people are likely to show a reduced uptake when a product which was hitherto offered free was now offered for a small positive subsidized price, whereas in some others there would be no such effect. In some other cases, people are likely to see free products as signalling inferior quality and therefore show limited interest, whereas a high (but affordable) enough price would signal superior quality. In some cases, when people play a high enough price (how much is this "high enough" price?), the sunk-cost effects would take prominence and force people into using the product, while is cases like chlorine usage in Zambia showed no such effect.

5. Finally, to the extent that all such interventions are ultimately successful if they deliver on outcomes, there is no guarantee that such free supply will generate the intended results. A recent RCT of ITN usage in Orissa involving free distribution and purchase at unsubsidized prices with consumer micro-loans found little evidence of any "improvements in malaria and anemia prevalence, measured using blood tests". The authors attribute the failure to "insufficient ITN coverage" among the treatment villagers.

This debate again highlights the fundamental weakness with RCTs - the problem of generalizability. How and why do these interventions succeed? What processes and which environments are a pre-requisite for the success of a program? What is the role of cultural and other environmental issues on each intervention? Then there is also the limitation with how much can we generalize such results.

See this JPAL Bulletin explaining the benefits of free supply.
Posted by Urbanomics at 6:37 AM