Back to square one - financial market regulation?

The bitter lessons of the sub-prime crisis appears to be slowly receding away from memory and the unhealthy practices that inflated the sub-prime bubble era are returning back with vengeance. Now that the markets are back to normal, atleast in appearances, the urge to return to the boom days is proving irresistible.

The latest evidence comes from the US Federal Reserve’s recent decision to allow major banks to increase their dividends and to buy back shares. The decision comes in the aftermath of the Fed's Comprehensive Capital Analysis and Review (CCAR), a cross-institution study of the capital plans of the 19 largest US bank holding companies.

In an excellent post, Simon Johnson has strongly contested this decision and the validity of the CCAR to reliably assess the strength of banks

"The Fed’s decision on dividends effectively lets the banks pay out shareholder equity, making the banks more highly leveraged... Bank executives and other key personnel are paid on a "return on equity" basis, so this increases their upside — that is, what they will make as long as the economy and their sector does well... Any individual bank will want to keep its equity levels low, because its executives and owners are not worried about system-wide spillover costs, such as what happens to other banks when one bank fails."

The failure risk for big banks is mitigated by the blanket insurance provided by the too-big-to-fail problem - governments cannot allow such institutions to sink for fear of a financial market meltdown. The bank executives, creditors, and even shareholders, all suffer from the moral hazard problem arising from this.

In a letter to the Financial Times, Anat R Admati and her colleague financial academics, had this to say about dividend payouts and share buybacks,

"A dollar paid out to shareholders through either dividends or share repurchases is a dollar that would not be accessible to creditors in a situation of financial distress. For this reason, and to prevent the shifting of value from debt holders to equity holders, debt covenants typically restrict dividend payments when leverage is high... taxpayers should be concerned when banks pay dividends and remain thinly capitalized, because, as we have seen, taxpayers are the ones who are likely to end up covering the banks' liabilities in a crisis... retaining earnings is generally viewed as the least costly way to raise funds and build capital, as it avoids the transactions costs associated with new equity issuance."

This debate revolves around one of the most fundamental problems in modern financial markets - who will bear the cost of addressing the systemic risks (with its massive negative externalities) that are generated by certain actions of banks, what should be that cost, and in what form should it be levied?

It is widely acknowledged that adequate equity capital and reasonably high enough counter-cyclical risk weighted capital reserves are necessary to meaningfully resolve these problems. The global banking regulators recently announced the Basel 3 regulations in an effort to mitigate the systemic risks that arise in the financial markets. However, a large number of influential financial economists have argued that the capital reserves required to address such risks are much higher than what is proposed under the Basel 3.

In an excellent NYT article Gretchen Morgenson points to a few other instances of attempted regulatory dilution as the Dodd-Frank Law becomes operational. These measures are being pushed by taking the cover of getting the securitization, derivatives and the mortgage market moving again and to buoy falling home and other asset prices.

One of the biggest achievements of the new legislation was to route all derivative trades through clearing houses and exchanges. However, now bankers are calling for exempting currency swaps from Dodd-Frank citing a provision that permits the Treasury secretary to exempt foreign-exchange swaps from the regulation. Foreign exchange swap trades are in the range of about $4 trillion a day, and trading in foreign-exchange contracts generated revenue of $9 billion in 2010 in the top five US banks, more than was produced by any other type of derivative.

Critics say that the only the only reason this market did not seize up like others during the meltdown was that the Fed lent huge amounts — $5.4 trillion — to foreign central banks through so-called swap lines during the fall of 2008. However, the Treasury Secretary Tim Geithner looks inclined to providing the exemption.

There are details of interpretation of specific provisions in the Dodd Frank law that could determine whether the relevance or otherwise of the regulation. One concerns how regulators define a 'qualified residential mortgage'. Morgenson writes,

"Issuers of asset-backed securities that are made up of such loans needn’t keep any credit risk of those securities. But sellers of loan pools that don’t consist of qualified mortgages are required to retain some of the risk in them. This provision was meant to eliminate the perverse incentives of the mortgage boom, when packagers of loan pools were encouraged to fill said pools with toxic waste because they had little or no liability for the deals once they were sold.

What constitutes a qualified mortgage has become a battleground issue because of the risk-retention rules under Dodd-Frank. Qualified mortgages should be of higher quality, based upon a borrower’s income, ability to pay and other attributes to be decided by financial regulators... Among the questions to be considered is how much of a down payment should be required in a qualified loan, and whether mortgage insurance can be used to protect against the increased risks in loans that have smaller down payments.

The use of mortgage insurance during the boom effectively encouraged lax lending. Investors who bought securities containing loans with small or no down payments were lulled into believing that they would be protected from losses associated with defaults if the loans were insured. But when loans became delinquent or sank into default, many mortgage insurers rescinded the coverage, contending that losses were a result of lending fraud or misrepresentations. When they did so, the insurers returned the premiums they had received to the investors who owned the loans.Lengthy litigation between the parties is under way but has by no means concluded.

Clearly, for many mortgage securities investors, this insurance was something of a charade. So any argument that mortgage insurance can magically transform a risky loan into a qualified residential mortgage should be laughed off the stage. And yet, mortgage insurers are making those arguments vociferously in Washington."

She also points to the battle to re-open trade on covered bonds - pools of debt obligations that have been assembled by banks and sold to investors who receive the income generated by the assets, while the issuing bank retains the credit risk. The problem with this is that since the investors who bought the covered bonds would have first call on the banks' assets (over that of the FDIC), this would wind up bestowing a new form of government backing (FDIC's deposit insurance) to the major banks issuing the bonds.

And confirmation that things are indeed getting back to normal comes from the graphic below of financial sector (it accounts for less than 10% of the value added in the economy) profits, which have regained its pre-crisis share and is back to more than 30% of all domestic US profits 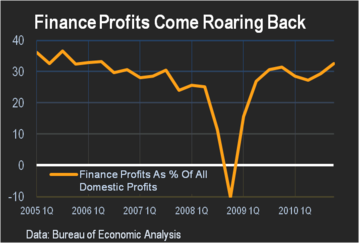 Felix Salmon should have the last word,

"Banks are still extracting enormous rents from the economy, and profits which should be flowing to productive industries are instead being captured by financial intermediaries. We’re back near boom-era levels of profitability now, and no one seems to worry that the flipside of higher returns is higher risk. Any dreams of seeing a smaller financial sector have now officially been dashed. And the big rebound in corporate profits since the crisis turns out to be largely a function of the one sector which we didn’t want to recover to its former size."

Posted by Urbanomics at 6:06 AM