However, Businessline points to preliminary estimates for the Twelfth Five Year Plan (2012-17), project that private sector will form 62% of the total 75000 MW (or 46500 MW) of capacity addition in conventional energy sources. The total capacity addition requirement for the Plan is targeted at 88,000 MW, which includes 13,000 MW from renewable energy sources. State and Central utilities are expected to form 20% and 18% respectively of the remaining. 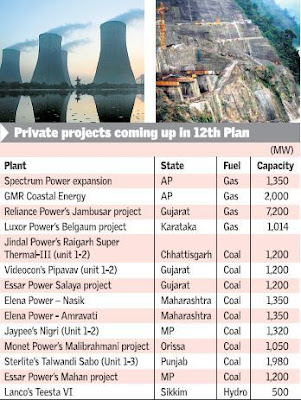 The transition to the tariff-based bidding regime from the coming January will give the private developers an edge in bidding for future capacity addition projects. In any case, with mounting experience, the private sector have been improving their experience in commissioning of new projects. The private sector formed 45% or 4313 MW of the projects commissioned in 2009-10.

Given the massive and growing demand, manifested in the widespread suppressed demand and resultant load-sheddings, no amount of capacity addition will satisfy demand for the foreseeable future. The projected capacity addition will barely help maintain the current power management scenario. China currently adds nearly 100000 MW a year, whereas India has projected adding less than 200000 MW in the ten year period of Twelfth and Thirteenth Five Year Plans. In that time, at the current rate, China would have added five times more capacity!

Therefore, while commendable, it is important that private sector be able to come up with even more ambitious capacity addition programs. This assumes greater significance in view of the anticipated negative impact on government sector projects due to the introduction of a tariff-based bidding regime.
Posted by Urbanomics at 6:49 AM