One of the biggest concerns over the past few months has been the anemic private investment environment. This is despite ultra-low interest rates (and it is certain to remain so for atleast the medium-term), inflation well under control, and corporate profits (especially of the larger firms) rising across US, Europe, and Japan. Evidently, given the uncertainty about economic prospects and demand-side conditions, the growing cash-flow is being saved (and/or used to repay debts), instead of being reinvested.

A recent op-ed in the Times by Yves Smith and Rob Parenteau about the trend of businesses across US, Europe, Japan, China, and even India, saving their surpluses (by investing in financial markets) instead of ploughing the profits back into their own enterprises. It points to a 2005 report from JPMorgan Research which noted that, since 2002, American corporations on average ran a net financial surplus of 1.7% of GDP — a drastic change from the previous 40 years, when they had maintained an average deficit of 1.2% of GDP.

Much the same trend has been in evidence in India too, with corporates preferring to pay-off their debts instead of making investments. The latest annual reports of 360 private companies for 2009-10 shows that corporate India has substantially reduced its leverage this year by raising fresh equity and repaying debt. The robust growth in profitability (and resultant internal accruals), increased business confidence, and strength of the equity markets (and resultant increased opportunity to raise equity) have made corporates rely less on the debt markets.

For 2009-10, while equity expanded by 21.5%, total debt rose by only 5.9% (it rose 35% in 2008-09 as firms loaded on debt to tide over the recession), resulting in the cumulative debt-equity ratio for these companies falling from 0.61 to 0.53. Further, due to falling interest rates, the average cost of borrowings (computed as interest cost divided by average debt) fell from 6.2% to 5.4% for the above companies over the past year.

Yves Smith and Parenteau attribute this to a worrying trend of public companies obsessing with quarterly earnings and short-term profits to impress the markets, instead of spending money on expansion and new investments. These companies also prefer to pay their executives exorbitant bonuses, or issue special dividends to shareholders, or indulge in equity buy-backs, or engage in purely financial speculation. They highlight attention on the need to create incentives for corporations to reinvest their profits in business operations - either through "an aggressive tax on retained earnings that are not reinvested within two years" or "a tax on the turnover of corporate financial investments" or fiscal incentives for investments in sunrise sectors.

However, a more immediate concern is the strong possibility that businesses may be hoarding cash in expectation of a double-dip recession and increases in interest rates that would make debts costlier (not so much in India as in the developed economies). This is natural given the uncertainty surrounding economic prospects and demand-side weakness.

Econ 101 teaches us that private sector (households and businesses), government spending/consumption and exports are the three sources of sustaining aggregate demand. With most major economies coupled into a recession, the external sector may not be able to provide much comfort, leaving governments to shoulder the responsibility.

In other words, the increasing trend towards funneling savings towards financial investments (instead of ploughing them back into the business) and/or for repayment of older debts, means that relying on the private sector to pull the economy out of the downturn is not going to be particularly effective. In the absence of private sector demand and bleak prospects with external demand, we are left with only the government sector. Another round of stimulus spending by governments may therefore be essential if the economy has to get back to normal in reasonable time.

A debate in the Economist too explored the same issue and came to explanations that point to similar conclusions. Xavier Gabaix points to three reasons for businesses saving instead of spending - firms still face a macroeconomic 'tail risk' or 'disaster risk'; firms may face tight credit constraints; and in anticipation of higher future taxes (a Ricardian equivalence result), firms start to save now. Hal Varian points to a self-fulfilling prophecy arising out of firms unwillingness to invest given the weak demand in the near-term future.

Andrew Smithers draws the distinction between financial and non-financial sector firms, and writes that despite the rise in total corporate cash flow, the balance sheets of the later have continued to deteriorate. The former make up a disproportionately large share of the corporatee profits. The large numbers of recent equity buy-backs have been also resposible for chanelling investments away from productive investments.

Jesper Koll makes the point that the higher savings is a function of the increased economic uncertainty. he writes, "the higher the cash reserve, the greater the chance of survival during a crisis. Cash is a very tangible cover against hidden liabilities arising from, say, sudden lawsuits, a banking crisis, a global recession, an earthquake, or the political regime changing to imposing stricter regulations. The greater the uncertainty, the greater the value of cash holdings."

Viral Acharya too argues that firms hoard cash in uncertain times, especially since the banking sector is itself in serious crisis. He writes, "The key observation is that firms generally did not hold these kinds of cash balances in previous downturns and that is largely because the banking sector was in good shape. When banks are well-capitalised, they can provide lines of credit to firms. That is a more efficient way for the economy to smooth cash-flow transfers in the cross-section of firms than each firm hoarding large quantities of cash. But firms have substituted away from lines of credit towards cash. This is partly demand as banks are not as strong as they were in previous downturns and risk right now is more aggregate in nature (so less opportunity to smooth across firms, which is the primary benefit of lines of credit). But it is also partly supply driven in that many banks did become under-capitalised and are still deleveraging.

In other words, firms hoard cash "due to the rise in aggregate uncertainty, the quantity of insurance provision in the economy has gone down, and the weak health of the primary providers of liquidity insurance—the banks—has made things worse. This primarily explains why firms are holding more cash and self-insuring."

Update 1 (18/7/2010)
Comparison of changes in number of jobs and corporate profits explains the aforementioned arguement. 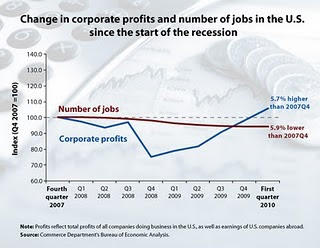 Update 2 (27/7/2010)
Richard Koo makes the point that corporate sector is ploughing its profits back to repay debts and repair their battered balance sheets. He writes,

"The US today is suffering from a balance sheet recession, a very rare ailment which happens only after the bursting of a nationwide debt-financed asset price bubble. In this type of recession, the private sector is minimising debt instead of maximising profits because the collapse in asset prices left its balance sheets in a serious state of excess liability and in urgent need of repair. When the private sector is deleveraging even with zero interest rates, the economy enters a deflationary spiral as it loses aggregate demand equal to the sum of unborrowed savings and debt-repayments every year. If left unattended, the economy will continue to contract until either private sector balance sheets are repaired, or the private sector has become too poor to save any money (=depression). The last time this deflationary spiral was allowed to materialize was during the Great Depression in the US...

When the deficit hawks manage to remove the fiscal stimulus while the private sector is still deleveraging, the economy collapses and re-enters the deflationary spiral. That weakness, in turn, prompts another fiscal stimulus, only to see it removed again by the deficit hawks once the economy stabilises. This unfortunate cycle can go on for years if the experience of post-1990 Japan is any guide. The net result is that the economy remains in the doldrums for years, and many unemployed workers will never find jobs in what appears to be structural unemployment even though there is nothing structural about their predicament. Japan took 15 years to come out of its balance sheet recession because of this unfortunate cycle where the necessary medicine was applied only intermittently."

More evidence from this Times story about corporate bottom-lines surging (due to aggressive cost-cutting) even as top-lines have been falling or are stagnant. Corporates are evidently deferring investments and using the profits to repair their balance sheets.

Although the most recent downturn was far more severe, profit margins bottomed out at 5.9 percent in 2009 and quickly rebounded. By next year, analysts expect margins to hit 8.9 percent, a record high. Among the 175 companies in the S.& P. 500 that have reported earnings for the second quarter, revenues rose 6.9 percent on average while profits jumped 42.3 percent, according to Thomson Reuters.
Posted by Urbanomics at 5:33 AM

since firms are uncertain about the future they do not have an incentive to invest. also helps to be less dependent on the financial sector lending which is still tight atleast here in europe. also with capacity utilization levels at such low levels, its unlikel that there will be too much greenfield investment anytime soon.