Interesting (though already well-known) findings from a new Commonwealth Fund report which shows US as having the most expensive and least effective of health care systems. It finds that "despite having the most expensive health care system, the US ranks last overall compared to six other industrialized countries — Australia, Canada, Germany, the Netherlands, New Zealand, and the United Kingdom — on measures of health system performance in five areas: quality, efficiency, access to care, equity and the ability to lead long, healthy, productive lives".

The report finds that US lags behind in affordability, not having systems with incentives aligned to reward higher quality and greater value, inadequate investments in primary and preventive care, deficient use of information technology in health care, and wastage on administration costs and duplicative medical testing. 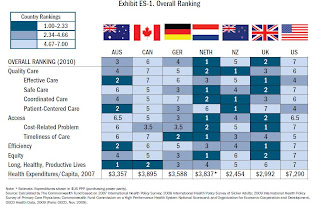 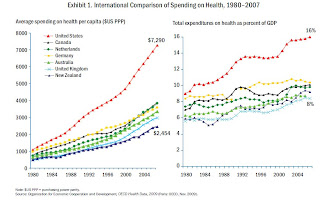 Netherlands, UK, and Australia had the three best performing health care systems, despite being amongst the lowest spenders. Incidentally, the first two who are in the top three in all the four functional indicators, have state-run, universal, flat-premium, and mandatory health insurance systems.

In Netherlands, long-term treatments, especially those that involve semi-permanent hospitalization, and also disability costs such as wheelchairs, are covered by a state-run mandatory insurance, while the regular (short-term) medical treatments are covered with a system of obligatory health insurance provided through private health insurance companies. Britain has the most complete example of a single-payer publicly funded health care system.

A system of risk equalization prevents the Dutch insurers from risk-rating their premiums and thereby plays a crucial role in reducing the incentives for risk avoidance common among insurers. European countries such as Netherlands, Belgium, Germany and Switzerland, which have flat-premiums, have a Risk Equalization Fund run by a government agency which assesses risks for individual policy holders and makes risk-adjusted premium subsidies to the insurers based on their respective patient risk-profiles.

A graphic that captures why the US health care system is a clear outlier among OECD economies. 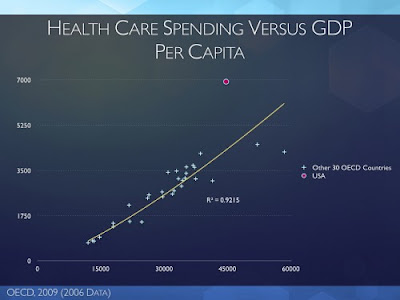 And the outcomes from this are dismal. 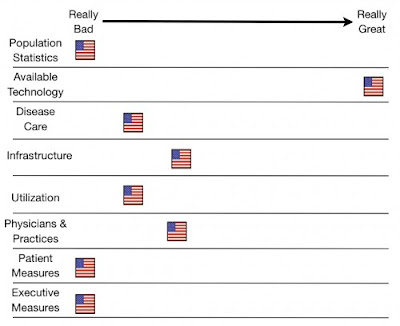 See also this on wait times, time spent with doctor etc
Posted by Urbanomics at 5:27 AM