Why duty cuts are a waste of money?

I just can't make sense of this fetish with lowering excise duties, sales tax, CENVAT etc. Industry groups have been aggressively lobbying for lower indirect taxes, on the grounds that it will stem the slow down in consumer demand. They are wrong and the government is also wrong to follow suit, more so given the limited fiscal space available. Scarce resources should not be allowed to go down the drain and should be deployed as to deliver the biggest possible bang for the buck.

The purpose of any fiscal stimulus measure is to boost aggregate demand, as directly as possible, by getting additional money into the hands of economic actors and then making them spend it immediately, thereby setting in motion a virtuous cycle of multipliers leading to economic growth. If in the process, the bottom lines of companies improves, as it will, so be it. But the reverse - increased corporate bottomlines will lead to more growth and thereby increased aggregate demand - is not always true.

Consider this example. All assumptions are made to simplify the scenario. A product Stimulant costs Rs 100, and it is taxed at 20%, amounting to Rs 20. Assume that Stimulant is sold at Rs 120 in the market (the actual market price, depends on the incidence of taxation, as shown in the graph, and is slightly less). Assume also that its manufacturing profit is Rs 25.

Now, as part of the fiscal stimulus package, the government reduces duties by half, thereby lowering taxes to 10%. Stimulant now gets priced anywhere between Rs 110-120 (the lower range indicates complete pass through, and the upper range is without pass through), depending upon various factors like its price elasticity of demand and other market specific reasons. Now assume that the market is balanced and competitive and the gains are equally shared between the manufacturer and the consumer. At a price of Rs 115, the producer profit (I) goes up by Rs 5 to Rs 30, consumer surplus (C) increases by Rs 5, and the government (G) loses Rs 10 in tax revenues.

Now assume that the manufacturer spends Rs 2 (even this is too liberal as we shall see) from out of the Rs 5 he gains on new investments. He uses the remaining Rs 3 to pay off his increased debt service burden or save it to build up reserves for the darker days ahead. Therefore (with all simplifying assumptions), on the net the economy gains Rs 2 + Rs 5 (assuming that the consumer spends all his incremental surplus), or Rs 7, while losing Rs 10 in revenues. Taking into account the multiplier and all, this is likely to be even less, since the consumer is not likely to spend all the Rs 5 saved by way of lower prices. We therefore have a sitaution where the economy gains less than a rupee for every rupee spent! Stimulating the sales of Stimulant is clearly not the way forward.

The figure below explains the movement of prices in a competitive market as the 20% tax is first imposed and then lowered to 10%. In more uncompetitive or distorted markets, as in India where price signals are not efficient and pass-through is constrained, the effective tax reduction is much lower, thereby keeping the consumer prices higher than expected. The proportion in which the tax gets distributed between the consumer and the supplier depends on the respective elasticities of demand or slopes of the curves. If price elasticity of demand is higher, as is the case for essentials and those with no substitutes, the incidence of the tax burden is higher on the consumers. 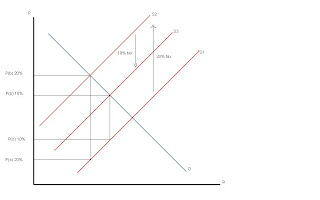 And on top of all these, duty cuts are difficult to roll back. The corporate lobby groups will ensure that these cuts end up being permanent. We therefore end up with back door corporate welfare. The government will have to make up the lost revenues by taxing elsewhere.

Standard economic theory says that GDP is the sum of consumption (C), investment (I), government spending (G), and net exports (NX). In uncertain times, I will always remain subdued given the rational expectations that imposes psychological blocks on committing investments. The deep uncertainty surrounding the global economy makes investments even more difficult to commit. I can at best accelerate a growth process set in motion by government spending and private consumption!

C is an important driver of the economic engine in such times, especially in the Indian context now. The issue is how do we stimulate C? As the aforementioned illustration shows, tax cuts are an ineffective way to stimulate C. And recent experience with duty cuts on steel, drugs, and a variety of other products shows that the benefits of duty cuts rarely ever gets passed on to the consumer and even when passed on, the share is disproportionately lower.

A more effective way to encourage consumption of say automobiles, consumer durables, and homes, is by offering more direct assistance like temporarily, say for three months, lowering interest rates on hire purchase schemes for them. Banks can be incentivized to lower rates on such lending by lowering provisioning requirements on loans made to these sectors anf offering guranatees etc, conditional on their actually lowering rates. Such incentives should be for a limited period of say, three months, so as to force consumers out into the market.

Similarly, fiscal support to prop up exports too may achieve little. The Government announced the extension of a 2% interest subsidy till September 30, on interest on pre-shipment and post-shipment credit for employment-oriented sector exports such as textiles, carpets, leather, gems and jewellery, marine products and other small and medium enterprises. In a depressed global economy, exports have declined because consumers outside have lost their apetite for the product. In such cicumstances, no amount of props, especially small token interventions like interest subsidy, can help Indian exporters increase sales. Such fiscal support then clearly becomes a handout to the specific exporter.

In view of all the aforementioned, direct government spending, G, is clearly the most effective way to spend scarce resources to deliver the biggest bankg for the buck. By bringing out the idle resources and excess capacity, both of which are growing, to use, the government spending will stimulate the economy as no other intervention can.

Update 1
And, predictably, the government has made duty cuts the center-piece of its third round of fiscal stimulus, the so-called election stimulus! The cost, Rs 30,000 Cr in revenues foregone. Will somebody, three months down the line, calculate how much of this has been passed down to the consumers? 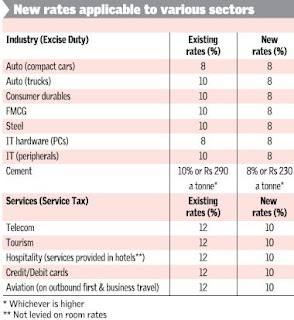 As Businessline says, in any case, these cuts are just a drop in the ocean, too little to make any impact on the consumer's expectations.
Posted by Urbanomics at 5:22 AM

I do not completely agree with your assertion on excise duty cuts there... let us look at it this way... the duties were being cut anyways over the last few years and the share of direct taxes growing in the total tax collections... thus, I see the cuts are only pre-empting what has been the trend and what was going to come maybe more slowly going forward (in the absence of a downturn)... also, I may need to look harder at your economic theory and graphs but the first principals of economics tells me that consumption slowdown (autos is a good example in India) is the key problem in India... ie, there is oversupply in the market and not enough demand... the theory of tax incidence, from first principals, implies that the incidence of tax is higher towards the party which has less power... clearly, the suppliers and producers have lower power right now (higher supply) and consumers has a higher power (low demand)... thus, the tax cuts, in first principals, will be largely passed on through to consumers... Think about this... I will also take a closer look at your PoV again... AcK

Thanks AcK
The issue here is not about the merits of lowering indirect taxes. The central issue here is - given the limited fiscal space available, is cutting taxes, with its resultant reduction in revenues (especially important now), the most efficinet alternative. In other words, among the different stimulus alternatives, does cutting taxes deliver one of the largest bang for the buck in boosting aggregate demand? I think not.

There are two dimensions to the incidence of tax debate

1. In bleak economic times, as is the case now, rational expectations dictate that consumers will cut back on spending. It generally would require a large enough reduction in price to overcome these expectations and get consumers back to the market.

Now, consumer durables, especially in price sensitive markets like India, exhibit high price elasticity of demand. This means that the effect of tax reduction is smaller on the consumers. This can be also illustrated by tweaking the slope of the D-curve in the graph.

Taking both the two aforementioned points together, I am inclined to believe that tax cuts while adding to corporate bottom lines, may not get consumers to spend more.

More academically, the actual incidence on tax cuts, will depend on the relative elasticites of supply and demand for the product in question. I trawled the Net, but could not come across any research article on this, with specific reference to the Indian context.