Obama budget gets thumbs up!

Refreshingly enough, in an age when cutting taxes, during both good times and bad times, has become the norm, President Obama has gone against conventional wisdom for nearly three decades, despite the economic recession, and proposed raising taxes on the rich and lowering it for the poor in his first budget. Commentators like Paul Krugman and Robert Reich have hailed this and the proposed changes in health care (by reducing the wastefully high insurance premiums and medicare costs) and education (increasing federal financial aid and simplifying the myriad of aid programs) as laying the foundation for reducing inequality after three decades of widening disparities.

The CBO has estimated (full site here) that over the last three decades, the pre-tax incomes of the wealthiest households have risen far more than they have for other households, while the tax rates for top earners have fallen more than they have for others. As a result, the average post-tax income of the top 1 percent of households has jumped by roughly $1 million since 1979, adjusted for inflation, to $1.4 million. Pay for most families has risen only slightly faster than inflation. Lawrence Summers had likened this to each family in the bottom 80% of the income distribution effectively sending a $10,000 check, every year, to the top 1% of earners.

The top two federal income tax brackets would rise to 36% and 39.6% from 33% and 35%, respectively. The budget proposes imposing the stadard income tax rate of 39.6% on those who work for hedge funds or private equity firms and were paying only a 15% capital gains tax rate on much of the money they take home. But all the tax proposals would start from 2011-12 only.

However, the tax measures and spending proposals have sent the budget deficit soaring to stratospheric levels, and is estimated to touch an unprecedented $1.6 trillion for 2009-10. 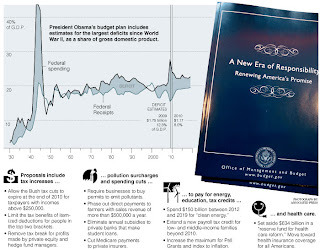 And as the figure below indicates, the propsects for future does not appear bright without substantial tax increases and spending cuts looming large. 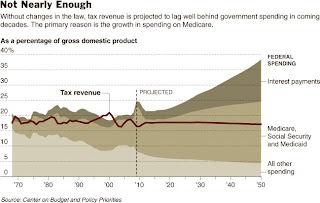 Update 1
The forecasts on GDP growth and unemployment made in the budget are much more optimistic than those of private agencies and stress test worst case scenarios. The last quarter forecasts on GDP contraction by a record 6.2% only adds to the woes.

More on the taxation proposals here.

Update 1
Defense and international security, social security, and medicare and medicaid take up 62% of the US budget spending (or here). 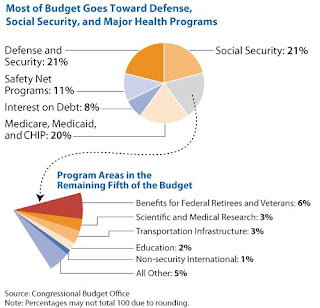 Update 2
See also this for more graphics.
Posted by Urbanomics at 6:12 AM

Email ThisBlogThis!Share to TwitterShare to FacebookShare to Pinterest
Labels: Taxation, US Economy

Consider that the bloggo boy here misses the point of how much money the top % are paying. Let's review. This is what one trillion dollars looks like - $1,000,000,000,000. no human, corporation, or McDonald's has ever achieved that number cumulatively. Now multiply it by 3, but then it gets bigger after a few years. This is the best scam ever. You proponents of this plan will pay for the rest of your life and all of your decendants lives. tax rates will quell you.

All bloggers should at least reach the age of thirty before they are allowed to speak out on this. Hope you kept your books to burn and keep warm.