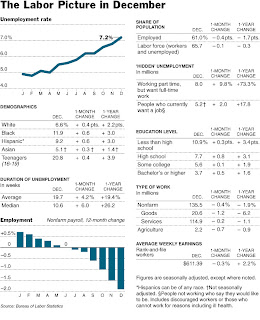 The unemployment figures tell only a part of the story as more Americans than ever are working fewer hours or resorting to part-time jobs. It doesn’t count people who have given up looking for work or those working part-time even though they want full-time work. The number of people working part-time rose to a seasonally adjusted 8 million in December from 7.3 million a month earlier, and the average length of a workweek for workers in nonmanagement positions fell to 33.3 hours in December from 33.5 hours a month earlier. As is typical during a recession, employers are cutting costs mostly by laying off workers and reducing the hours of their remaining workers, rather than cutting workers’ pay rates.

However, the worse may be yet to come. In contrast to the present recession, which started in December 2007, which has led to increase in unemployed by just 1.9% till date, the 1974-75 recession saw jobs decline by 2.7% and the 1981-82 saw a drop of 3.1%. But the intensity of job losses over the last quarter has been unprecedented - 1.531 million jobs were lost in the last three months and 1.9 million in the last four months.

Mostly Economics draws attention to research by the St. Louis Fed, which claims that "the current recession actually looks relatively mild, so far, when we look at the decline in industrial production". It compares the data from industrial production and change in non-farm payrolls (a measure for employment), for the past 10 recessions with the present recession and finds that both would have to worsen much more to compare with the worst numbers achieved in past 10 recessions.

Email ThisBlogThis!Share to TwitterShare to FacebookShare to Pinterest
Labels: Unemployment, US Economy