NYT draws attention to a new NBER working paper by Thomas Philippon and Ariell Reshef, that used detailed information about wages, education and occupations to shed light on the evolution of the U.S. financial sector over the past century, and found that financial workers are hugely overpaid.

Their findings include that "financial jobs were relatively skill intensive, complex, and highly paid until the 1930s and after the 1980s, but not in the interim period (the skill intensity and the complexity of jobs in the financial sector relative to the nonfarm private sector exhibit a U-shape from 1909 to 2006); financial deregulation and corporate finance activities linked to IPOs and credit risk increase the demand for skills in financial jobs while computers and information technology play a more limited role; and that wages in finance were excessively high around 1930 and from the mid 1990s until 2006".

They estimated that though the changes in the relative wage of finance employees is partially the result of an "efficient market response to a change in the economic environment", "rents accounted for 30% to 50% of the wage differential between the financial sector and the rest of the private sector". These rents, which measures the excess payments made, largely explains the flow of talent into the financial sector. 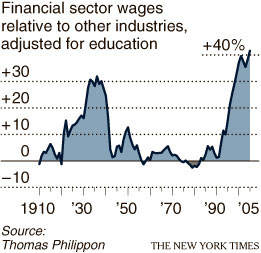 They draw attention to a less discussed dimension to regulatory failure to anticipate and prevent these crises - the absence of the required quality of human capital within regulatory institutions needed to keep up with, understand, and effectively regulate the innovations in the financial industry. They claim that given
the "wage premia" offered by private financial institutions, it is impossible for regulators to attract and retain highly-skilled financial workers. So one immediate regulatory recommendation would appear to be to offer the sector-compatible salaries to regulators, atleast those at the cutting edge.

They also claim that "a good chunk of (financial market) innovation has to do with tax and regulation arbitrage. That is really a waste for the society".

Update 1
Maureen Dowd has this stinging evisceration of the habits of the Wall Street bankers. NYT points attention to the fact that despite all the turmoil around them, financial institutions based in New York alone, including many who accepted tax payer financed bailout assistance, paid out $18.4 bn in bonuses for 2008, more than even 2004 and the sixth largest ever. The most shocking was Merrill Lynch's $4 bn bonus payout, even as the failing firm was up for sale and being bought by Bank of America. Joe Nocera has this to say on bonuses.

Update 2
Thomas Philippon has this article in the Vox, elucidating the same views as above.
Posted by Urbanomics at 1:10 AM