Dynamics of the growth of cities

Edward Glaeser draws attention to how New York (despite its cold climate and exit of manufacturing jobs to the sun-belt) has managed to survive (atleast till now, and relative to other cities) not only the ongoing recession, but also previous downturns. Even as eight of the largest ten American cities lost more than 20% of their populations in the 1950-2000 period, New York (along with Los Angeles) managed to buck the trend and grow, especially after the 1970s.

Prof Glaeser attributes this trend to the city's dominance in financial and business services, which in turn has been sustained by its amazing concentration of talent, thanks to the extreme population density levels. In many respects, skills and their concentration have become the critical determinants of a city's success in a globalized knowledge economy.

New York's growth is a classic example of how geographic determinism (natural advantages) initially, and then agglomeration (reduces transportation and transaction costs) and localization economies (concentration of specific economic activities and skilled labour), and network effects ("you get smart by hanging around smart people"!) have helped shape the destinies of the great cities of the world. Boston is another example of how cities have continuously reinvented itself over the years, moving from one specialization to another, in response to crisis and declines.

Update 1
NYT has this analysis of the impact of the crisis on New York city, and an excellent interactive graphic on the same. The prospect is bleak. 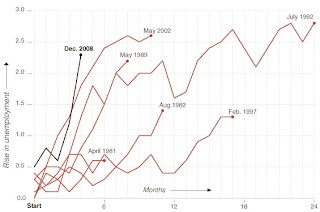 Update 2
NYT has this excellent article outlining the challenges facing New York city after the crisis.
Posted by Urbanomics at 5:57 AM