Harish Damodaran coined a nice term to describe a perceived paradigm shift in India's agriculture landscape - a shift from the "age of scarcity" of farm products, which spawned a labyrinth of regulatory and subsidy policies, to an "age of surplus" which demands a new set of policies. The critical change has been two-fold, both an absolute increase in production as well as the sharply increased elasticity of supply response to price changes. It has predictably triggered a series of articles. A summary is here.

TN Ninan is the latest to weigh in,

The country produces more food than it can consume: More rice, more sugar, more milk, and frequently more tomatoes, onions and potatoes. There are 68 million tonnes of wheat and rice in stock, more than twice what buffer stocking norms require. Milk production has been growing at four times the rate of population growth. That’s true of potatoes too, whose production has increased by 80 per cent in a decade, while the population has grown by less than 20 per cent. Sugar output this year is expected to be 32 million tonnes when consumption usually is 25 million tonnes. The result is that you have farmers pouring tanker-loads of surplus milk down highways in protest at low prices (this in the lean summer season, when milk output falls). Or leaving unwanted potatoes in cold stores; the store owners then dump thousands of tonnes of the stuff out in the open, to rot.

Ashok Gulati adds a new dimension to the debate arguing that contrary to the conventional wisdom, it is farmers who subsidise consumers. He points to a newly published OECD-ICRIER study on India's agriculture.

The report draws on a global standard, Producer Support Estimates (PSEs) and Consumer Support Estimates (CSEs), to compare the terms of trade between producers (farmers) and consumers. The PSE compares the price received by farmers to the globally benchmarked output price for that crop, by separating out the various positive transfers (input subsidies etc) and negative transfers (regulations like export restrictions, price controls etc) received by farmers. A positive PSE ( a net subsidy) indicates consumer (and taxpayers) subsidise the farmers, whereas a negative PSE indicates the other way (an implicit tax). 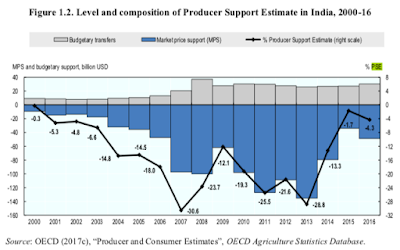 The negative market price support indicates that prices received by farmers are lower than those prevailing on international markets for the same commodity, and the transfers do not make up for the shortfall.

Interestingly, on a comparative perspective, India is among the tiny minority of just three countries which penalises its farmers. They lose out on atleast 6% of their gross farm receipts due to all the agriculture related policies. 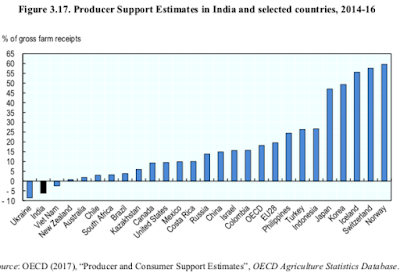 And the corollary, the CSE shows exactly the inverse, with Indian consumers being the largest recipients of subsidy among all the major economies. This amounts to 25% of their consumption expenditure, against a negative CSE of 8% for OECD countries. 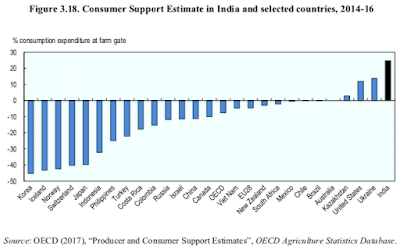 The conventional wisdom would have it that India's agriculture and its farmers are heavily subsidised and therefore inefficient. This is clearly not borne out by data.

As to the sector itself, a combination of support to individual farmers (PSE) and policies from infrastructure investments, R&D, training, standards and inspections, marketing and promotion, and public stockholding (GSSE), captures the total support or the Total Support Estimates (TSEs). GSSE broadly captures the budgetary support to agriculture sector as a whole. This too paints a similar picture, though has been growing in recent years. 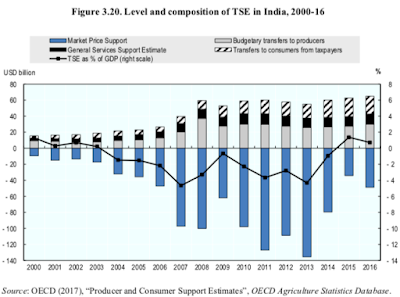 On a global comparative perspective, India is among the countries which offers the least support to agriculture sector. 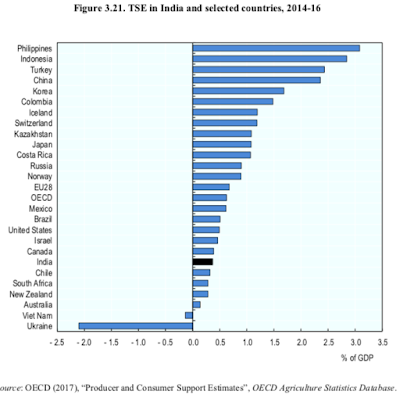 This should be a matter of concern,

The GSSE can be expressed as a share of the sum of the budgetary transfers in PSE (mainly input subsidies) and the GSSE. This share rose from an average of 29% in 2000-02 to a high of 38% in 2005, before declining to an average of 30% in 2014-16. The decline seen in the last decade in the share of budgetary support that is provided as general services to the agricultural sector as a whole rather than to individual producers is of concern since it represents a move away from the less distorting forms of producer support expenditure. The kind of support provided through GSSE measures is also the kind that most effectively builds resilience and sustainability in the agriculture sector, in contrast to ongoing expenditures on input subsidies and, in some countries, on price support.

In simple terms, while investments in agriculture public goods have been declining compared to subsidies to farmers.

The report has several other insights including a series of recommendations and looks a good read.  I have not read it, except glance through. One of the things that stuck me is this graphic about the institutional architecture of agriculture policy making in India. 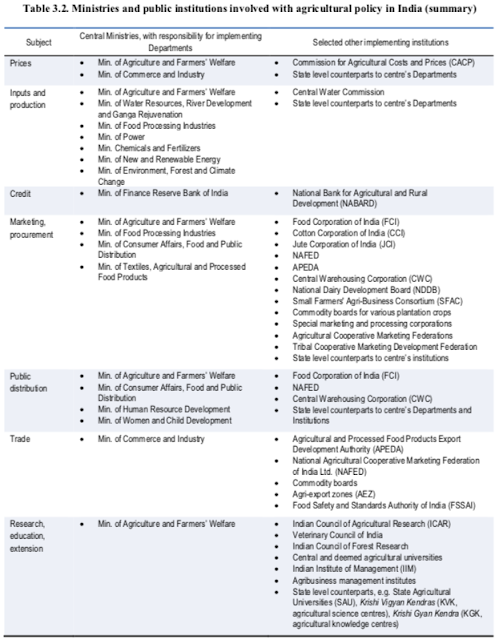 This is a bewildering array, with all the co-ordination challenges and possible loss of synergies. A clear area for administrative reform.

Some figures here and here about agriculture in India.
Posted by Urbanomics at 2:22 AM