End of central banking as we have known it?

Greg Ip has a very nice article on the emerging world of constrained central banking and monetary policy.

Since World War II, every recovery was ushered in with lower rates as the Fed moved to stimulate growth. Every recession was preceded by higher interest rates as the Fed sought to contain inflation. But with interest rates now stuck around zero, central banks are left without their principal lever over the business cycle... The Fed typically cuts short-term interest rates by 5 percentage points in a recession... yet that is impossible now with rates below 2%. Workers, companies, investors and politicians might need to prepare for a world where the business cycle rises and falls largely without the influence of central banks... In November, Fed Chairman Jerome Powell warned Congress that “the new normal now is lower interest rates, lower inflation, probably lower growth…all over the world.”... Central banks are calling on elected officials to employ taxes, spending and deficits to combat recessions. “It’s high time I think for fiscal policy to take charge,” Mario Draghi said in September, shortly before stepping down as ECB president.

This description of the causes of business cycles,

The causes of business cycles were diverse, Wesley Clair Mitchell, an NBER founder, wrote in 1927. They included “the weather, the uncertainty which beclouds all plans that stretch into the future, the emotional aberrations to which business decisions are subject, the innovations characteristic of modern society, the ‘progressive’ character of our age, the magnitude of savings, the construction of industrial equipment, ‘generalized overproduction,’ the operations of banks, the flow of money incomes, and the conduct of business for profits.” He didn’t mention monetary or fiscal policy because, for all practical purposes, they didn’t exist. Until 1913, the U.S. hadn’t had a central bank, except for two brief periods. As for fiscal policy, U.S. federal spending and taxation were too small to matter.

On the nature of business cycles,

From 1854 to 1913, the U.S. had 15 recessions, according to the National Bureau of Economic Research, the academic research group that dates business cycles. Many were severe. One slump lasted from 1873 to 1879, and some historians argue it lingered until 1896... U.S. recessions were more frequent before the Federal Reserve took control over interest rates, using them as a lever to slow inflation or boost the economy.

On the origins of monetary and fiscal policies,

When central banks were established, they didn’t engage in monetary policy, which means adjusting interest rates to counter recession or rein in inflation. Many countries were on the gold standard which, by tying the supply of currency to the stock of gold, prevented sustained inflation. The Fed was established in 1913 to act as lender of last resort, supplying funds to commercial banks that were short of cash, not to manage inflation or unemployment. Not until the Great Depression did that change. In 1933, Franklin D. Roosevelt took the U.S. off the gold standard, giving the Fed much more discretion over interest rates and the money supply. Two years later, Congress centralized Fed decision-making in Washington, better equipping it to manage the broader economy... John Maynard Keynes... showed how individuals and firms, acting rationally, could together spend too little to keep everyone employed. In those circumstances, monetary or fiscal policy could generate more demand for a nation’s goods and services, Mr. Keynes argued... The Employment Act of 1946 committed the U.S. to the idea of using fiscal and monetary policy to maintain full employment and low rates of inflation.

This is a nice summary of the history of monetary policy,

The next quarter-century followed a textbook script. In postwar America, rapid economic growth and falling unemployment yielded rising inflation. The Fed responded by raising interest rates, reducing investment in buildings, equipment and houses. The economy would slide into recession, and inflation would fall. The Fed then lowered interest rates, investment would recover, and growth would resume. The textbook model began to fray at the end of the 1960s. Economists thought low interest rates and budget deficits could permanently reduce unemployment in exchange for only a modest uptick in inflation. Instead, inflation accelerated, and the Fed induced several deep and painful recessions to get it back down.

By the late 1990s, new challenges emerged. One was at first a good thing. Inflation became both low and unusually stable, barely fluctuating in response to economic growth and unemployment. The second change was less beneficial. Regular prices were more stable, but asset prices became less so. The recessions of 2001 and 2008 weren’t caused by the Fed raising rates. They resulted from a boom and bust in asset prices, first in technology stocks, then in house prices and mortgage debt.

After the last bust, the Fed kept interest rates near zero from 2008 until 2015. The central bank also purchased government bonds with newly created money—a new monetary tool dubbed quantitative easing—to push down long-term interest rates. Despite such aggressive stimulus, economic growth has been slow. Unemployment has fallen to a 50-year low, but inflation has persistently run below the 2% target the Fed set. A similar situation prevails abroad. In Japan, Britain and Germany, unemployment is down to historic lows. But despite short-and long-term interest rates near and sometimes below zero, growth has been muted. Since 2009, inflation has averaged 0.3% in Japan and 1.3% in the eurozone. The textbook model of monetary policy is barely operating, and economists have spent the last decade puzzling why. 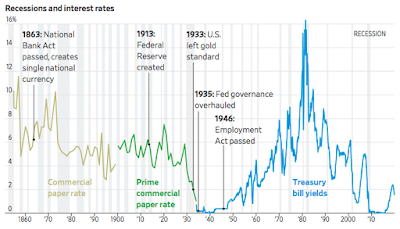 This about the asymmetric nature of monetary policy effectiveness,

A central bank can always raise rates enough to slow growth in pursuit of lower inflation; but it can’t always lower them enough to ensure faster growth and higher inflation.

On why interest rates transmission in the US may be weaker today,

The economy has changed in ways that weaken its response to interest-rate cuts, they wrote. The economy’s two most interest-sensitive sectors, durable goods manufacturing, such as autos, and construction, fell to 10% of national output in 2018 from 20% in 1967, in part because America’s aging population spends less on houses and cars. Over the same period, financial and professional services, education and health care, all far less interest sensitive, grew to 47% from 26%... the response of employment to interest rates has fallen by a third, meaning it is harder for the Fed to generate a boom. 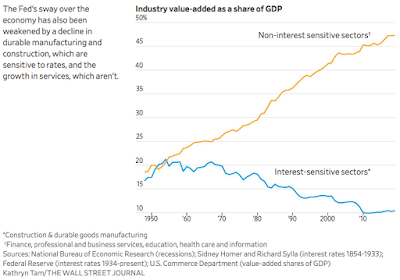 My one quibble with this narrative is on an issue of attribution. How do we know that monetary policy was responsible for all these trends being attributed to it? How much role did central banking play in ushering in the Great Moderation and sustaining it for nearly a quarter century? How do we separate monetary policy's impact from the numerous other forces that converged at the same time? How do we know that the quantitative easing monetary policy since the crisis has been more beneficial than costly? In fact, how do we refute the criticism that the extended monetary accommodation has entrenched the existing elite power, widened economic inequality, and ripened popular discontent? In other words, how can we claim that the positives associated with monetary policy are causation and not mere correlation?
Posted by Urbanomics at 4:06 AM