Is the tide turning on PPPs?

It is no hyperbole to claim that the tide on the unqualified embrace of PPPs has turned. The only thing surprising for me is that the likes of FT are leading the charge. Interestingly, the most intense debate on the issue is happening in UK, one of the countries which was at the forefront of the privatisation movement. I have blogged numerous times that PPPs are costlier, invariably run renegotiation risks, and suffer from governance failings, all of which make them extremely controversial.

The latest example of governance failings come from London's £4.2 billion 15 mile long "super sewer" project, which has been accused of profiteering at the expense of tax payers. The project, being developed by Thames Water through a very complicated project structure and with several government guarantees, is an over-flow super-sewer linking the 57 over-flow pipes across London. This sewer will serve as a catchment for sewerage water which prevent overflow into Thames when it rains heavily and the treatment system cannot cope up with the inflows. 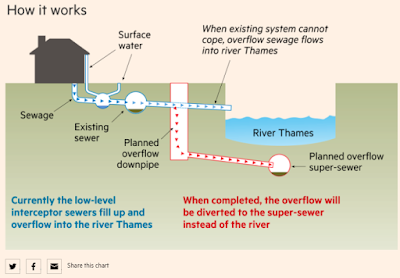 Of the £4.2 bn, £1.4 bn is being provided as equity by Thames Water, with the investments coming from investors through a very complicated company structure, 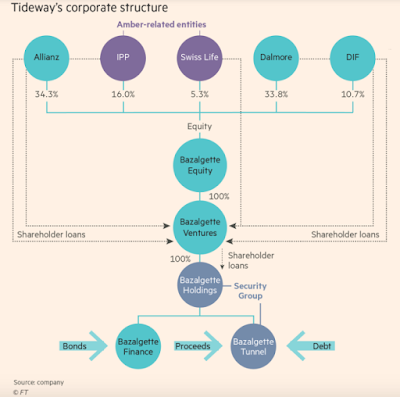 Thames Water paid £157m in dividends to its offshore investors in the year to March 31 2017 and currently carries £11bn of debt... The European Investment Bank has issued a £700m, 35-year loan and the balance is made up of a mix of bank debt and bonds. As of March 31 the investors had paid in £370m in equity and had bought a further £529m of subordinated debt — commonly used to reduce tax liabilities — receiving an interest rate of 8 per cent... the government has agreed to be the backstop for the project, minimising any risk. According to the terms of the contract, if the cost overruns exceed 30 per cent, the government could be forced to step in to provide additional equity to the Bazalgette consortium or the investors will be allowed to discontinue the project and receive compensation... Thames Water’s 15m customers, who will pay for the project through higher water bills — an increase of £12 to £15 a year currently, rising to £20 to £25 by the mid-2020s — paid £33m to Bazalgette last year, which used the money partly to cover the interest payments on the debt...

Thames Water has a complicated offshore holding structure and so does Bazalgette, which is owned by Bazelgette Holdings Ltd, which in turn is owned by Bazelgette Ventures Ltd, which is owned by a holding company, Bazelgette Equity Ltd... Meanwhile, Bazalgette paid £2.2m in directors’ salaries in the year to March. Andy Mitchell, chief executive, saw his base salary almost double in the past year to £425,000. He also received a bonus of 66 per cent of his salary, or £281,000, taking his total package to £729,000. These rewards were made even though the management of the project has been outsourced to Amey OWR for system integration and Ch2MHill, which is project managing the three construction consortiums. All the management of the tunnel is doing is co-ordinating some contractors... The tunnel has also provided rich pickings for dozens of law firms, including Linklaters, Herbert Smith Freehills, Ashurst and Norton Rose Fulbright. UBS — which also advised on the sale of High-Speed One, Eurostar, Royal Mail and the Green Investment bank — was an adviser on the project, and the chief financial officer of Tideway was formerly a UBS employee.

FT has this balance sheet on UK's water privatisation,

Over the past decade, the nine main English water companies have made £18.8bn of post-tax profits in aggregate, according to a study by Greenwich University. Of this, £18.1bn has been paid out as dividends. Consequently, almost all capital expenditure has been financed by adding to the companies’ debt piles. Collectively these now stand at a towering £42bn... Ofwat, the regulator, permits it because it takes no interest in the companies’ capital structures as long as they retain investment grade ratings... The result has been very juicy for private equity investors. Macquarie, for instance, received returns of between 15.9 per cent and 19 per cent during the 11 years it controlled Thames Water, according to Martin Blaiklock, an infrastructure consultant. According to him, that is twice what an investor might expect from a private utility. But it is harder to see what is in it for the customers, who have to pay the mounting debt interest. Their bills are, in effect, rising to fund the massive shareholder payouts. The utilities insist they are putting in investment. But it all adds up to some very costly infrastructure. Those annual interest bills might be £500m lower if the companies were still in state ownership, according to the Greenwich researchers. Customers also would not have to finance the £1.8bn in dividends. Bundle it all together and that could knock £100 off a £400 annual water bill.

And Thames Water itself,


In the decade between 2006 and 2016, Macquarie paid itself and fellow investors £1.6bn in dividends, while Thames was loaded with £10.6bn of debt, ran up a £260m pension deficit and paid no UK corporation tax.

Posted by Urbanomics at 2:39 AM