Indian Express reports that 18 months after its establishment in December 2015, the National Infrastructure Investment Fund (NIIF), which was to have sourced foreign capital for infrastructure projects, is still searching for both its first project and its first private, domestic or foreign, investor.

The NIIF was registered with SEBI as an infrastructure fund, a Category II Alternate Investment Fund, to raise a corpus of Rs 40,000 Cr, with 51% coming from private sources, mainly pension, insurance, and sovereign wealth funds. It was the government's logical and technically correct response to the trend in infrastructure financing.

But progress so far has been minimal. IE has a summary of the story so far,

It is too early to pass any judgement on NIIF, especially given the difficulty of mobilising such resources, and even more so as a completely new institution. Why would domestic and international institutional investors and other limited partners prefer to give their money to NIIF over other more established infrastructure funds? Maybe it should leverage the advantages of its government capital and also differentiate itself by being able to better identify infrastructure investment opportunities in India.

The most immediate opportunity in this regard for NIIF may be to raise resources to purchase some of the completed or close to completion stressed assets in steel and power sectors that are likely to be resolved and auctioned off in the months ahead. For example, NIIF could immediately explore options of floating two funds, India Steel and Power Funds, to raise capital for investing in these sectors.

I also have three observations that relate to the broad issue of infrastructure financing for countries like India.

1. I have blogged here in detail laying down the evidence that inflows from such funds are unlikely to be significant. In fact, the annual dry powder available among all funds - infrastructure debt and equity funds, project finance bonds, and alternate investors like pension funds and insurers - for all developing countries (excluding China and the biggest Latin American countries), including India, are likely to be no more than a few billion dollars.

Consider the numbers from the latest Preqin Report on global unlisted infrastructure fund raising for Q1 2017. In the year from Q1 2016, N America and Europe focused funds formed 84% of the total funds raised. All of Asia attracted just $8.7 bn, or 9.4%, the vast majority of which likely focused on China and E Asia. It is no different the coming year too. Of the 168 funds seeking to raise $102 bn funds, as on start of Q2 2017, an even smaller 7.4% are Asia focused funds. In fact, the investible dry powder available with all unlisted funds for all of Asia, as on March 2017, was just $16 bn. The vast majority of this would be sucked up by Japan and China, and few SE Asian projects, leaving just a couple of billion or so for countries like India. 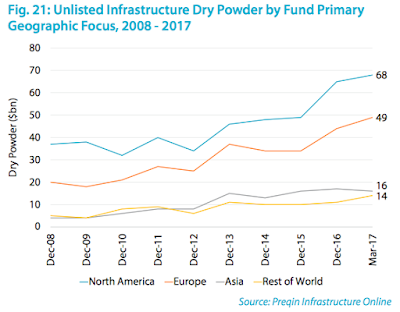 In general, unlisted funds are the predominant channel for institutional investors to invest in the infrastructure market. One can add a few hundreds of millions being deployed directly by some of the largest pension funds, especially those from Canada. I shall not at all be surprised if the largest share of such investment in India has gone into financing solar and renewables projects.

In the circumstances, the ability of an entity like NIIF to use its expected public funding of $3 bn to leverage foreign capital may be limited.

2. Such unlisted funds, especially in emerging markets, are very unlikely to finance greenfield infrastructure utility projects with all their significant and non-diversifiable construction risks. Their preference is more likely to be for commissioned assets, where construction risks are off-loaded, with attractions of stable returns.

This may be a very good opportunity to securitise some of the functional infrastructure assets like tolled roads, power projects, steel plants and so on.

3. Apart from infrastructure funds, the other major financing option that gets vigorously advocated in mainstream discussions is the bond market. Again as I have blogged earlier here, this too does not hold out much promise. Non-financial corporate bond issuances have been very small markets across the world, except the US. Capital markets are unlikely to be a major financier of India's infrastructure investment needs.

The bulk of such investments across countries, both developed and developing, come from plain bank loans. It is also for this reason that a quick resolution of the banking sector loans assume great significance.
Posted by Urbanomics at 12:00 AM