1. India needs more of this type of market makers and peer-to-peer lending platforms which can credibly signal the credit-worthiness of borrowers by using non-conventional sources and strategies of credit assessments,


The financial tech startups are trying to evaluate credit risk using a wide variety of consumer data including the digital footprint of customers arising out of social networks, ecommerce, mobile usage and geo-location. For example, IndiaLends claims to capture alternative information points such as bank statement, utility data, social data and customer interaction with the website... Startups like IndiaLends do not lend money of their own. Using their technology platform, they connect consumers with banks and financial institutions which results in better rates for the borrowers and a reduction in overall default rates... where they differentiate... from the bank is in scientifically matching the right borrower profile with the most relevant lender and hence reducing inefficiencies that lead to lower loan approvals, higher interest rates and sub-optimal loan amounts.

2. The most obvious indicator of state capability weakness is the gross inadequacy of personnel in many critical public agencies. As against a global average of one policeman per 450 people, India's has one for 709 people, with the numbers being 1298 and 1282 for Bihar and UP respectively. 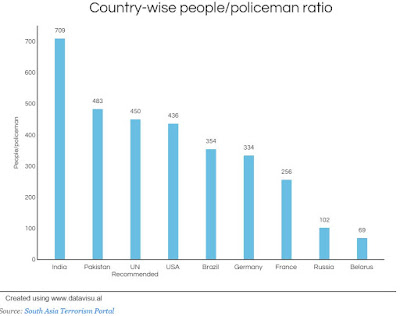 The problem here is that any discussion on increasing personnel strength gets conflated with the mistaken belief that the government is already too big and needs to be pruned down.

3. Ian Bremmer points to this map of the world would could well represent the beliefs of ISIS 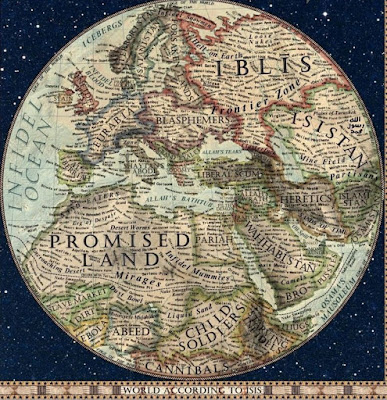 4. Economic Times has a story on the increasing use of robots among India's car manufacturers,


Robots have begun to take over an array of functions from humans at car plants in India. Volkswagen India has 123 robots at its Pune plant while Hyundai Motor India, the subsidiary of the Korean carmaker, has 400 robots at its factory in Chennai... The Ford Sanand plant actually has 453 robots in the shop floor, with up to 90 per cent of the work automated... The entire body shop, most of the paint shop and parts of the final assembly line in these plants are now automated. Robots are performing functions ranging from welding to foundry operations to laser applications.

But robots are not likely to displace humans any time in the foreseeable future,


Still, despite the many benefits, companies will not be in a hurry to replace labour simply because robots are costly. A robot does the work of three technical workers, but it typically costs between $3,00,000 and $4,00,000. In other words, automation is 10 times more expensive than manual labour


According to an a 2013 survey by Associated Chambers of Commerce and Industry of India (Assocham), titled "Business of Private Coaching Centres in India", the size of the private coaching sector was $23.7 billion, or Rs 1.41 lakh crore. The survey also predicted that by 2015, it would grow to $40 billion, or Rs 2.39 lakh crore. The survey had collected data from 5,000 students and parents across 10 cities. It revealed that 87 per cent of primary and 95 per cent of high school students in the major cities took private tutoring. This industry grew by 35 per cent in the previous six years.

6. Global corporate bond offerings have crossed $2 trillion for the fourth consecutive year on the back of continuing monetary accommodation and signals that the ECB may be willing to continue and expand the ongoing QE. 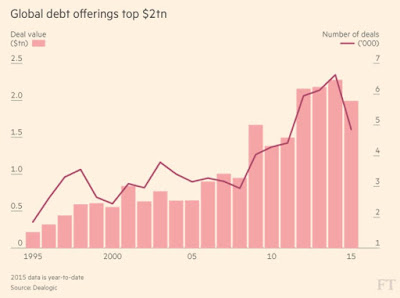 7. Roula Khalaf has a nice summary of the differences between Isis and Al Qaeda. This is interesting,


The Sahwa movement comprised a group of Iraqi tribesmen that collaborated with the US a decade ago to root out the Iraqi branch of al-Qaeda. That branch took its revenge: it eventually became the Islamic State of Iraq and the Levant, better known as Isis... Isis seems obsessed with al-Qaeda, from which it split in 2013 following disagreements over the goals of jihad in Syria. Since then Isis has distinguished itself from its parent through its savagery (there is no limit to the violence it is willing to inflict) and its move to create a caliphate in parts of Iraq and Syria.

8. Nice article in NYT on how Isis sustains itself - "they fight in the morning and they tax in the afternoon". The article describes how Isis is running the legitimate revenue collection operations of a regular government,


The better known of the Islamic State’s revenue sources — smuggling oil, plundering bank vaults, looting antiquities, ransoming kidnapped foreigners and drumming up donations from wealthy supporters in the Persian Gulf — have all helped make the group arguably the world’s richest militant organization. But as Western and Middle Eastern officials have gained a better understanding of the Islamic State’s finances over the past year, a broad consensus has emerged that its biggest source of cash appears to be the people it rules, and the businesses it controls...

(Isis) has set up a predatory and violent bureaucracy that wrings every last American dollar, Iraqi dinar and Syrian pound it can from those who live under its control or pass through its territory. Interviews... describe the group as exacting tolls and traffic tickets; rent for government buildings; utility bills for water and electricity; taxes on income, crops and cattle; and fines for smoking or wearing the wrong clothes. The earnings from these practices that mimic a traditional state total tens of millions of dollars a month, approaching $1 billion a year, according to some estimates by American and European officials. And that is a revenue stream that has so far proved largely impervious to sanctions and air raids...

In Raqqa, the Syrian city that is now the de facto capital of the Islamic State, a department called Diwan al-Khadamat, or the Office of Services, sends officials through the city markets to collect a cleaning tax — 2,500 to 5,000 Syrian pounds, or about $7 to $14, per month depending on the size of the shop. Residents go to collection points to pay their monthly electricity and water bills, 800 Syrian pounds, or roughly $2.50 for electricity and 400 pounds, about $1.20, for water. Another Islamic State department, the Diwan al-Rikaz, or the Office of Resources, oversees oil production and smuggling, the looting of antiquities and a long list of other businesses now controlled by the militants. It operates water-bottling and soft-drink plants, textile and furniture workshops, and mobile phone companies, as well as tile, cement and chemical factories, skimming revenues from all of them...

The group has taken over the collection of car-registration fees, and made students pay for textbooks. It has even fined people for driving with broken taillights, a practice that is nearly unheard-of on the unruly roads of the Middle East. Fines are also included in the punishments meted out for breaking the strict living rules imposed by the Islamic State.

In this context, the prevailing strategy to contain them, involving targeting their oil production and smuggling operations is unlikely to yield results,


Ultimately, though, many officials and experts said the Islamic State would probably be able to cover its costs even without oil revenue, and that so long as it controls large stretches of Iraq and Syria, including major cities, bankrupting the group would take a lot more than blowing up oil tankers. “These are all going to be little pinpricks into Islamic State financing unless you can take their revenue bases away from them, and that means the territory they control,” said Seth Jones, a terrorism expert at the RAND Corporation... the old strategy for stopping the flow of money to terrorist groups like Al Qaeda, which was largely based on cutting them off from donors in the Persian Gulf upon which they depend, does not apply to the Islamic State.

9. The $160 bn reverse takeover of US-based Pfizer (maker of Viagra) by the Dublin-based Allergan (maker of Botox), an investment company trading pharmaceuticals businesses, is classic tax-inversion. It enables Pfizer to use its accumulated overseas profits without incurring US tax liability, thereby saving atleast $21 bn in future tax liabilities. It also joins Burger King and Liberty Global as brands which have fled overseas to avoid tax payments.


Pharmaceuticals companies used to be research enterprises that discovered and developed drugs. Then they became marketing giants, skilled at selling as many blockbuster pills as possible. Lately, they have turned into mergers and acquisitions machines, buying and selling medicines invented by others. It is hard to view their evolution as progress... Instead of taking their chances by investing in drug discovery themselves, some wait until a smaller biopharmaceutical enterprise has done so and then try to buy the rights. It is less risky and uncertain for investors but it also tends to be extremely expensive. AbbVie, for example, paid $21bn for Pharmacyclics this year, largely to acquire a single blood cancer treatment.

In this case, Pfizer is buying up Botox!

10. Finally, the ECB has extended QE, but not by as much as anticipated. Apart from extending its 60 billion Euro a month bond buying program for another six months till March 2017 or "beyond" and purchase municipal bond in addition to government bonds, it has also lowered the deposit rate to minus 0.3 per cent. 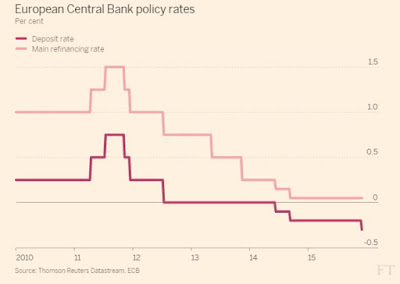 Wow, Pfizer is simply buying Botox. Beautiful explanation Sir! Also could it not be a case of killing all R&D competition in the age-defying drugs? Effectively by investing in Botox, Pfizer is making all of the $$ from Botox sales plus the tax issues you've raised.

Reminds of the criminal suit initiated by Dept. of Justice when there were mere talks of AA and U.S. Airways merger? Who would dare to be the regulator in this trans-atlantic tax evasive deal? Ireland has indeed been in the news of late for all the wrong reasons, not sure why. Would you care to explain Sir what's so awesome for the these U.S incorporations to do business with Eire?

This peer to peer lending is how so called indigenous banks worked in the past. It is sad that they were allowed to die and now we are all trying to discover it in a new form using technology..:-)