The revolving door and business-politics links

The conventional wisdom on business interests influencing policy making has been one of purchasing such influence through lobbying or outright bribery. However, there is growing evidence, from across the world, that business interests may be more directly integrated into the decision making process by a revolving door between business and politics.

Businessmen enter politics either by contesting elections, made easier by the fact that modern elections are extremely expensive, or be appointed to important posts. While the former may be the more commonplace way in developing countries, the latter may be the more likely entry point in developed countries.

In an excellent recently released study, Simon Luechinger and Christoph Moser use both quantitative and qualitative data to examine Senate-confirmed US Defense Department appointments of six Presidential administrations. Specifically, they observed the effect of these appointments on the stock market prices of the companies which were linked to the appointees. Given the importance of such connections in defense department, where procurements are important, they find,


According to the results, investors clearly expect firms to profit from their political connections. The one- and two-day average cumulative abnormal returns amount to 0.82% and 0.84%. These estimates are not driven by important observations, volatile stocks, or industry-wide developments, and placebo events yield no effects. Effects are larger for top government positions and less anticipated announcements, i.e., announcements for which the actual nominee was not rumoured to be the main candidate. Figure below displays the baseline results and the results for the less anticipated events together with the temporal pattern of average cumulative abnormal returns for the four trading weeks prior to and after the announcement day. 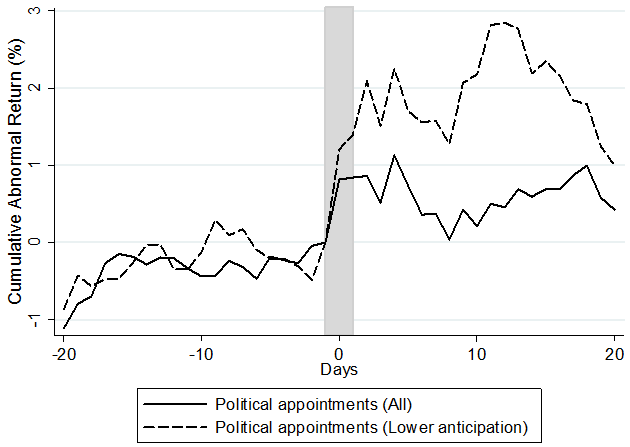 In India, links between business and politics has been more direct, with a large number of businessmen entering politics through elections and backdoor, through the Rajya Sabha. However, the trend of businessmen being appointed to important nominated posts are very small. It is just as well. The example of KV Kamath, who was once being considered for the post of RBI Governor, and who has since been continuously demanding lowering interest rates despite the embedded inflationary expectations, clearly revealing his entrenched preferences, does little to inspire any confidence.
Posted by Urbanomics at 10:56 AM