A nine member jury in San Jose, California has found Samsung guilty of infringing the design and user-interface patents of Apple and has awarded $1 bn in damages. Apple's claim was that Samsung had copied its touchscreen features such as “tap to focus in on a column of text, pinch to zoom into a picture of webpage”, “bounce back” scrolling, edge-to-edge sleek glass front, rounded corners, and the grid of colorful, round-cornered app icons.

Samsung has said that the patent ruling gives "one company a monopoly over rectangles with rounded corners" and described it as "a loss for the American consumer that will lead to fewer choices, less innovation, and potentially higher prices”. I am inclined to agree with Samsung on this. 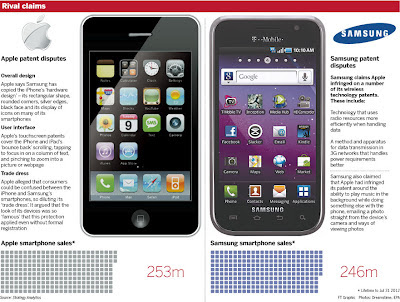 As the stakes in the smartphone market has gotten bigger, Apple has been committed to make life difficult, if possible eliminate, Google's Android operating system. In fact, it has already sought to block the sale of several Samsung devices in the US. This latest victory over Samsung has to be seen in this backdrop and it is certain to put device makers pursuing Android-based software wary of attracting litigation.

This issue spotlights attention on the debate about the utility of patents, especially of certain features and of long duration, in many sectors. Sebastian Mallaby points to a recent study by Michele Boldrin and David Levine who question the utility of patenting electronic technologies and argue that the best policy may be to not grant any patent at all. They contend that unlike pharmaceuticals, which require long-drawn and expensive clinical trials, technology innovators, especially those at the design end, incur far less expenses. Further, given the network effects associated with these technologies, they are amply rewarded by the first-mover advantage which confers considerable commercial opportunities. Apple's remarkable success with short-cycled product innovation, enough to make handsome profits, is proof enough for this.

As Mallaby writes, securing patents have become an end in itself,


By one count, in 2005, 41 companies claimed 8,000 patents associated with 3G communications technology. Other standards, such as MP3 music, are similarly surrounded by thickets of competing claims. Even a manufacturer that does its best to license the patents it uses may be accused of infringement... Some patents are kept deliberately low-profile in hopes that deep-pocketed companies will violate them unknowingly, at which point patent holders pounce. Last year US companies spent about $29bn fending off raids from “non-practising entities”, also known as patent trolls, litigators who own bundles of patents with no intention of using them to build products.

Further, far from dealing with technical issues of the technology standards of a phone, this patent ruling is confined to the so-called "touchy-feely" parts of the phone. As an FT article wrote,

In other words, Apple's patents are for being the first to adapt symbols from our universal language. Imagine what would have happened if patents were granted to the design of a square shaped box lap-top or to the generic design of a browser window or a clamshell mobile phone. Or if a patent is granted when someone comes up with a round-shaped laptop or mobile phone. At best, such patents only stunt the development of the sector. At worst, when seen in their total historical perspective, they appear farcical.
Posted by Urbanomics at 6:31 AM

Email ThisBlogThis!Share to TwitterShare to FacebookShare to Pinterest
Labels: Patents

Frivolous patents seem to be increasing a great deal. We need to address these issues in the patent laws.

When the products itself lives for a year, there does not seem to be much of a point in granting long term patents