Christina Romer is anguished about the fiscal policy debate,

"Policymakers and far too many economists seem to be arguing from ideology rather than evidence... the evidence is stronger than it has ever been that fiscal policy matters — that fiscal stimulus helps the economy add jobs, and that reducing the budget deficit lowers growth at least in the near term. And yet, this evidence does not seem to be getting through to the legislative process. That is unacceptable. We are never going to solve our problems if we can’t agree at least on the facts. Evidence-based policymaking is essential if we are ever going to triumph over this recession and deal with our long-run budget problems."

She writes about the inherent difficulty of estimating the impact of fiscal policy on people's consumption decisions because there are other things happening in the economy and other unanticipated factors which might influence the policy. She points to the omitted variable bias while illustrating the case with the early 2008 Bush tax cut. The contribution of this tax rebate to holding up household consumption spending was offset by the tumbling houseprices and resultant lowering of household wealth which in turn squeezed disposable incomes. In other words, the omitted variable bias skews our understanding of important relationships, nowhere more so than in our assessment of fiscal policy.

Prof Romer also points to tax cuts made when the economy is slipping into recession and tax increases in response to increased spending needs (like, say, war). In the former, unless tax cut was very large and for a sustained period, the outcome would still be weak growth - the tax cut would have only mitigated the adversity. In the later case, there is a behavioural sleight of hand - the impression gains ground that the tax increase caused increase in spending, whereas it was only a small contributor to an already rising spending.

In order to address the omitted variable bias, she and husband David Romer excluded from their empirical analysis the tax changes taken in response to economic conditions and confined their dataset to tax changes made for ideological reasons (Reagan tax cut, Clinton tax increase etc). The graphic below shows two estimates of the impact of a tax cut of 1% of GDP on real output. The red line shows the result using the conventional measure of tax changes — the change in cyclically-adjusted revenues. The blue line shows the estimates based only on the relatively exogenous tax changes we identified from the narrative analysis. 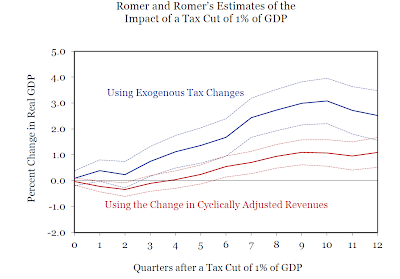 The graphic shows that limiting omitted variable bias results in larger and more statistically significant estimated impacts of tax changes. Prof Romer also argues that nobody has done a similar study (one that controls for motivation) to assess the true impact (on output) of a government spending increase. In its absence, there is no way to derive more definitive conclusions about the real impact of direct government spending increases nor adjudicate beween the relative superiority of tax cuts and spending increases.

She highlights the counterfactual problem of what would have happened without the ARRA in the US,

"The metaphor I find helpful is to a patient who has been in a terrible accident and has massive internal bleeding. After life-saving surgery to stop the bleeding, the patient is likely to still feel pretty awful and will have a long way to go before he is fully healed. But that doesn’t mean the surgery didn’t work. You have to judge the effect of the surgery relative to what otherwise would have happened. Without surgery, the patient would have died."

She points to three studies which, albeit incomplete, point to the ARRA playing an important role in propping up demand and ensuring that the economy did not get any worse.

She also points to similar omitted variable bias in the study of Alberto Alesina and Silvia Ardagna which has become the touchstone for advocates of expansionary contraction to argue that fiscal austerity is generally expansionary. They mined budget data for a large number of advanced countries over the past 35 years and identified large fiscal consolidations by looking for times when the cyclically-adjusted budget deficit fell sharply. They find that output tended to rise on average after these consolidations, especially those focused on reductions in government spending. She writes about the omitted variable bias in their analysis,

"Some of their fiscal consolidations weren’t deliberate attempts to get the deficit down at all. Rather, they were times when the budget deficit fell because stock price booms were pushing up tax revenues. Stock prices were a big omitted variable. They were driving the deficit reduction and were likely correlated with rapid output growth. This omitted variable made it look as though deficit reduction was expansionary, when it really wasn’t."

An IMF working paper, about which I blogged earlier, sought to address the deficiencies of the Alesina-Ardagna study and found that austerity programs hurt. Their dataset was limited to deliberate fiscal consolidation - for reasons unrelated to short-run macroeconomic developments - moves in 15 advanced countries over the last 30 years. They find that unemployment typically rose and output fell following such austerity programs.
Posted by Urbanomics at 6:55 AM