More debates on timing the exit from monetary accommodation

As the sub-prime crisis unfolded, the US Federal Reserve initiated a series of extraordinary "unconventional" monetary policy interventions to unfreeze the credit markets and inject ample liquidity. They included special liquidity injection facilities, reductions (to zero-bound) in the short-term interest rates, and increases in the Fed’s balance sheet (through purchases of longer-term securities). Fed emerged as the lender (to cash-strapped firms), buyer (of illiquid securities) and insurer (of all loans) of last resort.

Now with the green shoots of recovery on the landscape and fears about inflationary pressures taking hold, calls for exiting from the loose monetary and credit policy has been gathering steam. Those advocating an end to monetary accommodation point to the splendid recovery in the financial markets - so much so that the equity markets now appear to exhibit much of the same signs of irrational exuberance that was its characteristic throughout much of the last decade.

Raghuram Rajan recently wrote about the need to raise interest rates in the US from its current "ultra-low to low" so as to prevent the build-up of several possible incentive distortions. He argues that the ultra-low rates could bring about "dangerous financial imbalances, such as asset price mis-alignments, bubbles, or excessive leverage and speculation".

However, in an insightful recent post, Glenn Rudebusch (also here) of the San Francisco Fed differed with Raghu Rajan and wrote that if the economy will take years to return to full employment, "it seems likely that the Fed’s exit from the current accommodative stance of monetary policy will take a significant period of time". He points to a statistical regression of the funds rate over the past two decades on core consumer price inflation and on the gap between the unemployment rate and the CBO's estimate of the natural, or normal, rate of unemployment, captured in the graphic below. 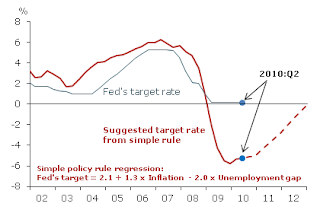 Since the nominal rates touched the zero-bound in late 2008, this regression rule would indicate that the rate will have to remain lower than zero for many months to come,

"The dashed line combines the benchmark rule of thumb with the Federal Open Market Committee’s median economic forecasts (FOMC 2010), which predict slowly falling unemployment and continued low inflation. The dashed line shows that to deliver future monetary stimulus consistent with the past—and ignoring the zero lower bound—the funds rate would be negative until late 2012. In practice, this suggests little need to raise the funds rate target above its zero lower bound anytime soon."

After the rates reached the zero-bound the Fed turned attention towards driving down the long-term bond yields with its massive program of purchasing securities (long-term Treasuries and agency debt). This unconventional monetary stimulus would presumably have had the impact of further loosening the monetary policy and thereby ensuring that the appropriate level of short-term interest rates would be higher than that shown in the earlier graphic. 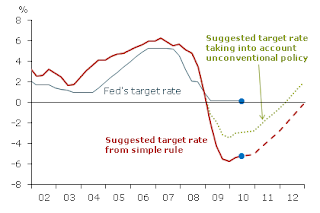 He also addresses the concerns about financial market mis-allocations by pointing to the example of Japan for the decade and half when despite short-term rates remaining essentially zero, there was no build-up of financial imbalances. He therefore argues that "the linkage between the level of short-term interest rates and the extent of financial imbalances is quite erratic and poorly understood" and prefers prudential financial regulation to restrain excessive financial speculation.

The more widely-used Taylor Rule too predicts (using the FOMC 2009 forecasts) that the interest rates should be ruling in the negative territory and not likely to return to the zero-bound till well into 2012. 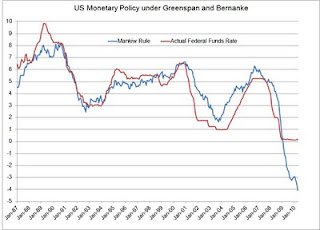 Andy Harless also has this post which constructs the Mankiw Rule by taking into account the impact of the unconventional monetary easing of 2009 and finds much the same result. See also Ben Bernanke on the Fed's exit strategy here.
Posted by Urbanomics at 5:14 AM

Increase in market liquidity has not necessarily translated into proportional increases in credit to the private sector. The Banks have increased their evaluation mechanisms to new highs and made it very difficult to obtain loans.
We need to look at the issue of how to make bank lend to projects without making it very difficult for entrepreneurs. Even this approach has the pitfall of being an indirect means of attacking unemployment.
We need to look at how to direct government spending towards employment generation more directly. The means of such spend could be through the private sector in addition to the public sector.