Limits to outsourcing and growth?

The autombile sector has been agog with the news of the high-profile recalls by Toyota Corp of nearly 2.3 million cars and trucks in eight models (including the market leading Camry and Corolla sedans) over partly depressed accelerator pedals made by the Canadian CTS Corporation. In order to protect its hitherto unmatchable reputation for quality, Toyota has also pre-emptively decided to stop making and selling these models in its US plants, which are the source of the problem. 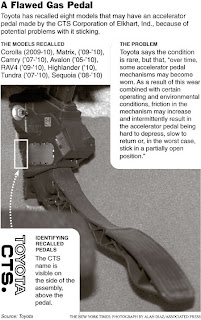 Apart from the damage it does to Toyota's reputation and bottom-lines, it also highlights attention on the flipside of uncontrolled outsourcing and maybe even the limits to how fast industrial organizations can grow.

In trying to meet its ambitious goal of achieving 15% market share of the global auto industry by 2010, Toyota has over the past decade undertaken radical reforms of its procurement practices, going beyond its traditional suppliers and building a global supplier network. As the Times writes

"As it has gained sales, Toyota has moved away from some of the business practices it adopted in its years of slow but steady growth. One example is its decision to buy parts from companies around the world, rather than from a small group of Japanese suppliers that have been longtime partners. For example, the pedals in the vehicles affected by the production and sales stoppages come from a supplier’s Canadian plant... The move to expand its supplier network was necessary to save money, given cost pressures on Toyota and other manufacturers... But the shift also makes it harder for Toyota to control quality."

The accelerator related recalls comes just a few months after its decision in September 2009 to recall 4.2 million vehicles, its largest ever, because a floor mat could cause the accelerator pedal to become stuck. Together, the two recalls cover 4.8 million vehicles, including 1.7 million affected by both. These recalls come on the back of an economic recession that has very badly affected automobile sales and profitability across the world.

However, the recalls and the hype surrounding it obscures the fact that all these models are otherwise excellent vehicles with exemplary safety and reliability records. Further, they form over a tenth of all vehicle sales in the US and there are (or were) more than 4 million of these vehicles on US roads. There have been just two fatal accidents (one with four deaths in December 2009), involving these more than 4 million vehicles in the US.

See also this NYT room for debate on the issue.

Update 1
Chris Dillow makes the point that while Toyota's strategy of using common parts across its product range while being cost-effective and helpful in reaping economies of scale run up against the tail risk. If something goes wrong with those parts, the entire company suffers. The more interesting issue is

"If we look at a business from outside - and most businesses are black boxes to outsiders - it will be very hard, maybe impossible, to distinguish between a truly successful manager and one who’s gotten lucky with tail risk. Could it be, therefore, that many high businessmen’s high reputation rests not so much upon genuine skill as upon luck?"

Posted by Urbanomics at 6:28 AM