I have written earlier about the role played by global macroeconomic imbalances in triggering or amplifying the ongoing global economic crisis here, here, and here.

In an NBER working paper, Eswar Prasad analyzed saving-investment balances, the composition of national savings, and the determinants of the evolution of household saving rates.

The characteristic features of the Chinese growth during this decade - net exports contributed an average of only 1.1 percentage points relative to average annual GDP growth of 10 percentage points in the 2000-08 period; investment accounted for half of GDP growth; share of private consumption in overall GDP dropped to about one-third (the lowest in the sample of Asian countries); employment growth amounted to an anemic 1 percent per year despite strong GDP growth. In contrast, India and Vietnam - have relatively high contributions of investment growth to GDP growth; finance part of their investment through net inflows of foreign capital (India’s current account deficit is small relative to its GDP, Vietnam’s current account deficit is much larger); have better average employment growth rates than China.

A few interesting graphs from the working paper

1. Here is a comparison of the savings-investment balances for the major Asian economies between 2000 and 2007. 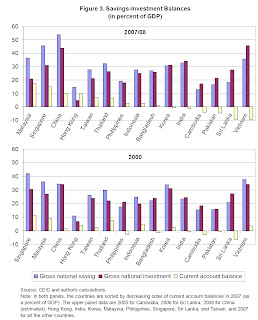 2. Composition of national savings for China, India and South Korea

3. Change in the composition of national savings rate - government, household and corporate - over the 2000-08 period 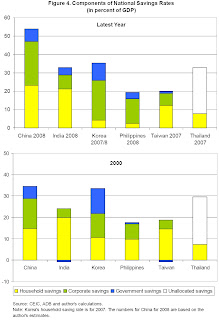 Corporate savings have been growing at a very fast pace, accounting for the bulk of increase in savings this decade. In the absence of adequate health insurance and welfare support, and chastened by the experience of the economic crisis of second half of nineties and the ongoing one, households will continue to save more unless governments intervene forcefully to remedy these deficiencies. 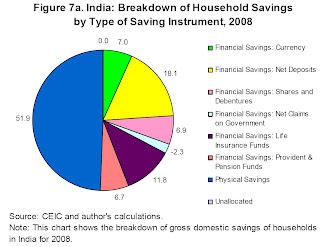 Update 1
Analysis of the global macroeconomic imbalances by Rogoff and Obstfeld and Ravi Jagannathan, Mudit Kapoor and Ernst Schaumburg. See also Rogoff's column here.
Posted by Urbanomics at 12:06 AM