"The state of macro is good."

"The central problem of depression-prevention has been solved."


"The economics profession went astray because economists, as a group, mistook beauty, clad in impressive-looking mathematics, for truth... the central cause of the profession’s failure was the desire for an all-encompassing, intellectually elegant approach that also gave economists a chance to show off their mathematical prowess.

This romanticized and sanitized vision of the economy led most economists to ignore all the things that can go wrong. They turned a blind eye to the limitations of human rationality that often lead to bubbles and busts; to the problems of institutions that run amok; to the imperfections of markets — especially financial markets — that can cause the economy’s operating system to undergo sudden, unpredictable crashes; and to the dangers created when regulators don’t believe in regulation."

So writes Paul Krugman (and also here and here) in an excellent essay chronicling the economic history of the last century, on how economists got it so wrong in predicting and resolving the ongoing economic crisis and the need for them to abandon their romanticised and sanitized versions of the economy, acknowledge the importance of irrational and often unpredictable behavior of markets, and accept that an elegant economic 'theory of everything' is a long way off.

And about the way ahead, he writes,

"Economics, as a field, got in trouble because economists were seduced by the vision of a perfect, frictionless market system. If the profession is to redeem itself, it will have to reconcile itself to a less alluring vision — that of a market economy that has many virtues but that is also shot through with flaws and frictions. The good news is that we don’t have to start from scratch. Even during the heyday of perfect-market economics, there was a lot of work done on the ways in which the real economy deviated from the theoretical ideal. What’s probably going to happen now — in fact, it’s already happening — is that flaws-and-frictions economics will move from the periphery of economic analysis to its center. There’s already a fairly well developed example of the kind of economics I have in mind: the school of thought known as behavioral finance...

So here’s what I think economists have to do. First, they have to face up to the inconvenient reality that financial markets fall far short of perfection, that they are subject to extraordinary delusions and the madness of crowds. Second, they have to admit — and this will be very hard for the people who giggled and whispered over Keynes — that Keynesian economics remains the best framework we have for making sense of recessions and depressions. Third, they’ll have to do their best to incorporate the realities of finance into macroeconomics." 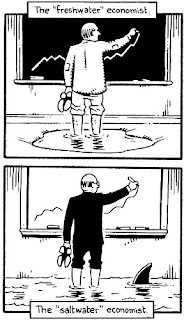 Update 1
Brad DeLong points to six reasons trotted out by economists arguing why the mortgage bubble cannot burst nor would it adversely affect the economy.

And Mark Thoma has this to say about the infatuation with macroeconomic models, "It's almost always possible to tweak the existing model in some way that rationalizes any new regularity discovered in the data that is at odds with existing theory. And without the ability to take the models to the lab and subject them to experiments, there's no way to immediately test the augmented theoretical structures (and as I've noted before, of course the models will pass the test with existing data, they were built to rationalize all the important known regularities in the data). It's only when a lot of time has passed and we have enough data to sort things out, or when we have large shocks of the type we've recently had, that we get the kind of information that we need to subject models to rigorous tests."

Update 2
Via Mark Thoma, Philip Lane draws attention to a few reasons why economists came up short. Forecasting has been preserve of public policy making economists (who require projections for policy formulation and fixing targets) and those working in financial institutions. Academic economists have remained out of this, thereby weakening the development of robust data crunching forecasting models. In fact, academic economists have remained stuck with issues related to work on "institutional design" (or design of policy frameworks that can deliver enhanced stability and lower the cost of crises should they occur) - the zero-bound problem in interest rate policy; macro-prudential financial regulation; counter-cyclical fiscal policies; tax policies vis-a-vis the property sector; the establishment of insurance devices such as reserve funds and rainy-day funds and other mechanisms to mitigate macroeconomic risks.

Lane points to the importance of highlighting contrarian scenarios, which help establish the limitations of conventional fair-weather models. As Lane writes, "The main goal in outlining low-probability but high-cost risk scenarios is not so much to alter ‘central’ forecasts but to encourage decisionmakers to adopt prudent strategies that are robust to the occurrence of the ‘disaster’ scenario."

Update 3
Robert Levine of Rand Corporation fits in Schumpeter's ideas on innovation and entrepreneurship and the OPEC induced global re-distribution of wealth to complete Krugman's analysis of the world macroeconomic history of the past few decades.

Update 4
John Cochrane defends the freshwater economists from Krugman's attack on the profession.

And Nick Rowe argues that in an economy with monetary exchange (as opposed to barter exchange), it is possible for "people (to) make plans to consume more, invest more, and pay more taxes with the same income". He writes, "I can plan to buy goods of greater exchange value than the goods I plan to sell, if I plan on reducing my stock of money. And if everyone plans to do the same, and if they realise those planned expenditures, they will be surprised to find their incomes rising by the same amount. There is no logical inconsistency in people planning to spend more with the same income in a monetary exchange economy. General gluts are always and everywhere a monetary (medium of exchange) phenomenon. The very distinction between Aggregate Demand and Aggregate Supply is a monetary (medium of exchange) phenomenon."

And about what is wrong with modern macro, Nick feels that finance and monetary theory need to be integrated.

Update 6
Stephen Mihm invokes Marvin Minsky to claim that "instability is an inherent and inescapable flaw of capitalism".

Update 7
Mark Thoma has the list of all the debate surrounding the problems faced by macroeconomics.

Update 8
Brad De Long feels that modern macroeconomic theories are not built on the seed of economic history, and therefore are unable to contextualize and explain the recurrance of bubbles, crashes, crises, and recessions. Mark Thoma has this discussion of Brad's column.

Update 9 (12/9/2014)
Noah Smith on why economists struggle to satisfactorily explain recessions. None of the standard explanations - monetary tightening, slower technological progress, financial market disturbances, etc - have been found to be satisfactory, not have there been good answers on how to recover from recessions.
Posted by Urbanomics at 12:33 AM