Impact of fiscal stimuluses across the world

An assessment of the $787 bn US fiscal stimulus package at its five month mark, by Christina Romer, claims that it has helped to slowdown the economic decline and change the trajectory of the economy by providing a crucial lift to aggregate demand when it needs it the most. It is claimed to have helped the economy bottom out much faster than otherwise and lifted growth by atleast two percentage points in the second quarter.

It estimates the future effects to be much larger and more longer-term in nature (in part because the job-creating infrastructure projects would account for a bigger share of the future outlays), tip GDP growth into positive territory by end of the year, job losses will lag the GDP turnaround. It however warns that even if the growth rate is robust, it will take substantial time to bring down unemployment and bring employment to normal.

But what could raise questions about the extent of relief the fiscal stimulus has provided is the fact that only $100 billion (most of it as tax cuts, assistance to states, and automatic ocial stabilizers than direct government spending) of the $787 billion ARRA package has filtered into the economy so far, with much of the remainder to be spent next year. However, this may suggest, as the assessment report claims, that the biggest impact of the fiscal stimulus was to ensure that the economy did not fall off the cliff. This in turn also means that a larger and faster acting stimulus could have minimized the declines further.

Of interest in India, is a global comparison of the stimulus spending across countries. It is clear that virtually "every major country has enacted fiscal expansions during the current crisis", though India (and parts of Europe) remain amongst those with the smallest stimuluses. 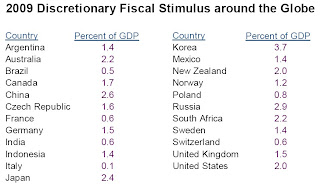 Further, comparing the change in the second quarter growth estimates of all the major economies of the world (from the forecasts of growth for the same quarter made last November, before the crisis had hit and countries had formuated their fiscal responses), it is clear that "things have improved more in countries that adopted bigger stimulus packages". In fact, the relationship, as shown in the grpah below, appears to indicate that a "country with stimulus that’s larger by 1% of GDP has expected real GDP growth in the second quarter that’s about 2 percentage points higher relative to the November forecast". Similarly, it has been found on comparing spending in the US states on Medicare that those who spent the largest on their matching share of Medicaid lost fewer jobs. 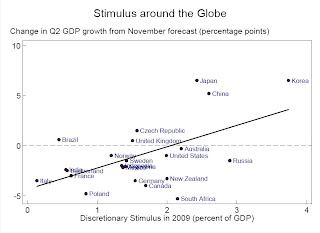 However, in the case of India, the graph shows that the economy has declined by 2.5% over the November forecast. It feels that the fiscal stimulus has been too weak to have any effect on the economy. Given the fact that India was amongst those least affected and therefore not likely to suffer a precipitous decline in any case, the effect of the simulus appears to have been marginal.

The latest RBI report though reveals a different picture. Contrary to the earlier projections of 5.3% for second quarter of 2009, the present projections estimate a growth of 6%, or an increase of 0.7 percentage points. However, assuming the trend projection of 8.5% for second quarter (based on average growth rates in recent years), the decline of 2.5 percentage points matches up with the decline attributed by the Romer estimate. Even taking a more optimistic 9% trend projection, or a decline of three percentage points (9-6=3), the effect of the stimulus amounting to 0.6% of GDP would be minimal. The bang for the buck also has been one of the lowest, indicating poorly directed or mis-directed spending.

Update 1
Times has a series of articles on how the US, China, Europe, and India responded to the crisis with their stimulus spending measures. They included tax cuts, direct spending, wage subsidy (to ensure that short-term unemployment does not become long-term unemployment), cash for clunkers, welfare payments and assistance etc.

Update 2
A Times op-ed points to the possibility of a jobless recovery, given teh need to not only recover lost ground and take back those laid-off but also absorb the 2.8 million new workers who have joined the labor force during the recession. An indicator of this, the long-term unemployment rate — the share of the unemployed population out of work for more than six months — is now a record 35.6%.

See also this article about why the conventional views on business cycles, which predict consumer spending and investment driven economic recovery and job growth in teh aftermath of a downturn, may not offer adequate explanation now given the depth of the recession. This is especially true given the critical role of finance and changing appetites for risk that can influence economic growth and the impact of globalization that has created a global labor force.

Update 3
Interactive graphic indicating the extent of fiscal stimulus spending across the world.
Posted by Urbanomics at 7:41 AM