The Government of India is proposing a new Wholesale Price Index (WPI), with 2004-05 as the base year, from January 1, 2009. The recent surge in inflation and the need to move into a system which reflects the changing economic reality more accurately is seen as being behind this change.

The existing WPI series, having 1993-94 as the base year, covers 435 commodities, which include 98 "primary articles", 318 "manufactured products" and 19 "fuel, power, light & lubricant" items. The proposed 2004-05 base series will have 1,224 commodities. While the "primary articles" and "fuel" groups will have more or less the same number of items — 105 and 19, respectively — there would be as many as 1,100 "manufactured products". The prices of each of these individual commodities is proposed to be fixed by taking atleast five price quotations. 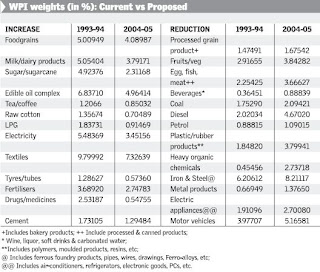 Unlike other major economies, where inflation figures are published on a monthly or quarterly periodicity and the focus is on WPI, India has weekly figures with focus on CPI. The new arrangement proposes to switch over to the practice being followed elsewhere. The reduced weights for food items (4.09 proposed against 5.01 now) are necessitated by the need to differentiate between core and headline inflation. While the former discounts for the sharp variations that generally mark food and energy prices, and conveys a more accurate representation of the economy.

It is feared that with the reduction in weights of essential commodities, the impact of inflation on the common man may not be accurately captured. Do not also be surprised with allegations of tempering with figures to suit political imperatives in an election year. 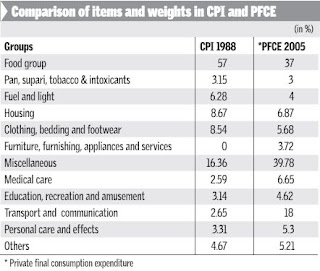 Update 3 (7/4/2010)
India has more inflation measures than most other countries. There are four consumer price indices (CPIs), and one each of Wholesale Price Index (WPI), gross domestic product (GDP) deflator and personal consumption deflator derived from national income accounts. CPIs and WPI are monthly, while the two deflators are quarterly. Many countries have a producer price index (PPI), but India doesn’t.

Contrary to popular misconception, WPI and PPI are not the same: Apart from coverage, the key difference between the two is that WPI reflects changes in the average cost of production including mark-ups and taxes, while PPI measures price changes of transacted goods at the gate excluding taxes. PPI is a better measure than WPI.

While almost all countries focus on CPI inflation for policy perspective, India prefers to focus on WPI inflation. In India’s case, WPI ends up doing the job done by CPI in most other countries, despite its bias, since the rate of change in WPI is normally bigger than that in CPI. Changes in international commodity prices are more quickly and more completely captured in WPI than in CPI.

It is not clear what portion of WPI inflation RBI can actually control through its monetary management. There is not much RBI can do about the food composite index (26.9% weight in the WPI basket). The fuel-related sub-index (14.2% weight in WPI) has a component that is administered (for example, petrol and diesel) and a component that is free to adjust to international prices. RBI’s monetary management has little effect on both, as the price elasticity of demand of the free component is typically low, while the government decides the administered component. That leaves the non-food manufacturing component that has a weight of 52.2% in the WPI basket. This has a large component that is affected by global prices, not to mention the broader push on physical infrastructure by the government
Posted by Urbanomics at 12:46 PM