The Bush administration announces a vast bailout (more here) of financial institutions in the United States, with unfettered authority for the Treasury Department to buy up to $700 billion in distressed mortgage-related assets from the private firms. This plan to buy up mortgage securities shunned by all banks, would raise the national debt ceiling to $11.3 trillion. And it would place no restrictions on the administration other than requiring semiannual reports to Congress, granting the Treasury secretary unprecedented power to buy and later resell mortgage debt. 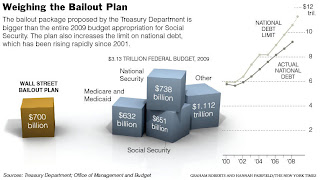 Though the details of the plan are being worked out, it is clear that the US Treasury Department will now assume responsibilities similar to that of large debt restructuring institution. Of crucial importance would be the price discovery mechanism for the securities being purchased and the conditions imposed on the executives of the firms selling them. Besides determining the final cost of the bailout to the tax payer, it will also be critical in containing moral hazard dangers. The terms of the bailout contained in those details will have to send a strong enough message, punishing the greedy and reckless investors and their managers. As Gretchen Morgenson argues in 'Your money at work, fixing others' mistakes', the challenges facing the structuring of any such deal are formidable.

Identifying the beneficiaries of any such bailout is extremely difficult, even impossible. AIG had underwritten Credit Default Swaps (CDS) worth $441 bn, and many of the counterparties (localizing and identifying whom is impossible) to these derivatives contracts are wealthy and greedy investors, who now stand to benefit from this bailout at tax payers benefit.

Ironically, if this plan goes through in its present shape, Hank Paulson will be the best person to administer it. He would only have to cast off the cloak of a Treasury Secretary and don his previous role as head of Goldman Sachs. The only difference is that he would now be managing the tax payers money!
Posted by Urbanomics at 2:34 PM