PPPs and Value for Money?

In the aftermath of the collapse of Carillion and the NAO report, FT has been leading the sceptical scrutiny on PPPs. I am extracting a few snippets which convey the story.

The headline takeaways on value for money from PFI,

In 1989, the water industry in England and Wales was privatised with no net debt. Yet almost three decades on, it has built up borrowings of £42bn. All but three of the 10 English water companies have been taken off the stock market by private equity investors — many backed by foreign sovereign wealth funds and pension schemes. In the meantime, all the industry’s post-tax profits have been carried off in the form of dividends. Shareholders’ funds have barely budged since 1989. 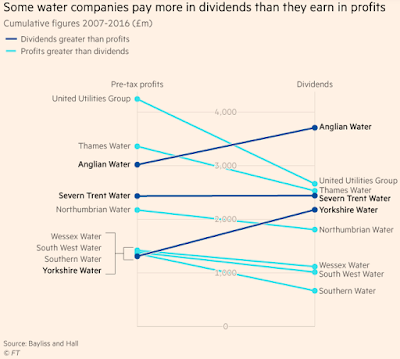 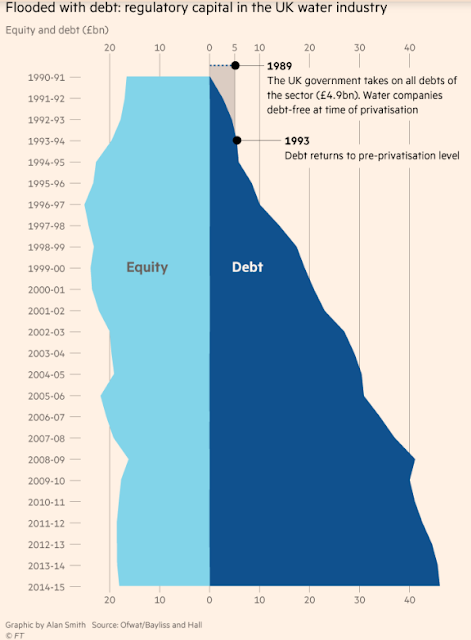 The comparison with Scottish Water, which was not privatised and remained public, is instructive,

Yet unlike the English utilities, it remains relatively unleveraged. Its borrowings of £3.8bn represent just 48 per cent of the value of its regulated assets, as against the 65-80 per cent that is prevalent in England. Meanwhile, the average bill from Scottish Water was £357 last year — 10 per cent lower than the English average of £395.

And in terms of benefits to consumers, in UK

A study by Greenwich university claims that refinancing utility debt and equity with government bonds and scrapping dividends could save £2.3bn a year. That is equivalent to a saving of almost £100 off the average £400 water bill.

... and elsewhere in Europe,

A study of French water services in 2004 found that the price of privately-delivered water was 16.6 per cent higher than in places where municipalities delivered the service.

And from the other big example of privatisation, railways,


The cost of running the UK’s railways is 40 per cent higher than it is in the rest of Europe, according to a 2011 government report by Sir Roy McNulty, the former boss of UK aviation group Short Brothers who has long experience in transport regulation... Since privatisation, the bill has mainly been shared between the taxpayer and the passenger. The contribution from the state has almost doubled from £2.3bn in 1996 to £4.2bn in real terms in 2016-17, despite a conscious decision in recent years to push more of the cost on to users’ shoulders. Ticket prices have risen: they are now 25 per cent higher in real terms than in 1995 and 30 per cent higher than in France, Holland, Sweden and Switzerland. The latest average rise in fares of 3.4 per cent, announced on New Year’s Day, was greeted with outrage. 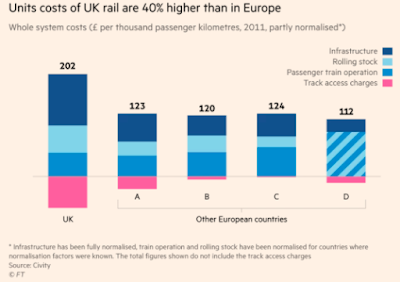 Like with water, operational efficiency gains and attendant cost reduction have remained elusive, and asset stripping has proceeded apace,


Despite the vastly expanded usage, the network’s costs have not obviously come down relative to its income. According to the 2011 report, unit costs per passenger kilometre were roughly 20p in 2010, much the same as they were in 1996... Critics argue that train operators are able to make returns, and pay themselves dividends, despite contributing very little in the way of risk capital. While operating margins of 3 per cent are not high, the train companies paid nearly all the £868m operating profits between 2012-13 and 2015/16 as dividends — £634m in the four year period. 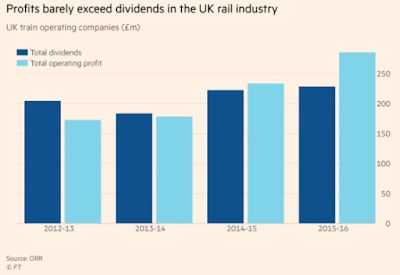 A sense of the complexity of such outsourcing and private participation,


“The train you catch is owned by a bank, leased to a private company, which has a franchise from the Department for Transport to run it on this track owned by Network Rail, all regulated by another office, and all paid for by taxpayers or passengers,” says John Stittle, a professor of accounting at Essex university. “The complexity is expensive.”

Finally, on the public mood,

An October poll conducted by the UK’s far-from-socialist Legatum Institute showed 83 per cent of respondents favoured the nationalisation of water. For energy, the figure was only slightly lower, at 77 per cent.

But who will listen, since the regulators have been captured and the liberals are blindly anti-state and pro-market,

Ofwat, for instance, has been criticised for its focus on investors rather than customers. While the watchdog sets aside two days a year to give presentations to the City of London, there is no forum for it to meet customers.

With regulatory capture and renegotiations, the original spirit of privatisation has been cast aside in railways too,

As with other privatised monopolies, competition was supposed to ensure lower prices and sharper services. But in recent years this has faded, raising questions over the legitimacy of the franchising system. A third of train operating companies now hold their franchises by so-called “direct awards” from government, rather than auction. Successive governments, out of an apparent desire to keep the private sector onside, have been reluctant to wield their powers against poorly performing franchises. Only one train operator has ever been stripped of its contract — Connex for poor performance in south-east England in 2001 and 2003. Three more have walked away after overbidding for contracts, with minimum penalties. Last month, the government allowed Virgin Rail and Stagecoach to terminate their East Coast line franchise three years early, saving them the need to write a £2bn cheque to the government under previously agreed revenue growth forecasts. Yet with only a handful of operators bidding for franchises, the duo may end up operating the line again — on more profitable terms.

This verdict of rail privatisation contrasted with public ownership comparator is striking,

There is a growing consensus among both executives and industry experts as well as the public that Britain’s unique attempt to create competition on Britain’s rail network has not delivered. While it has led to more services, and encouraged more users to pay higher prices, it has not unleashed the productivity improvement necessary both to upgrade the network and stabilise the network’s finances. Over the same period, for instance, London’s state-owned metro network, Transport for London, has grown just as quickly and delivered much more state-of-the-art investment.

No wonder the likes of Corbyn and Trump look attractive!
Posted by Urbanomics at 1:52 PM

Do you think there are lessons to be learnt from this PPP evidence, that are relevant to "insurance model of tertiary health care" (public funded but service delivery by private players) in the Indian context?

If the decision of public vs. insurance model of health care is a matter of comparison between the capacity to run public hospitals vs. capacity to regulate private players... are we stuck in a trap where we don't have either of these capacities? In this context, which capacity is easier to build from the current state?

You should link this to the post on corporate ethics in India. What is the difference? May be, one is too sophisticated and one is not. But, does that matter to the outcomes?

You might also want to link this post to the NYT page link you had given in your 'Weekend Reading Links':

You had suggested this to the World Bank President Kim. But, it also is a suggestion to governments.

But, now, let us go philosophical.

How do we solve this? If governments are captured, how do you expect the government to extricate itself out of it? It is now powerless. Ex-ante, it had. Now, it does not. It is captured.

Without a spiritual outlook and detachment on the part of the rulers - they minimise the risk and incidence of capture - the cycle of capture and releae and capture will be endless.

Some change agents come with their own agendas.For example, is Trump draining the swamp? I doubt because he has just received a certificate from Lloyd Blankfein of Goldman Sachs. That says it all.

Now, if and when he finally goes, after one term or two terms or whenever, the old elites will be back in the saddle - the elites who gave us financial de-regulation, Public-Private Partnerships, etc.

But, amidst all this, some good have happened. Millions of Chinese workers have had better lives than they would have. Few millions of Indian software workers and their families benefited from globalisation. The Philippines and Mexico workers have benefited.

So, amidst the capture, let us count the small blessings because 'WE (the World Economy) are like this only'.