John Maynard Keynes said, "When facts change, I change my views. What do you do sir?" The latest adherent to this appears to be the IMF. In the ferment that followed the sub-prime crisis and which continues till date, the IMF has been the undisputed thought leader in revisiting many fundamental tenets of conventional wisdom in economics.

It has initiated debates on a higher inflation target, bigger fiscal deficit, some form of capital controls to stem flows volatility, and expressed concern at the distributional consequences of competitive policies and free trade.

The latest salvo comes in the form of an article in the latest edition of its F&D magazine which can only be construed as the formal obituary of the neo-liberal order, popularly embodied in the Washington Consensus. The two central tenets of this were competition, achieved through extensive deregulation and globalization, and shrinking the role of the state, through large-scale privatization and fiscal consolidation. The article questions two of the important elements of this policy push - elimination of capital controls (financial openness) and fiscal consolidation. Its findings are three-fold,

One, the benefits in terms of increased growth seem fairly difficult to establish when looking at a broad group of countries.­ Two, the costs in terms of increased inequality are prominent. Such costs epitomize the trade-off between the growth and equity effects of some aspects of the neoliberal agenda.­ Three, increased inequality in turn hurts the level and sustainability of growth. Even if growth is the sole or main purpose of the neoliberal agenda, advocates of that agenda still need to pay attention to the distributional effects.­

The headline finding on unrestricted capital flows is,

Some capital inflows, such as foreign direct investment—which may include a transfer of technology or human capital—do seem to boost long-term growth. But the impact of other flows—such as portfolio investment and banking and especially hot, or speculative, debt inflows—seem neither to boost growth nor allow the country to better share risks with its trading partners... Although growth benefits are uncertain, costs in terms of increased economic volatility and crisis frequency seem more evident. Since 1980, there have been about 150 episodes of surges in capital inflows in more than 50 emerging market economies... about 20 percent of the time, these episodes end in a financial crisis, and many of these crises are associated with large output declines 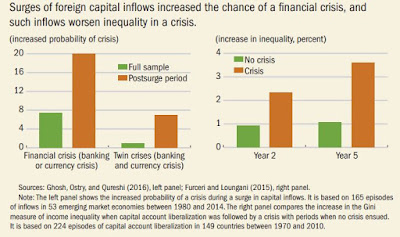 And on fiscal consolidation is,

The need for consolidation in some countries does not mean all countries... Markets generally attach very low probabilities of a debt crisis to countries that have a strong record of being fiscally responsible. Such a track record gives them latitude to decide not to raise taxes or cut productive spending when the debt level is high. And for countries with a strong track record, the benefit of debt reduction, in terms of insurance against a future fiscal crisis, turns out to be remarkably small, even at very high levels of debt to GDP... The costs of the tax increases or expenditure cuts required to bring down the debt may be much larger than the reduced crisis risk engendered by the lower debt... Faced with a choice between living with the higher debt—allowing the debt ratio to decline organically through growth—or deliberately running budgetary surpluses to reduce the debt, governments with ample fiscal space will do better by living with the debt.


Austerity policies not only generate substantial welfare costs due to supply-side channels, they also hurt demand—and thus worsen employment and unemployment... in practice, episodes of fiscal consolidation have been followed, on average, by drops rather than by expansions in output. On average, a consolidation of 1 percent of GDP increases the long-term unemployment rate by 0.6 percentage point and raises by 1.5 percent within five years the Gini measure of income inequality.

It is impressive that IMF has been willing to revisit such holy cows, for very long the central tenets of its own policies, and widely and aggressively prescribed by the institution.
Posted by Urbanomics at 7:13 AM

Reminiscence of late 80s when UNICEF published "Adjusting with a human face" (1987), a strong report against IMF's 'Structural Adjustment Programmes' that forced countries to cut down their welfare spending (prioritize productive sectors over welfare sector).

UNICEF's argument was also the same in 1987 - costs of cutting down expenditure on welfare (education, nutrition etc) override the benefits of temporary consolidation or prioritizing spending on 'productive sectors where the short term return is high'.