There has been an intense debate about the utility of fiscal stimulus in boosting aggregate demand during such deep economic recessions.

Supporters like Paul Krugman have based their arguement on the claim that private sector demand (both consumption and investment) has fallen so sharply that only the government can replace it. He points to research by Jan Hatzius of Goldman Sachs who finds the private sector financial balance (defined as the difference between private saving and private investment, or equivalently between private income and private spending) has risen from -3.6% of GDP in the 2006Q3 to +5.6% in 2009Q1. This 8.2% of GDP adjustment is already by far the biggest in postwar history and is in fact bigger than the increase seen in the early 1930s. He represents this in terms of the graphic below. 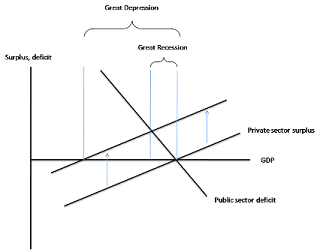 The graph shows the private sector surplus and the public sector deficit, both as functions of GDP. He writes,

"The private sector line is upward-sloping because higher GDP means higher income and more savings, the public-sector line is downward-sloping because higher GDP means higher revenues. In equilibrium the private surplus equals the government deficit (not strictly true for any one country if you add in international capital flows, but think of this as a picture for the world economy).

What we’ve had is a sharp increase in the desired private surplus at any given level of GDP, due to a combination of higher personal saving and reduced investment demand. This is shown as an upward shift in the private-surplus curve. In the 1930s the public sector was very small. As a result, GDP basically had to shrink enough to keep the private-sector surplus equal to zero; hence the fall in GDP labeled 'Great Depression'. This time around, the fall in GDP didn’t have to be as large, because falling GDP led to rising deficits, which absorbed some of the rise in the private surplus. Hence the smaller fall in GDP labeled 'Great Recession'."

However, opponents argue that any Treasury intervention in the savings market to boost demand would increase the national debt and also drive up interest rates, and thereby force businesses to cut back on investments. And any more Fed action to reduce unemployment and boost spending and income is opposed on the grounds that the market is so awash with liquidity that spending is not constrained by liquidity shortage, and that further liquidity injections would fuel inflationary pressures in the future without boosting employment and spending in the present. But as De Long writes,

"Both of these arguments are comprehensible; each might well be true. But they cannot both be true at the same time. Either the economy is so awash in liquidity that the Federal Reserve cannot do much to boost spending—in which case additional spending by the government won’t generate any substantial rise in interest rates. Or additional government spending will crowd out investment as businesses scramble for liquidity and interest rates rise—in which case the economy is not awash in liquidity, and quantitative easing by the Federal Reserve could do a lot right now to boost spending and employment."