1. MR points to this article by Samo Burja about the remarkable stability and prosperity of Botswana despite several extenuating circumstances and contrary to the orthodox theories on international development. It attributes the country's success to "well-executed succession between presidents".

2. A very informative Livemint primer on the impact of demonetisation. This coupled with the return of 99% of the currency under circulation points to little having changed on the cash front. See also this. And this graphic from JP Koning is instructive. 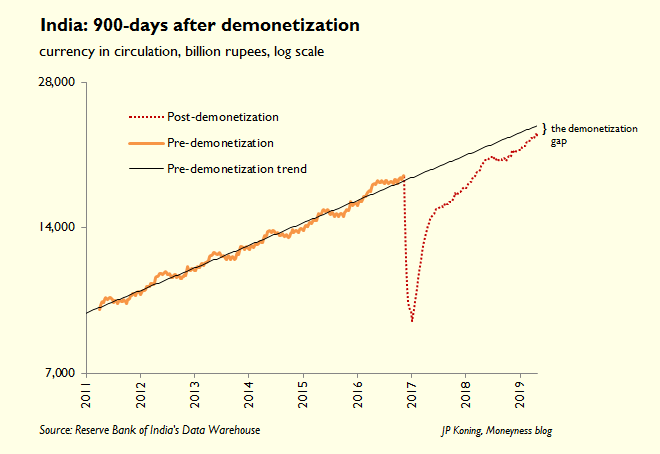 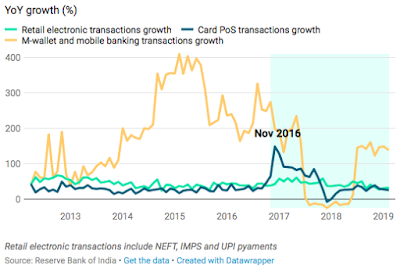 3. This article points to the rise and rise of groupthink and elite consensus that censors dissenting views in international conference circuits.

You can understand why provocative outsiders are not always welcome. Inviting them in might risk someone rudely pointing out that Mr Griffin just paid $238m for the most expensive apartment in the US, that Mr Schwartz ran Bear Stearns before its collapse or that Mr Dalio reportedly took home $2bn last year. Gadflies can be exasperating individuals, too, and unwilling to engage constructively with the people they criticise: the Milken Institute’s CEO revealed that there had been a dismaying increase in the number of people refusing to share panels with people holding different views.

4. On the context of the debate on inflation targeting, Scott Sumner reiterates the case for NGDP targeting in stabilising economies faced with demand and supply shocks.

5. Finally a Bates Medal for macroeconomics to Emi Nakamura. This from Noah Smith and this from  Kevin Bryan.

As Noah Smith points out while her work has supported the New Keynesian school shown that "even very small amounts of... price stickiness can generate large recessions, and make the economy very sensitive to changes in monetary policy", she has also questioned the efficacy of standard monetary policy responses. She has shown "that interest rate cuts tend to boost expectations of future growth without raising expected inflation much",  questioned the assumption that "inflation causes as much harm to the economy as unemployment", and the assumption that "a central bank always has the ability to fight recessions by lowering interest rates" including questioning the efficacy of policies like forward guidance. In contrast, her work points to fiscal policy being a more promising lever to respond in such situations.

6. Fascinating graphic of the direct relationship between economic output and the daily calories that come from animals and their products. 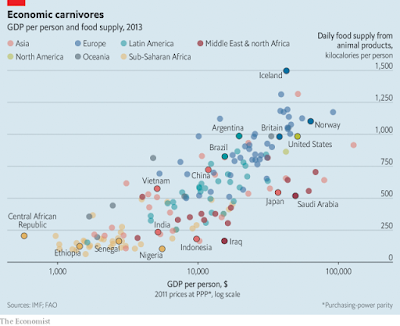 And like with most things, China is the driver of the growth in global meat production.

Between 1961 and 2013 the average Chinese person went from eating 4kg of meat a year to 62kg. Half of the world’s pork is eaten in the country.

7. Andy Mukherjee highlights the biggest problem with Indian capitalism, the behaviours of its capitalists and the corporate governance culture it breeds. Finance, or more specifically investors and lenders, have been a critical pillar to disciplining and making capitalism efficient. This unfortunately, for a variety of reasons, is deficient in Indian capitalism,

Almost every large business failure in India today involves providers of outside capital — and their agents — giving insiders a free pass to maintain control using other people’s money, destroying value in the process... consider the problems brewing in India’s mutual funds industry, which lent money to media mogul Subhash Chandra against his shareholding in Zee Entertainment Enterprises Ltd... When Chandra’s leveraged bets on infrastructure ran into liquidity problems, the mutual funds agreed not to sell the Zee shares they held as collateral. The fund managers now have the chutzpah to tell investors that the net asset value for their maturing plans isn’t available in full — and won’t be until Chandra can find a buyer for Zee. Even more shockingly, the bilateral loans to Chandra, masquerading as bonds, are still rated A. Relationship lending is to be expected in a state-dominated banking system prone to rigging by crony capitalists. But relationship-based fund management? That shows the extent to which even the private sector is compromised. Business “promoters,” as they’re known in Indian law, have used a mix of personality cult and proximity to political power to terrorize the ultimate providers of outside capital.

8. Livemint again points to some proxy indicators of economic growth associated with the current and previous governments.

9. In the context of the latest impasse on the US-China trade talks, Ananth points to this brilliant tweet by Chris Balding characterising the Chinese diplomatic playbook,

2. Urging people to continue to talking without specifying what the substance or issue that requires resolution and even not acknowledging that the issue is a problem

3. Backhandedly complementing or apologizing. We regret that you're an A$$ monkey that leads to this problem. For that we apologize. Classic Chinese.

4. Insisting that the only change that needs to happen is on the other side of the table. This benefits all man kind and the benefits are there and we urge you to change to help realize that objective.

Posted by Urbanomics at 6:26 PM