Livemint has a rare statistical peek at India's higher judiciary, with this article on a study documenting the time taken between court hearings for different categories of cases across High Courts in India. The graphic below documents the wide variance in hearings per judge and the time between hearings across High Courts. 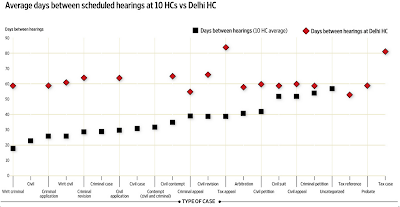 You cannot improve what you cannot measure. Given the near total absence of dynamic information about court work, performance monitoring of judiciary is a non-starter. In this context, the words of Justice Louis Brandeis who is reported to have said with reference to transparency that "sunlight is said to be the best of disinfectants", carries great relevance. Nowhere is it more necessary than our judiciary. And data and its analysis can shine light on the performance of India's judicial systems.

Admittedly the judges are over-burdened with case load. But much the same could be said about every public functionary from the ANM to the District Collector. Answers to each of these questions and more, and their comparative analysis across judges and courts, would undoubtedly be a massive step in ushering greater transparency to the functioning of India's judicial system.
Posted by Urbanomics at 5:30 AM

Email ThisBlogThis!Share to TwitterShare to FacebookShare to Pinterest
Labels: Judiciary

There is an organisation design defect in Indian judicial system when compared to UK, US, Australia and Canada. In all the latter jurisdictions, the court administration is supported by a separate agency, often a statutory body, specialising in court administration. In India, it is managed by each court on its own. This creates the problem of ad hoc procurement and all advantages of economies of scale is completely lost. In India the current debate is overtly focussed on the second order problem without solving the first order issue - who will manage the courts and collect the data?

I wonder how can any judge do justice to 150 hearings in a single day?
Even assuming a 12 hr work day that would mean about 12 hearings / hour or 5 mins per hearing. Could you please educate me on what i am missing?

Pratik, thanks for the comment. It is a very interesting observation.. have heard about it but never thought about it...

for sure, there are many low-hanging fruits from improving court administration and we should do that. but, i am not sure whether a separate court administration will make much dent on the problems facing our courts - heavy case-load, too many adjournments, over-reach (see the example of tribunals, which have become another layer of judicial process), mis-placed prioritization etc.

mukund, thanks for the comment. you are not missing anything there and are spot on with the single biggest challenge...

but processes could be disciplined to reduce the case-load by expediting hearings (limit the current practice of advocates colluding with the court administrators to delay hearings and getting repeated adjournments even on civil cases), more diligence when accepting/admitting cases, more restraint with over-reach (judicial over-reach has stymied the functioning of tribunals), more court-time (why have the british era long holidays!), and for lower courts pre-litigation forums, lok adalats etc. and these have to be complemented with, as pratik wrote, more efficient court administration and maybe, more benches.

what do you think are the options.